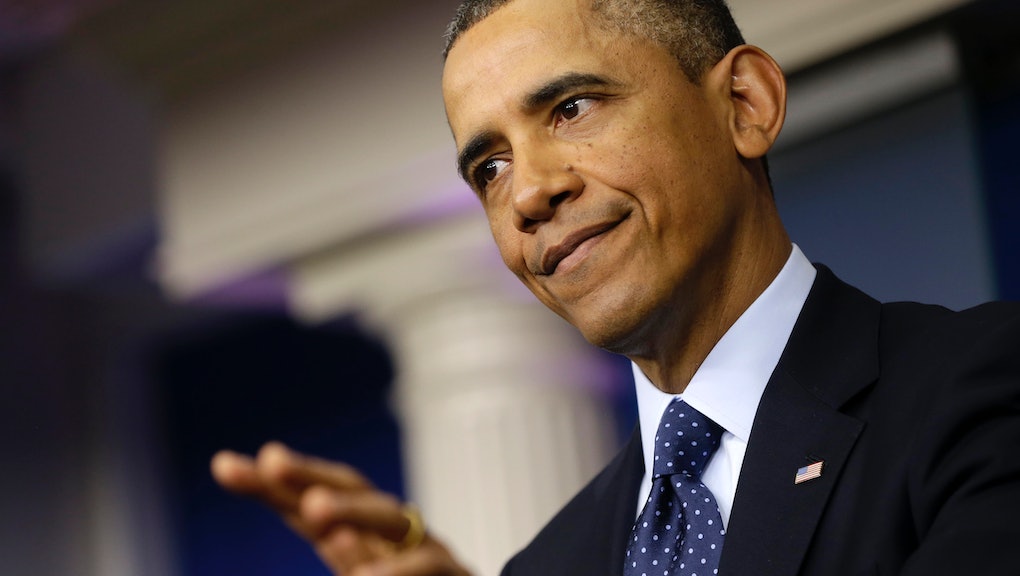 Seems simple, right? President Barack Obama is hoping such straight talk can convince Americans — and Republicans in Congress — that the country needs to act on climate change.

In a New York Times interview, Obama spoke at length about the difficulty in dealing with climate deniers in government: "Look, it's frustrating when the science is in front of us. ... We can argue about how. But let's not argue about what's going on. The science is compelling. ... The baseline fact of climate change is not something we can afford to deny.

Part of a plan: Obama's comments come on the heels of a major climate change initiative — the largest undertaken by any president. He announced plans Monday to bypass Congress and force power plants to cut emissions by 30% over 15 years. In addition to cracking down on coal plant emissions, the plan aims to push alternative forms of energy, including wind, solar and nuclear.

It may not always be good politics — just ask Kentucky — but it's a concrete plan for a president whom scientists, businesses and environmental advocates had been calling on to do more than talk about curbing CO2 emissions.

Not a bright future: Some of those same researchers and executives, though, aren't very optimistic about our ability to turn the tide. A large part of Antarctica reached the "point of no return" earlier this year, and some experts think the whole planet may be past that point, too.

The National Climate Assessment released last month presented dire warnings: 2012 was the hottest year ever in the U.S., and the 2000s were the hottest decade. We're seeing more droughts, flooding and wildfires than before, and sea levels continue to rise and consume our coastline. Obama need only point to these very real consequences when pitching his plan.

While combating climate change can seem close to impossible, convincing Republicans in Congress may be even harder. Many continue to doubt that climate change is caused by humans — or even happening at all. Rep. Jeff Miller (R-Fla.) broke out the most ridiculous argument yet during an MSNBC interview Monday. If humans cause climate change, he asked, "Why did the dinosaurs go extinct?"

So yes, science is science. But politics is politics too, and Obama and other world leaders will need a near-perfect combination of both to make any climate progress.