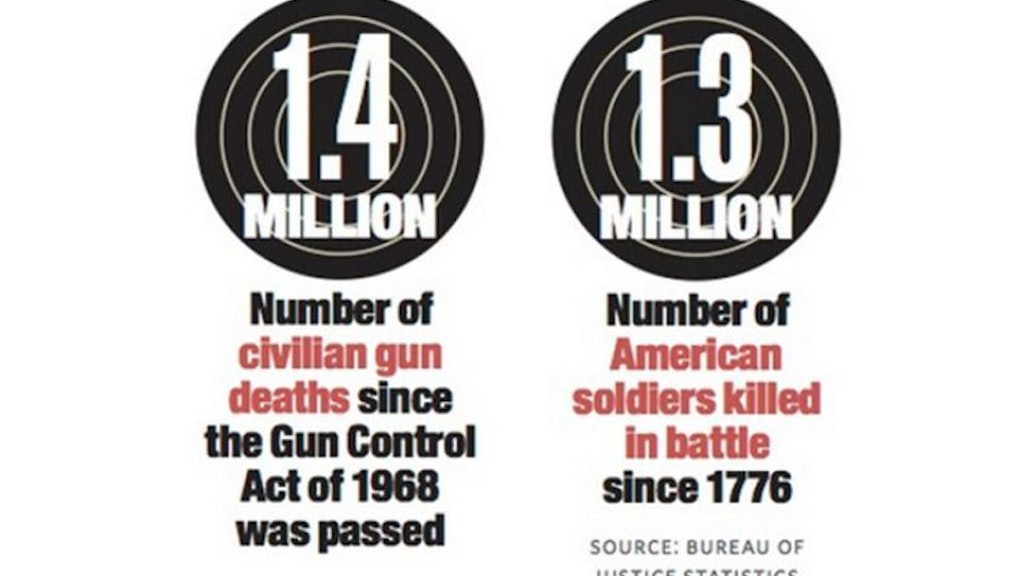 One Crazy Statistic Tells You Everything You Need to Know About U.S. Gun Laws

The comparison has been verified by PolitiFact, which tallied up FBI and Centers for Disease Control figures for gun deaths and looked at Congressional Research Service data for war casualties. While Politifact's figures come out to 1.2 million combat deaths, other roundups that include minor conflicts round out to 1.3 million.

The background: If you've seen this meme going around recently, it's probably because of the tragic string of recent shootings, including one at a high school in Portland, Oregon on Tuesday that left one student and the shooter dead.

1968 is an ideal starting point for measuring gun deaths because it marks the passage of Lyndon Johnson's major gun control policy, part of his Great Society reforms. The law came after a series of high-profile assassinations in the 1960s, including those of Martin Luther King Jr., Malcolm X and John F. Kennedy.

Johnson's law mandated the licensing of all arms dealers who sold across state lines and most who sold within. Licenses went up in price, and the government was given more power to regulate dealers. The law also prohibited minors, convicted felons and "adjudicated mental defectives and any person who had been committed to a mental institution" from buying a gun from a licensed dealer.

Still not working: As the above statistic illustrates, though, the country still has a way to go. (After all, it's not as if the country has been particularly averse to military action in the past few centuries.) There is good news — gun deaths are dropping, along with violent crime in general — but our gun control laws still allow things like this, and this, and this, and this, and all of this to happen. And that's just over the past week.