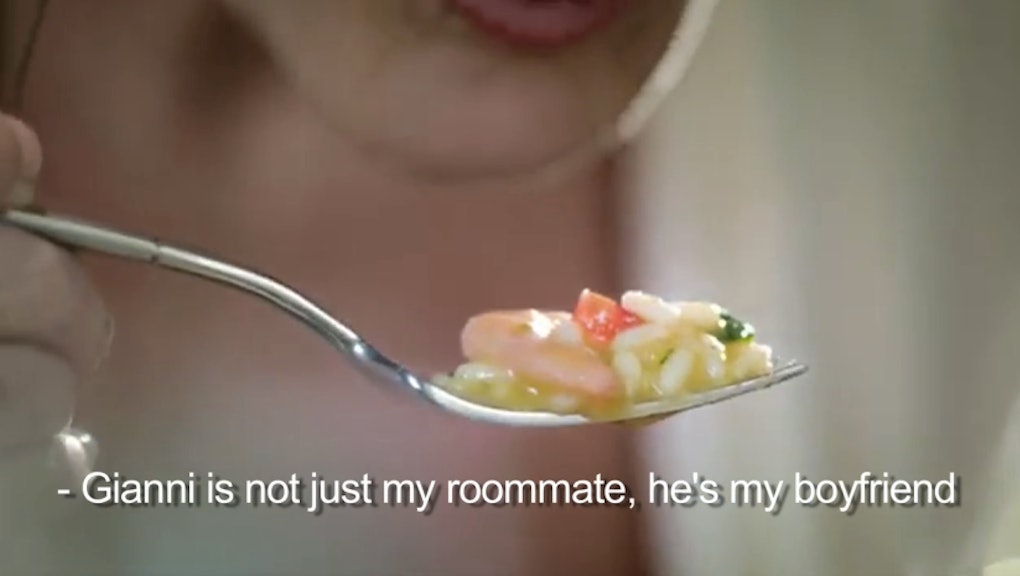 With a heartwarming new commercial, the Italian pasta industry has become a very unlikely champion of gay rights.

Frozen food company Findus' latest spot for its line of microwaveable pasta features a young man, Luca, telling his mother that his roommate is actually his boyfriend as the three prepare dinner together.

Luca's mother is delightfully unfazed, replying, "Honey, I knew that already! And he's a great cook!"

The ad ends, as so many good things in life do, with everyone eating pasta.

Notably, Findus' campaign comes less than a year after Guido Barilla, chairman of the Italian pasta giant, infamously told an Italian radio program, "I would never do an advert with a homosexual family ... if the gays don't like it they can go an eat another brand."

Barilla's comments drew widespread ire, and the company quickly backtracked by hiring a "chief diversity officer" and stating that it was planning another, "more inclusive" ad campaign. It looks like Findus has beaten them to the punch.

Reportedly the first openly gay-friendly ad in a country plagued by accusations of homophobia, the Findus campaign is sending a much-needed message of acceptance: One recent Italian study found that a whopping 73% of LGBT individuals reported facing discrimination and prejudice.

Demonstrators at a sit-in at St Peter's Square in Rome. Image Credit: Getty

Though the inclusion of progressive social messages in ads has spurred negative reactions in the past (Cheerios' spot featuring a mixed race family, for example, inspired both admiration and a disturbing outpouring of racism), these campaigns remain a useful means of increasing acceptance and understanding of discriminated groups. As Lorenza Antonucci wrote in Slate following the Barilla scandal and subsequent boycott, "[I]t's sad that we must engage with corporate forces to start a conversation about LGBT rights in Italy, but if the Italian political institutions do not respond to our demands for protection, what else would you suggest we do?"

Juris Lavrikovs, the communications manager Europe's International Lesbian, Gay, Bisexual, Trans & Intersex Association, praised the ad's simplicity, telling Time, "It's a positive step forward when different types of families are portrayed in ads, as they resonate with parts of society that are usually marginalized."

The best thing about Findu's commercial? It treats coming out as a perfectly normal, non-dramatic part of life. When Luca tells his mother about his relationship, she doesn't skip a beat. She's more surprised by the prospect of microwaveable pasta than her son's homosexuality, which is how it should be; being gay should never be a source of anguish. We can only hope that one day, coming out really will be as simple and painless (not to mention delicious) for everyone.