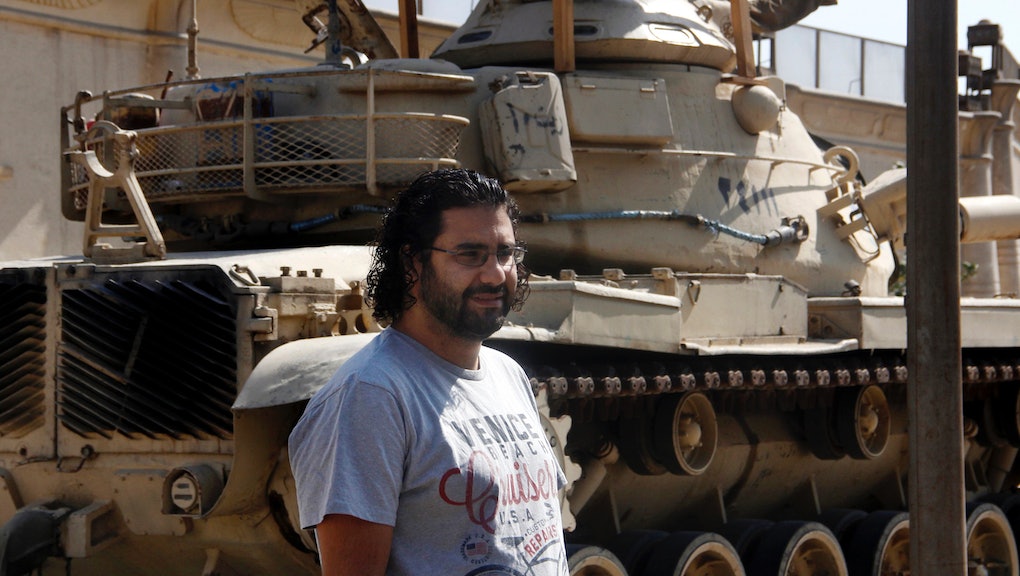 He's been a target of the Egyptian state, from Mubarak to Morsi to Sisi, and now he faces a 15-year prison sentence.

The 32-year-old activist Alaa Abdel-Fattah has been one of the most outspoken figures of Egypt's revolutionary movement, and he's now paying a steep price for daring to speak out against the country's brutal crackdown on dissent. Abdel-Fattah was today handed a hefty jail sentence for organizing a protest along with other activists.

Back in November, Egypt's government banned protests, showing yet another grim sign that the country is moving further and further away from fulfilling the hopes of the popular protests back in 2011 that toppled the regime of then-president Hosni Mubarak, who was in power for nearly 30 years.

Abdel-Fattah is one of the many Egyptians and activists risking arrest and jail time for speaking out against the country's corrupt court system and the lack of avenues for justice.

In an interview with Democracy Now in March, he said that "state institutions have lost any semblance doing their advertised function. What is the fuction of the criminal justice system? Most people in prison are there for very petty crimes."

Abdel-Fattah has also been charged with assaulting a police officer, and he was just released from prison in March after serving a four-month sentence. Before his arrest the blogger and social media activist turned to Twitter. "Anyway, may God be merciful," he wrote in reference to his court trial.

Today, the government's silencing of dissent is going down an even darker path.

The imprisoning of a key political activists like Abdel-Fattah represents an ongoing campaign by the military backed government to repress dissent and use excessive force to secure power. The trend continues with the recent election of President Abdel Fattah al-Sisi, a former military general.

The Sisi-led interim government has ruled Egypt since last summer, when Islamist president Mohamed Morsi was toppled, after a coup that came on the heels of popular protests against the democratically elected leader. Morsi was imprisoned, and the interim government subsequently carried out a crackdown on the Muslim Brotherhood, imprisoning more than 3,500 Muslim Brothers members, and killed 1,300 protesters. The government also handed out a mass death sentence to 683 members of the group.

The violence by the state has escalated to the highest degree in Egypt's history, according to Human Rights Watch. The organization reports the lack of impunity over security forces committing human rights abuses. The lack of impunity has also led to a rise in violent sexual assaults, the most recent occurring during celebrations for Sisi's inauguration in Tahrir Square.

The imprisonment of activists like Abdel Fattah and Mahienour al-Massry shows that the sort of dissent that drove the country's 2011 revolution is not welcome in Sisi's Egypt.