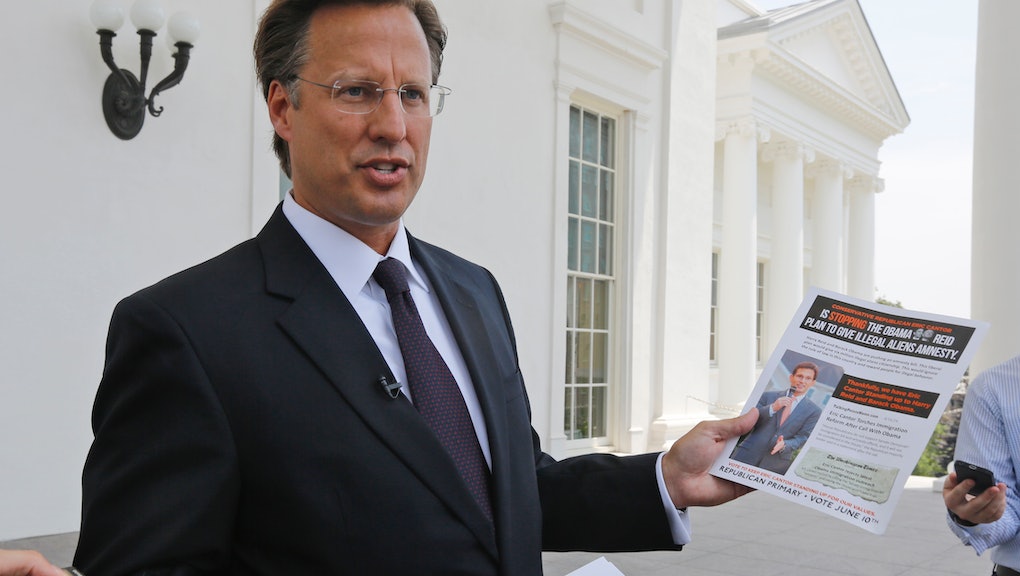 This might be the most unlikely political race of the year.

Republican David Brat, who beat out House Majority Leader Eric Cantor for the primary nomination, will face off against Democrat Jack Trammell for a congressional seat in Virginia. Both are professors at Randolph-Macon College, which might make the next faculty luncheon more than a little awkward.

Brat is the better-known of the two thanks to his upset victory. He was able to defeat the second-ranking House Republican despite spending less than 3% of what Cantor did. He's the first candidate ever to unseat a sitting House majority leader.

A tale of two professors: Brat teaches economics at Randolph-Macon and also serves as the director of the college's BB&T Moral Foundations of Capitalism program — controversial in academia due to its inclusion of Ayn Rand's ideas. (The program's funder, former BB&T Bank CEO John Allison, is a big Rand fan.)

Trammell teaches sociology and serves as the school's director of disability support services. He has worked on more than 21 books, mostly history and textbooks, though he's apparently planning a vampire novel.

Here's what his students say:

Here's what his students say:

Both professors are well-regarded by students on Rate My Professors, with Trammell holding a slight edge with a 4.3 out of 5 overall score. Both also receive the highly coveted (maybe?) chili pepper rating from students, meaning they're hot. One of Brat's reviewers calls him "total eye candy," while another gives him a mediocre score but says "atleast [sic] he's hot!!"

So who's going to win? Brat grabbed the nomination with a hardline immigration stance that painted Cantor as an Obama-appeasing softie. Trammell is reworking his platform, but seems to push for education reform and student loan relief.

As evidenced by Cantor's previous success, though, the district they're looking to represent is pretty red: Mitt Romney won it by 15 points in 2012. That leaves long odds for Trammell, even if registered voters in the district are more open to immigration reform than the Republican primary makes them seem.

But, as evinced by Tuesday's outcome, stranger things have happened in electoral politics. No matter who the loser is, at least he'll have that Rate My Professors chili pepper. It's more than Eric Cantor can say.