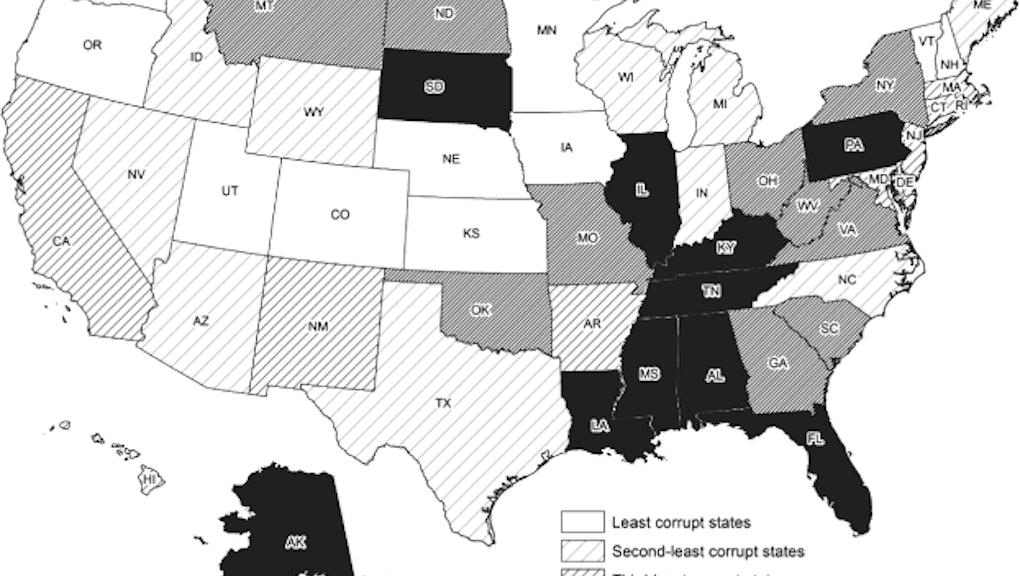 The 10 Most and 10 Least Corrupt States in America

The news: Corruption and government often go hand in hand. And in the United States, taxpayers are literally paying the price for that relationship — in the sum of tens of billions of dollars.

There is a strong correlation between elevated state spending and corruption in all but one of the states (South Dakota is the only exception).

"States with higher levels of corruption are likely to favor construction, salaries, borrowing, correction, and police protection at the expense of social sectors such as education, health and hospitals," the report said.

Key findings: The study looked at 25,000 convictions of violating federal anti-corruption laws between 1976 and 2008, and also generated a "corruption index" comparing convictions and the amount of government employees. After looking at the data, the researchers determined the top 10 most corrupt states are:

Not only do these states have excessive state spending, but they also spend more in areas of the government that are susceptible to corruption, like construction jobs, governmental employee wages and law enforcement.

Many of the corrupt states exhaust a lot of money on big infrastructure projects for which the money trail is not fully transparent to the public. Extortion, bribes and kickbacks may cause a rise in expenditures. These states also pay police and correction officers higher wages.

And areas which are not so easily corruptible — like public welfare, education and health — see much less state funding.

Based on the same method, the study found the 10 least corrupt states. They are

Those are choice words originally intended for the global ear, but apparently many of the United States should try and heed their advice as well. If they did, they would save American taxpayers billions of dollars.