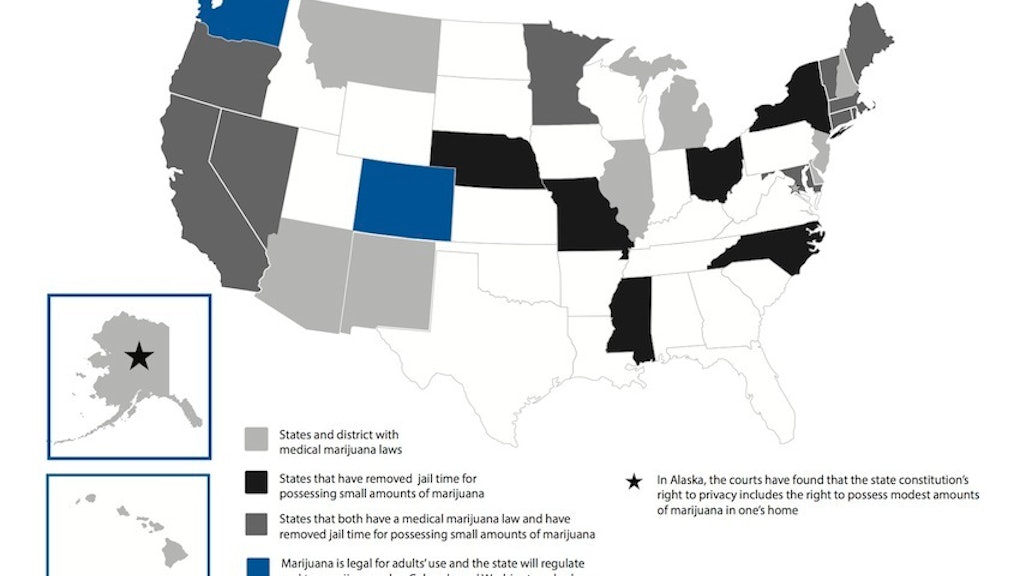 The news: As Colorado's legitimate pot economy continues to raise tax revenues and lower crime rates, states around the country are making strides toward various forms of marijuana legalization. But now a few unexpected states are following suit. Defying stereotypes, some of the most traditionally conservative states in the country are rethinking long-held prohibition laws and implementing narrow allowances for medical cannabis.

These states are specifically considering measures to legalize CBD oil, a cannabis extract, that has been found to greatly diminish or totally eliminate seizure episodes. Many lawmakers have been swayed by personal stories from their constituents.

Iowa Governor Terry Branstad, who recently signed a bill allowing CBD oil, told reporters, "The legislature and I were convinced by a lot of the families that have children that are epileptics and have these severe seizures that this is something that can help them."

Others, like Missouri Governor Jay Nixon, remain skeptical of marijuana legalization but want to make an exception for this particular case, stating, "I think our legislature might consider [CBD oils] ... I think to move beyond that at this point is a bridge too far."

Ironically, many of the states in the CBD oil discussion have the harshest marijuana laws in the country and have made little to no progress toward decriminalization and legalization.

CBD oil is an effective but rare treatment. For patients with refractory epilepsy — chronic seizures that don’t respond to pharmaceutical treatments — CBD oil is becoming an increasingly popular method of treatment. The first highly publicized case shedding light on this treatment was the development of Charlotte's Web, a cannabis strain high in CBD first used to treat a child with epilepsy named Charlotte Figi. Since her story came out, groups of parents from all over the country have emerged online to discuss methods of treatment and campaigns to legalize CBD oils in various states. Without extensive medical research on the topic, they rely on information from groups like Pediatric Cannabis Therapy, a network of more than 5,000 parents espousing the therapeutic effects cannabis has had on their ailing children.

On the website, the group's founder says, "I reached out to other parents in the [epilepsy] community who were also treating their children with cannabis, and the Pediatric Cannabis Therapy Facebook group was born. We started with six parents." Several such groups exist, and a recent Stanford University study compiled parents' findings in implementing these treatments. Many parents of children with refractory epilepsy who live in states without medical marijuana have sought treatments elsewhere, creating an ongoing exodus to Colorado. However, if the trend of states legalizing cannabis for seizure treatment continues, many more families won't have to make that trek.

Off to a good start: To this point, much of the evidence has been anecdotal. Even though there are studies highlighting the potential of cannabis to treat epilepsy dating as far back as 1949, it was largely overlooked until parents, desperate to try anything to help their children, began publicizing its effectiveness. But this rising awareness of this treatment has sparked some interest in researching the effects of CBD: The FDA recently granted Fast Track status to Epidiolex, a CBD medicine from GW Pharma. This should also facilitate efforts to study its effects on PTSD, anxiety and nerve disorders.

Many still maintain concerns that marijuana and all its extracts are drugs that negatively alter the mind, cause mania or hamper the normal development of young users. The American Academy of Neurology recently published a report stating that there is not enough evidence to conclude that the benefits of cannabis treatment for epilepsy outweigh the potential negative side effects.

But if CBD oil can help a few children without causing serious harm, even the staunchest opponent of cannabis will have a hard time dismissing this alternative treatment outright. Elected officials tend to be more affected by stories of personal struggle than by statistics, and in this case it's yielding a win for medical marijuana. As limited as these plans for medical marijuana might be, they directly address the most affecting cases for its legalization and shine a light on what some doctors believe could seriously help many patients.