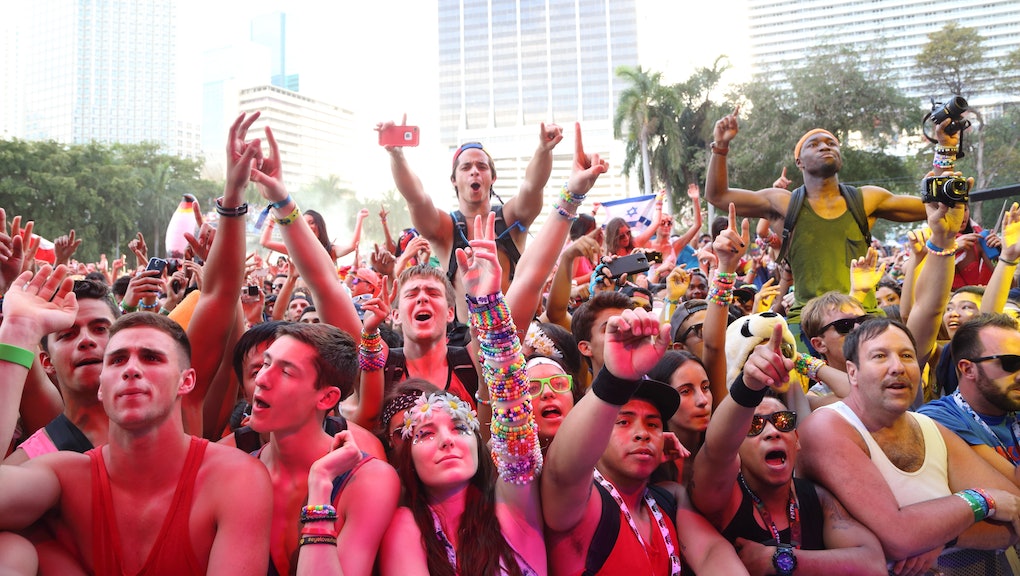 There are plenty of reasons to avoid music festivals in 2014.

From the $12 Bud Lights and vomiting 16-year-olds to sexual assault-ridden crowdsurfing and white people in Native headdresses, your range of deterrents is limitless.

But one stands head and shoulders above the rest: the price of admission.

It's remarkable how quickly the appeal of seeing Lady Gaga getting puked on diminishes in light of the holes burning in your pocket:

He writes that attendees "came by foot, car and rented-out school buses, and … sat in the sun and smoked weed while checking out a bill that included the Doors, the Byrds and Captain Beefheart. Tickets were $2."

Today, you can't find a decent toothbrush for that price, let alone see some of the most legendary acts in rock history.

Two years later, Woodstock organizers charged $18 for all three days of the iconic festival, which featured performances by Jimi Hendrix and Janis Joplin. That's $120 in 2014 money, but considering the lineup and how door prices dropped to "free" once more attendees showed up than expected, that might go down as the deal of the century.

But times have changed. Weekend passes to the 2014 Coachella Valley Music and Arts Festival — America's most profitable festival— asked a starting price of $375.

Lollapalooza and Bonnaroo clocked in at $234 and $250, respectively. Meanwhile, the "secondary market" costs for people who got edged out by stampeding ticket buyers are astronomical. Forbes reports that Coachella's average ticket price in this arena was a whopping $825, while festivals like Lolla and Bonnaroo make closer to a humble half thousand.

And of course there's the Ultra Music Festival, an EDM extravaganza where you pay $399.95 for people to whip their sweaty hair against your face and otherwise freak out in your general vicinity. "Next year, I won’t be going," former Ultra attendee Matthew Agramonte told the Miami Herald. "Ultra is isolating its fan base that simply can't afford outrageous prices. What was once a great experience is a ripoff and a great shame."

Concurrent with these hikes was an influx of corporate brands and advertisers, all chomping at the bit for exposure to the festivals' captive young consumers. Ad Age reports that brands will spend more than $1.34 billion sponsoring live music events this year, up 4.4% from 2013.

That means plenty more Heineken, Red Bull, Samsung and Sephora between you and the music. Hair washing stations by Garnier and "gaming tents" by Mattel are welcome to some but completely pointless to others who just came to check out the acts.

Such interlopers have become fixtures of the modern live music experience, so profitable, in fact, that corporate events are even popping up on their periphery:

"You can create your own environment," General Motors' David Barthmus told Ad Age, referencing an "off-Coachella" party co-sponsored by GM, McDonald’s and L.A. nightclub Bootsy Bellows. "Plus it's more cost efficient because there isn't the cost of being on the Coachella grounds."

Some attribute these skyrocketing prices to industry monopolization. Some say illegal downloading forces artists to tour and charge more. Others blame venue rental costs, while others still say artists are greedy and know they can charge whatever they want without consequence.

Whatever the case, today's festival-goers are suffering. It's absurd that the term "payment plan" now goes hand-in-hand with your ticket purchase, but that's the sad reality, and there's little you can do about it.

Affordable festivals do exist, though they seem to be disappearing by the day. And it's easy to romanticize the economic ethos of a bygone era while ignoring that challenges facing the music industry were markedly different then.

But the next time you drop $400 on a festival pass, think of the pulsating hordes of molly-popping frat bros and trust fund babies flailing in a sea of ads and $15 hot dogs while multi-millionaires kick back in their air-conditioned offices, counting your money and laughing at how easily you were duped. Then think about Woodstock, Magic Mountain and the salad days of a time far gone.

That's probably harsh, but so are these prices.