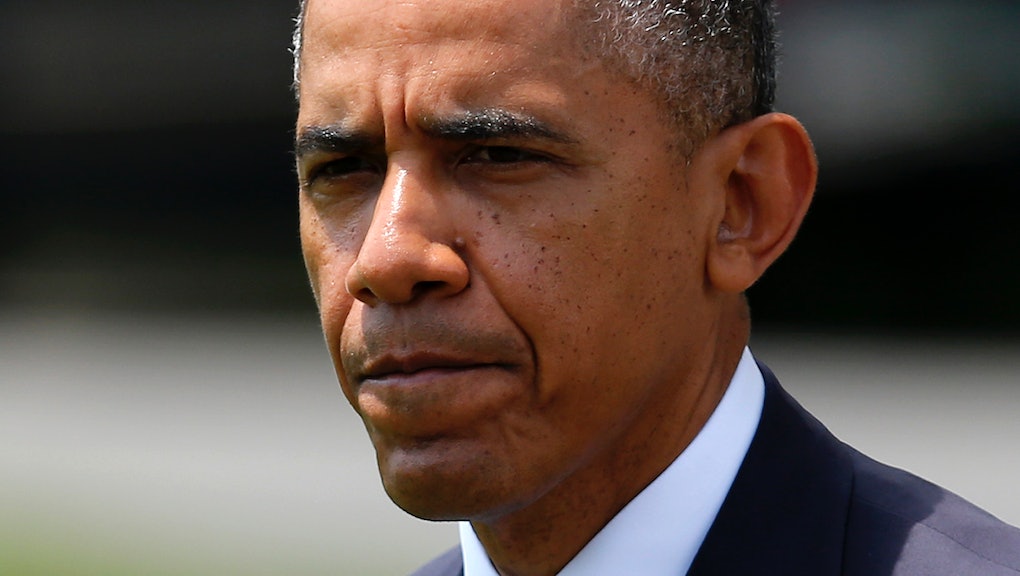 President Obama Just Called Out the Biggest Frustration of His Presidency

The news: This week, President Barack Obama's hour-long Q&A with the Tumblr CEO David Karp included a particularly stark segment on gun control. As Mother Jones notes, "He went off for nearly eight minutes" on how the biggest frustration of his presidency has been "the fact that this society has not been willing to take some basic steps to keep guns out of the hands of people who can do just unbelievable damage."

The full transcript can be found at Mother Jones here, but the video is below:

Some of the most relevant quotes:

"We're the only developed country on Earth where this happens. And it happens now once a week. And it's a one-day story. There's no place else like this."

"... Most members of Congress — and I have to say, to some degree, this is bipartisan — are terrified of the NRA. The combination of the NRA and gun manufacturers are very well financed and have the capacity to move votes in local elections and congressional elections. And so if you're running for office right now, that's where you feel the heat."

"A lot of people will say that, well, this is a mental-health problem, it's not a gun problem. The United States does not have a monopoly on crazy people. [Laughter.] It's not the only country that has psychosis. And yet, we kill each other in these mass shootings at rates that are exponentially higher than anyplace else. Well, what's the difference? The difference is, is that these guys can stack up a bunch of ammunition in their houses and that's sort of par for the course."

Well, is he right? Of course he is. The largest study ever performed on gun violence analyzed firearms homicide data from 50 states over the years 1981-2010, controlling for as many variables possible. The result was pretty unambiguous: A 1% increase in the proportion of household gun ownership translated to a 0.9% increase in the homicide rate. One standard deviation in firearms ownership increased gun murders by a staggering 12.9%. More gun owners meant more violence.

The U.S. leads all developed countries in both firearms ownership and homicide rates. Compared with other modern, industrialized nations, America looks like this:

And that's not even counting accidental gun discharges, which kill hundreds of children.

Moreover, the number of school shootings is indeed increasing. In 2012, Slate found that every decade that passes results in more deaths from guns in schools.

In spite of America's staggering problem with guns compared to other well-developed countries, Congress finds itself not only far from considering effective new gun regulations but actually largely sympathetic to loosening them. Some states have gone so far as to make the laws as loose as possible, like Georgia, where the state's "carry anywhere" law let people carry firearms into bars, churches and schools.

"... It seems like a lot of people aren't capable of responsible firearms ownership. Drivers who carry guns are 44% more likely than unarmed drivers to make obscene gestures at others and 77% more likely to follow other vehicles aggressively. Texans with concealed-carry permits were 4.8 times more likely to be sentenced for threatening someone with a gun than those who don't have one. 'Stand your ground' laws have been tied to 7-10% increases in homicides. More stringent controls on firearms could decrease the number of guns that get into the hands of murderers, criminals and the mentally ill."

Is the president right about gun lobbies? Yes. Republic Report breaks down how much more the gun lobby is paying than anti-gun groups, and it's kind of staggering. That the U.S. has so many guns and such loose firearms laws obviously has a lot to do with how out-matched gun safety groups are in the political battlefield.

There's little doubt that the gun manufacturing and ownership lobby has a huge upper hand in political spending, and that likely has much to do with America's incredibly disproportionate rate of firearm-related death and injury.

Or as the president says, "This is becoming the norm, and we take it for granted in ways that, as a parent, are terrifying to me ... right now, it's not even possible to get even the mildest restrictions through Congress, and we should be ashamed of that."