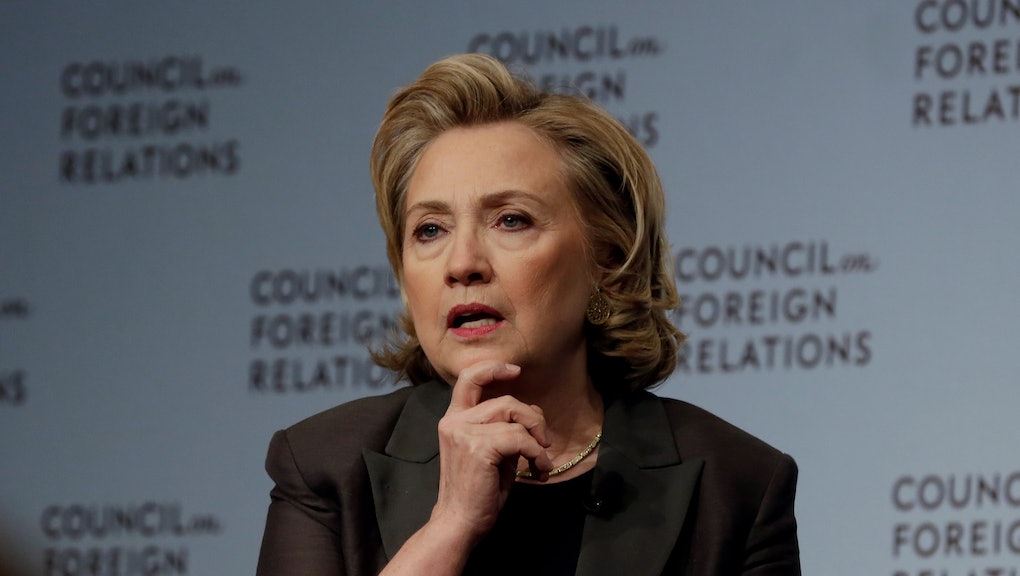 The quote: "I think we should advocate for the end of the embargo. We should advocate for normalizing relations and see what [Cuban officials] do," former Secretary of State Hillary Clinton told a crowd during an appearance in New York hosted by the Council on Foreign Relations.

This marks the first time that a potential presidential candidate from one of the two major parties has openly called for an end to the 40-year embargo. Clinton was reaffirming her stance, which she wrote about in her new book Hard Choices, that reflects a political shift away from the old paradigm.

In her book, Clinton wrote, "Since 1960, the United States had maintained an embargo against the island in hopes of squeezing Castro from power, but it only succeeded in giving him a foil to blame for Cuba's economic woes. It wasn't achieving its goals and it was holding back our broader agenda across Latin America."

Clinton has watched on as two other presidents have "made a move toward Cuba" but were deterred because the Castro brothers were not interested. "[The embargo is] their best friend," Clinton told NPR.

Clinton's statement represents a growing trend in the U.S. In a 2014 Atlantic Council poll, 56% favored normalizing the relationship with Cuba. Even 52% of Republicans got on board with the idea.

Two things could result from lifting the economic embargo. On the one hand, if Clinton's theory that the Castro brothers's hold on to the embargo as a crutch is true, then letting it go could actually propel the pro-democracy advocates in Cuba further. Not derail them as Sen. Marco Rubio (R-Fla.) implied.

"We're seeing the frightening lengths to which Secretary Clinton went to undermine Cuba's pro-democracy advocates by trying to help the Castro regime get its hands on more American dollars to carry out its repression," Rubio said in a prepared statement. "Just as astonishing is Secretary Clinton's assertion that the Cuban embargo has stood in the way of the U.S. advancing its broader agenda with Latin America."

And on the other hand, there are huge economic benefits for Cuba — a country that heavily relies on tourism and tourists' dollars. Cuba would have great potential to economically expand. The reaction of Cuban officials to lifting the embargo is not clear.

Some precendent here: In 2013, President Obama announced that he would lift some restrictions to allow Cuban-Americans to visit their families and/or send financial aid to family members, marking a more lax approach to Cuba. Obama actually first called for the end of the embargo in '04 while running for a U.S. Senate seat. But in '07 on the eve of his presidential nomination, Obama flip-flopped and supported the embargo.

Right now, Clinton's sharing her views as an author on a press tour and not a candidate in the 2016 presidential election. Time will tell if, or when, Clinton's views on Cuba "evolve" as she ramps up her presumed presidential run.