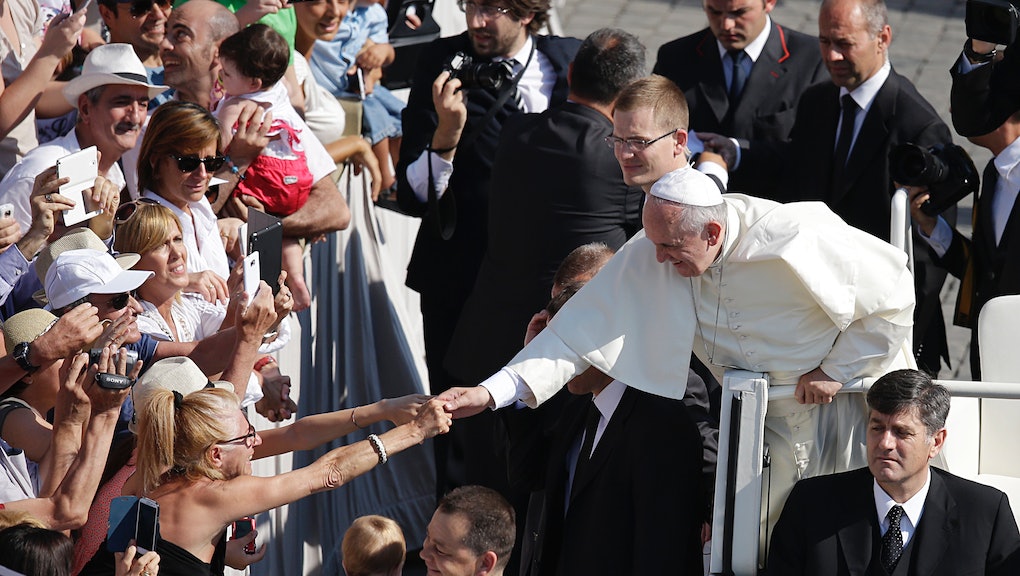 Pope Francis Just Did Something No World Leader Would Dare Do

The news: President Obama travels with sheets of bulletproof glass placed in front of him when speaking to mass crowds. Here he is in Berlin in 2013:

Pope Francis used to travel around in the Popemobile.

Not anymore. The pope told La Vanguardia that he will no longer be riding in the famous Popemobile since it's too confined and, besides, "at my age I do not have much to lose."

"I cannot greet the people and tell them I love them inside a sardine can, even if it is made of glass. For me it is a wall," Francis told La Vanguardia.

He realizes that there are security concerns associated with open-air travel, but said, "I know what could happen, but it is in God's hands." Instead, the pope wants to ride in open-top cars so he can be closer to people and greet them unfettered by an awkward glass box.

This new statement is just another in a growing list of ways that the pope is trading in archaic aspects of the papacy for more modern everyman, approachable methods. Here are some other examples:

He also traded in his car. The pontiff drives a donated vintage 1984 Renault 4 around the grounds of the Vatican. (His predecessor was often transported in luxury vehicles like a BMW X5 and a Mercedes.)

He chose to not live in the Apostolic Palace. Completely breaking from Vatican tradition, Francis lives instead in a suite of rooms in the residence, Casa Santa Maria. He wrote of his decision saying, "I'm visible to people and I lead a normal life — a public Mass in the morning, I eat in the refectory with everyone else, et cetera. All this is good for me and prevents me from being isolated."

He has waited in line and toted his own luggage to board a flight. In his first trip overseas, he loaded a commercial plane in the same way that every other passenger did.