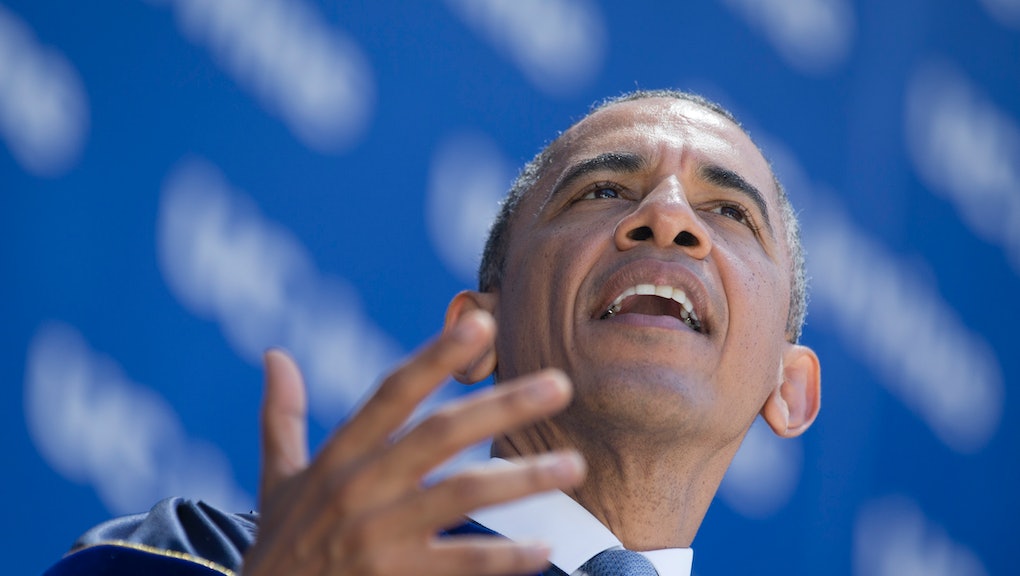 President Obama Has a Message for Republicans Who Deny Climate Change

The news: In sunny but drought-laden California, President Barack Obama called climate change a "fairly serious threat to everybody's future," on Saturday. The statement was calling out the members of Congress and critics who have relentlessly failed to recognize climate change's existence and its danger to the world.

"Today's Congress, though, is full of folks who stubbornly and automatically reject the scientific evidence about climate change," Obama told graduates from the University of California, Irvine in Anaheim. "They'll tell you it's a hoax, or a fad."

Many GOP members have said that they can't talk about climate change because they aren't scientists. But Obama wasn't satisfied with this logic, saying, "Let me translate. What that means is, 'I accept that manmade climate change is real, but if I admit it, I'll be run out of town by a radical fringe that thinks climate science is a liberal plot.'"

He added, "I'm not a scientist either, but we've got some good ones at NASA."

Obama's bold new stance: Obama proposed an EPA plan on June 9 to bypass Congress and force power plants to cut emissions by 30% over 15 years. The new climate change initiative — the largest undertaken by any president — will also push alternative forms of energy, including wind, solar and nuclear.

It will be the first ever carbon standards for many of the existing power plants in the U.S. that produce 39% of the total emissions. Between 2005 to 2012, emissions in the U.S. were down 10% because of a decline in overall energy consumption as well as a rise in natural gas usage. Previously, the nation was committed to cut emissions by 17% by 2020, but Obama's new plan has brought that number up to 25%.

Climate change is getting harder to deny. There are more wildfires, droughts, flooding and sea levels rising than ever before. A large collapse in Antarctica is unstoppable, meaning that sea levels will rise one meter, or about 40 inches, worldwide. And this could possibly trigger the collapse of the entire ice sheet in West Antarctica displacing millions of people around the world.

According to the National Climate Assessment, 2012 was the hottest year in the U.S. ever and the 2000s were the hottest decade yet. For Obama, these figures are proof that climate change is threatening the world as we know it.

In a New York Times interview last week, Obama said, "Science is science." He continued, "Look, it's frustrating when the science is in front of us. ... We can argue about how. But let's not argue about what's going on. The science is compelling. ... The baseline fact of climate change is not something we can afford to deny."