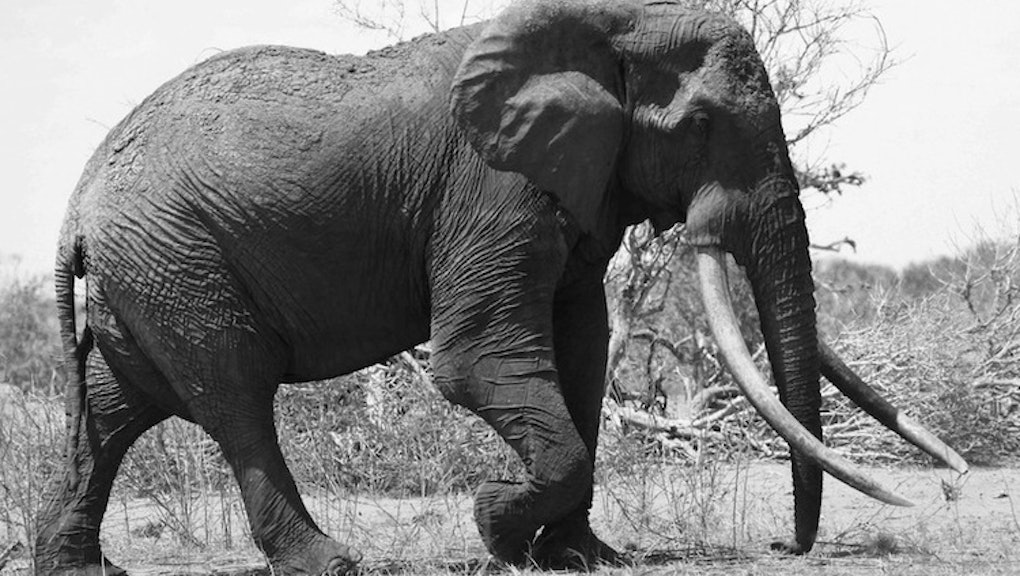 The news: A great elephant named Satao — a cultural icon and one of the last of its kind — was slaughtered by poachers earlier this month. According to Kenyan authorities, rangers at Tsavo National Park came across a giant carcass a few weeks earlier and were able to identify it as the famed elephant.

"Today it is with enormous regret that we confirm there is no doubt that Satao is dead, killed by an ivory poacher's poisoned arrow to feed the seemingly insatiable demand for ivory in far off countries," announced the Tsavo Trust, a conservation non-profit, on Friday. "A great life lost so that someone far away can have a trinket on their mantelpiece."

Satao was one of Africa's last "tuskers," identified by long tusks that almost reach the ground. Around 45 to 50 years old, the enormous elephant was a popular tourist attraction and had impressive tusks that weighed over 100 pounds. He had survived a similar poaching attempt in March and was recovering from poisoned arrows when he was attacked again. This time, he wasn't as lucky.

A continental problem: While Satao's death is a tragic loss for Kenya and for wildlife lovers, it's only the latest in a disturbing trend. Despite efforts to stem the ivory trade, countries throughout Africa are having trouble protecting their elephants.

Just last month, another tusker named Mountain Bull was killed in Mount Kenya with spears. And in the past two months, 68 elephants have died in Garamba National Park in the Democratic Republic of Congo — around 4% of the park's entire elephant population. A 2012 census found that Garamba only had 2,000 elephants left, down from 20,000 in the 1960s. "The situation is extremely serious," Garamba park manger Jean-Marc Froment said in a statement. "The park is under attack on all fronts."

Around 20,000 African elephants are officially estimated to have been killed in 2013 alone, though some conservationists believe that the number might be much higher. The illegal ivory trade has doubled worldwide since 2007, much of it taking place in Asia.

And it's not just elephants. Rhinos are also big victims of the ivory trade and they may be on the brink of extinction. Rhino poaching has exploded in the last few years. In 2007, 13 rhinos are estimated to have been killed by hunters; last year, that number was 1,004 — a 7,723% increase.

Around 1,600 rhinos have been killed in the last two years alone, with the rhino population dropping 90% since 2008. At the current rate of poaching, rhinos may be wiped off the planet in just six years.

Why is this happening? That staggering spike can be attributed to criminal organizations and militias in Africathat have mobilized to profit off the vast market for "blood ivory." The illegal wildlife trade generates as much as $19 billion a year, and rhino horn is an especially valuable commodity. According to a July report from the Congressional Research Service (CRS), a kilogram of ground rhino horn can go for as much as $20,000 to $30,000 — making it more valuable than gold, platinum or cocaine.

And these groups aren't your run-of-the-mill poachers. CRS reported that the organizations involved are "highly organized, mobile and well-financed criminal groups" that use "sophisticated tools to poach rhinos, including helicopters, night-vision goggles, tranquillizer darts and silenced heavy-caliber guns."

A report by the Elephant Action League indicates that illegal ivory trade is funding as much as 40% of al-Shabaab's operations. The Somali terrorist organization reportedly makes over $650,000 every month from blood ivory. Other groups, including al-Qaida and Lord's Resistance Army, are cashing in as well.

What can be done? Though South Africa and other countries are attempting to step up to protect their elephants and rhinos, they may be outgunned by these brutal criminal syndicates. About 1,000 park rangers reportedly died in the past decade defending the animals.

The U.K. announced last November that it will send 25 British troops to train Kenyan rangers, but that is far from enough. What these countries need is more manpower, money, surveillance and defense tools as well as international backing. As the profits of illegal poaching are increasingly funneled into international crime, it is more urgent than ever for other countries to step up and contribute.

And attention should not only be on the source of the crime, but also on its customers. Illegal rhino horns remain extremely popular in countries such as Vietnam and China, where ground ivory is used for traditional medicine. Though China has increased penalties on traders of poached goods, Vietnam has relatively lax rules (it has already hunted its own subspecies of the Javan rhino to extinction). Cutting off demand in these countries will encourage poachers to hunt less and that requires international coordination and cooperation. With more urgency and political backing, deaths like Satao's may be prevented in the future.