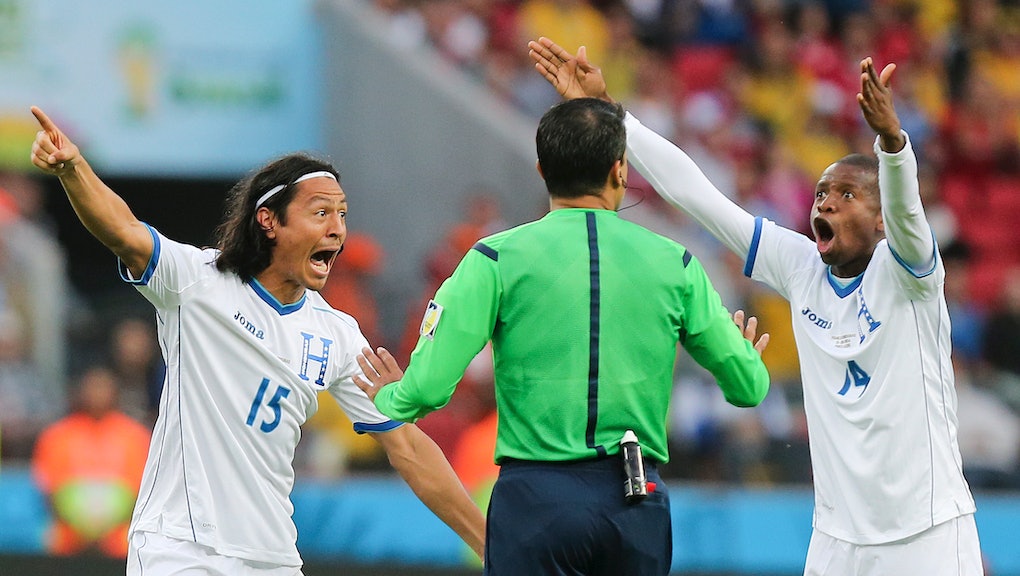 Why It's Time to Bring Instant Replay to the World Cup

When goal-line technology made its World Cup debut on Thursday, it was deservedly greeted with a touch of sarcasm. After all, did viewers really need to be shown that Brazilian defender Marcelo's own goal — the first goal of the tournament — had crossed the line?

"I think we knew [it was a goal] when it hit the back of the net, didn't we?" ESPN commentator Ian Darke laughed, as a fancy graphic appeared on the screen to show exactly where the ball had crossed the goal line. "I think so," his co-commentator Steve McManaman responded. "I think when there was silence in the stadium, we knew."

On Sunday, though, this technology undoubtedly proved its worth when the replay system showed conclusively that French forward Karim Benzema's strike had hit the post and crossed the line by inches before the Honduran goalkeeper gathered up the ball.

That moment had been years in the making, with the turning point dating to June 27, 2010. That day a strike from England's Frank Lampard against Germany in the World Cup's Round of 16 had somehow not been called a goal.

"UR a useless referee," the British tabloid the Sun screamed the next day at the Uruguayan referee responsible for the gaffe.

Prior to this World Cup, just about the only technology FIFA had embraced on the field was the electronic board the fourth official uses to display substitutions and the duration of stoppage time. But the outcry from the Lampard error was loud and sustained and, for once, FIFA acted upon it, adding the replay system to all 12 Brazilian stadiums ahead of the 2014 World Cup.

With goal-line technology and the magically disappearing free-kick spray being welcome additions to the game, is this the last World Cup that does not make use of a replay system? It should be. And if the words of FIFA president Sepp Blatter come true, it might be.

Already such a replay system, one that would be limited to penalty decisions and contentious offside calls, would have been useful. Most notably, Croatia was called for a phantom foul in the box against Brazil, while Mexico had two goals wrongly disallowed in its game against Cameroon.

Soccer is a sport that relies on the ebb and flow of the game, making a lengthy visit to a replay booth (a la the NFL's system) impossible to condone. But offside calls can be made seconds after the play has occurred. A small panel of independent officials could alert the referee if the sideline official had made the incorrect call in the time that it takes for a player to retie his shoes. Debatable calls should be allowed to stand, as this system should only be used to root out the bone-headed decisions that too often mar World Cup matches.

It takes time for sports leagues and fans to embrace replay systems. The NFL discontinued its replay system in 1992, only to bring it back in 1999. But critics of the NFL's system have largely gone away, as they have in regards to college football's, the NBA's, the NHL's and pro tennis' systems. (The jury's still out on MLB's just-introduced process.)

FIFA is notoriously slow to take action on just about anything. Yes, the penalty call in the Croatia game was bad, but will we still be talking about it next year, or even next month? That's doubtful. Let's hope it doesn't take an atrocious offside decision in one of the knockout games to spur FIFA into action. But even if it does take a mistake so bad that it spoils an important contest, in the long run such a blunder would be for the good of the game.

Just don't try to tell that to the fans of whichever team gets robbed in the process.