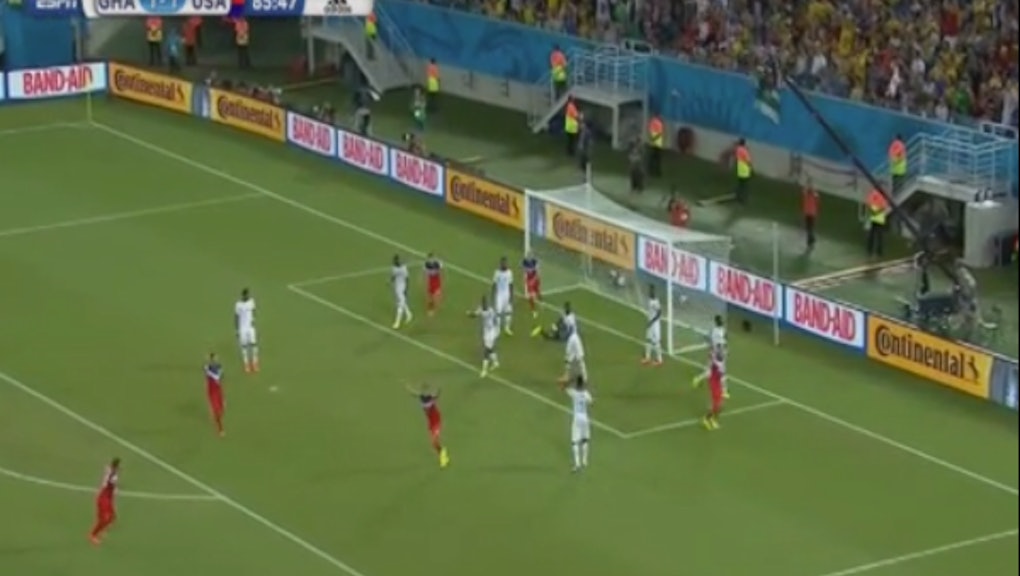 This Was the Dream Goal That Decided the USA-Ghana Thriller

The USA had led 1-0 since the the first minute of then game. Then Ghana scored in the 82nd minute, a screaming equalizer by Andre Ayew that looked like it would throw a wrench in the plans of Team USA's plan to get out of the brutal Group of Death.

America had been denied a chance to exact revenge against one of it's biggest World Cup rivals ...

Then, 4 minutes later, this happened:

John Brooks, off a corner, crushed a header into the back of the neat, giving Team USA the deciding score of the match. It was the first-ever goal by an American substitute at a World Cup.

The game had captivated an American audience traditionally uninterested in soccer. Across the nations, crowds packed into bars, parks, and viewing areas to follow the opening game of Team USA.

The Americans are slotted in Group G — the so called "Group of Death" — with soccer powerhouses Germany and Portugal. For the USA to even have a shot of making it deeper into the tournament, a win against Ghana was a must. They next take on Portugal on Sunday, followed by a deciding match against Germany four days later.

American fans weren't disappointed. Clint Dempsey had started the game off with a dream goal, scored just 29 seconds into the game. The 31-year-old striker received a beautifully threaded pass from Jermaine Jones on the edge of the box, dribbled past two defenders and slotted a left-footed shot past Ghanaian goalkeeper Adam Kwarasey into the bottom-right corner of the goal. Dempsey's goal was the fifth-fastest goal in World Cup history.

No one was more excited about the quick tally than U.S. national team coach Jurgen Klinsmann.