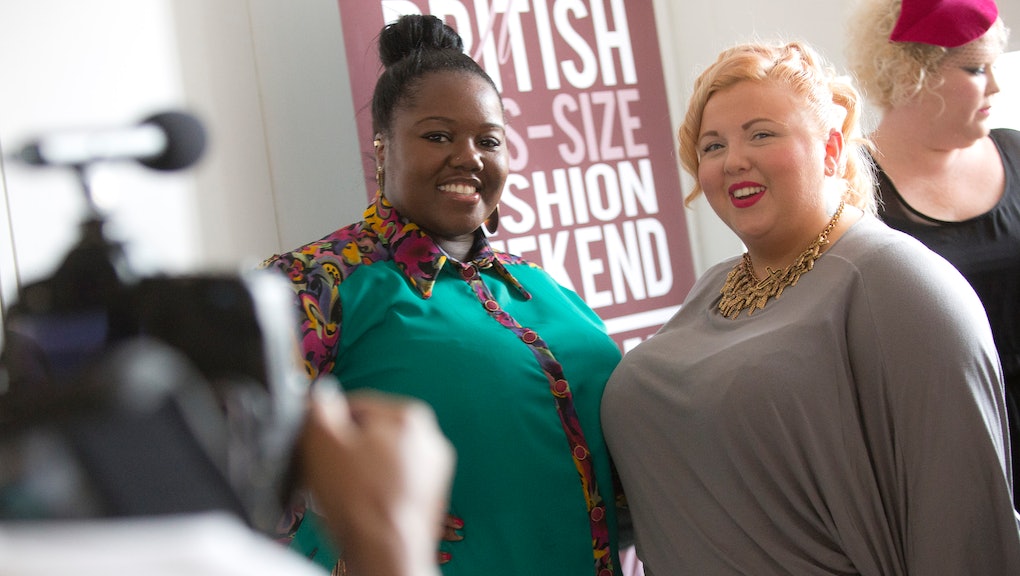 9 Facts Shatter the Biggest Stereotypes About People Who Are Fat

At the bottom of nearly every article celebrating body diversity, you will likely find some version of the following comments:

"Aren't you promoting an unhealthy lifestyle?"

"I'm all about confidence, but this is just unhealthy."

"I have no sympathy for these people, they bring it on themselves."

"Think of the children!"

This is called concern trolling, and it needs to stop. The intersectional issues of size, health and weight loss are far more complicated than we've been led to believe, and this lack of understanding has led to weight-based discrimination becoming a serious problem across the world. Widespread anti-fat prejudice typically stems from misconceptions about health, weight and body positivity, and negatively affects millions of people every day.

People are allowed to make their own decisions regarding their own bodies, but we need to start treating people of all sizes with respect. We can start by providing some actual information about being fat.

"Muscle weighs more than fat." It's the adage of body-builders everywhere, and, though technically we should say muscle is denser than fat, its message bears repeating: Muscle mass can have a big impact on weight.

And yet, body mass index calculations don't distinguish between fat and muscle, nor do they take into account things like a person's frame size. They do, however, draw arbitrarily sharp divisions between what's considered normal, overweight and obese, even though individuals with a lot of lean muscle and little fat could fall into any of these categories. (On the flip side, those with a low BMI may have very little muscle and a high percentage of body fat, despite landing in the "healthy" range.)

Contrary to popular opinion, BMI is not an indicator of fitness. Its inventor, 19th century Belgian mathematician Adolphe Quetelet, intended his formula to be used to assess the status of general populations so the government could better allocate resources — not to calculate how much excess fat individuals have.

Nevertheless, many doctors and medical insurers continue to rely on BMI (deemed by NPR a "200-year-old numerical hack developed by a mathematician who was not even an expert in what little was known about the human body back then") as an authoritative marker of health. While perhaps useful as a broad strokes guide to determining where someone's body falls in relation to others' of similar height, it's important to remember that the picture BMI paints isn't nearly complete.

2. Fat people don't all have poor eating and exercise habits.

The world is full of people with less-than-ideal eating habits, and, yes, some of them may be heavier than others. But it's important to remember that plenty of them aren't. Fatness does not automatically signify that a person is a compulsive overeater, nor exercise-averse.

It's entirely possible for a naturally thin person to be a couch potato and for a heavier person to run five miles a day and have a soft spot for kale, because all bodies look different (which is pretty cool, by the way), and because the relationship between health and weight is complex. Factors like age, genetics, underlying conditions and dieting history all contribute to that number we see on the scale, and you can never tell exactly what someone's eating and exercise habits are just by looking at them.

What's more, making an assumption about someone's diet — whether it's that a fat person eats poorly or that a skinny person doesn't eat at all — can be triggering for those who actually do have issues with food. That's not helping anyone.

One's relationship to food shouldn't reflect on who they are as a human being, and destroying someone's self-esteem in the name of "health" is never going to work (see No. 6).

If being fat were inherently bad for us, then weight loss should bring about innumerable health benefits. But that's not always the case: Multiple studies have seen little to no connection between weight loss and decreased risk of mortality.

In fact, some studies have found that fat people are more likely to survive cardiac events and that being overweight can have a positive influence on longevity. What's more, losing significant weight is very difficult, and intense yo-yo dieting can cause plenty of health problems, too. The conversation about weight-related health risks also frequently ignores the problems that thin or underweight people may face as well.

Extremes on either end of the scale carry risks, and no one doubts that eating a balanced diet and getting regular exercise are good things. On its own, however, weight is not the issue. Too much junk food combined with a sedentary lifestyle is, and it's going to be regardless of one's weight.

4. Being fat doesn't signify a lack of willpower.

Even if being fat were actually a major health crisis, research shows that most diets just don't work in the long run — debunking the myth that being fat is simply due to being lazy.

The rise in the number of people considered overweight cannot be written off as an individual lack of conviction. Indeed, International Journal of Obesity editor Richard L. Atkinson wrote in 2005 that the belief that "obesity is simply the result of a lack of willpower and an inability to discipline eating habits is no longer defensible."

As neuroscientist Sandra Aamodt points out in her recent TedTalk, individuals have unique weight "set points." Losing weight outside of this range is really, really hard, and to chalk up the failure to do so to willpower is both disrespectful and ignorant. To put it in perspective, 95-98% of dieters regain any weight lost, and sometimes more, within three years. This makes sense: UCLA's A. Janet Tomiyama told the university that if "dieting worked, it wouldn't be a $60 billion-dollar industry," and that our genes' power over our weight "is about the same" as their power over our height.

The truth is that we still don't know exactly how to healthfully lose weight and keep it off. As Paul F. Campos writes in the LA Times, "[T]he human body is a vastly more complex mechanism than a car engine, and the simple logic behind the idea that people will lose weight by eating less and exercising more isn't simple as much as it's hopelessly simplistic."

According to the National Association to Advance Fat Acceptance, sizeism is the fourth-most prevalent form of discrimination in the U.S. Yet only six cities (plus Michigan) have laws protecting against it.

While stereotypes exist regarding all different body types — short, skinny, tall and so forth — those reserved for larger body sizes are particularly vicious. Fatness is often associated with laziness, poor hygiene and stupidity, assumptions that can have serious consequences on both a personal and societal level.

In the working world, fat employees receive fewer promotions and may earn less than their thinner counterparts. In the classroom, fat students are less likely to be accepted to college, despite comparable academic performance, and often face lower expectations from teachers. Fat people even have to deal with negative biases in court (male jurors have been shown to be quicker to label fat women "repeat offenders" with "awareness of [their] crimes"), and at the doctor's office, which can affect the quality of treatment they receive.

Perhaps the worst manifestation of size discrimination comes in the form of bullying: One study found that obese kids were 65% more likely to be bullied than their peers.

In the words of NBC News health and diet editor Madelyn Fernstrom, "It's almost like obesity is the last of the acceptable groups to be teasing."

Fat shaming, though cruel, is another form of bullying that often goes unchecked because people believe that it will spur others to lose weight, and, as the logic typically goes, become healthier. This is misguided first and foremost because there's nothing inherently wrong with being fat (see No. 3). And even if there were, fat shaming doesn't help people lose weight.

According to researchers, those who experience weight discrimination are more likely to become or remain obese. Even simply calling someone "fat" can have this effect: A recent long-term study out of UCLA found that young girls who were called fat by someone close to them at age 10 were more likely to be obese later in life.

This isn't all that surprising. As study co-author Jeffrey Hunger noted, "Being labeled as too fat may lead people to worry about personally experiencing the stigma and discrimination faced by overweight individuals," an experience that in turn "increases stress and can lead to overeating."

Rebecca Puhl, deputy director of the Rudd Center for Food Policy and Obesity at Yale University, echoed this sentiment in an interview with NBC News regarding a previous study that had reached a similar conclusion: "Stigma and discrimination are really stressors. ... And we know that eating is a common reaction to stress and anxiety."

7. Fat people are not desperate for dates.

Fat people lead fulfilling romantic lives like anyone else. Being a certain size in no way robs someone of their right to be loved and respected by a partner, end of story.

8. Not everyone wants to be skinny.

In March, Mindy Kaling proudly told Vogue, "I'm always trying to lose 15 pounds. But I never need to be skinny. I don't want to be skinny. I'm constantly in a state of self-improvement, but I don't beat myself up over it."

She's not alone. Beauty is subjective, and while being skinny can be beautiful, being beautiful doesn't have to mean being skinny.

Part of the problem is that the media offers an exceedingly narrow slice of what people actually look like, and the bodies we see on screen directly influence our perception of bodies in the real world. But people come in all shapes and sizes, and no one should have to devote every spare moment trying to turning their body into something it's not meant to be in order to feel attractive. With more visible images of real, meaningful diversity, perhaps people will better recognize that there's more than one way to be beautiful.

Fat shaming clearly isn't helpful, but this isn't a call to ban the word itself from our vocabulary. Fat should be treated as an adjective like any other.

In practice, unfortunately, "fat" can sting. And it will continue to do so, as long as society insists on making fatness the butt of jokes and perpetuating the myth that it's an eminently undesirable state of being.

Don't let this happen. Part of challenging assumptions about being fat means no longer thinking of this word as a pejorative; fat shouldn't be an insult, because there's nothing wrong with being fat.

Because we have yet to eliminate the stigma around the word entirely, people should, of course, refer to themselves using whatever term makes them comfortable. But one day, perhaps saying someone is "fat" will be no different than saying they have blond hair or brown eyes.