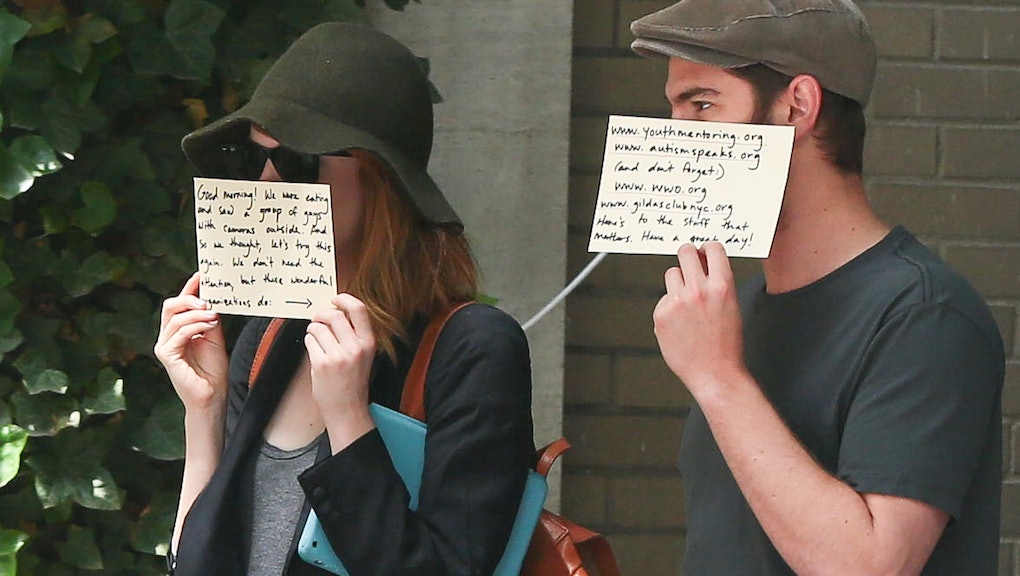 In the original Spider-Man comic, Peter Parker realizes that "with great power there must also come — great responsibility!"

When the two (who are also a couple) were confronted by photographers after eating at a Manhattan restaurant on Tuesday, they held up signs featuring nonprofit organizations in front of their faces, in order to redirect the focus away from themselves and back towards the things that really matter.

Paparazzi scrutiny can be intense and is unlikely to ebb in our celebrity-obsessed culture, but Stone and Garfield are channeling that unwanted attention in one of the only positive ways possible.

The signs may look unfriendly from afar, but they're actually pretty heartwarming.

Good morning! We were eating and saw a group of guys with cameras outside. And so we thought, let's try this again. We don't need the attention, but these wonderful organizations do: -->

Garfield's continues (we've added in hyperlinks, in case you'd like to check them out!):

Here's to the stuff that matters. Have a great day!

Both Stone and Garfield are actively involved in social causes, and this isn't the first time they've used this tactic to one-up the paparazzi. In September 2012, the couple held similar signs mentioning Gilda's Club NYC, which offers social and emotional support for those living with cancer, and the Worldwide Orphans Foundation. Stone is an ambassador for the former, as is Garfield for the latter.

Stone has been particularly outspoken against sexism as well, once lamenting the media's double standards for actors and actresses in an interview with Teen Vogue. And back in April, the actress once again stole many a feminist heart when she called out Garfield's slightly sexist comments about femininity during a Q&A for The Amazing Spider-Man 2. The subsequent conversation became a good-natured teachable moment about the perils of everyday sexism, and left everyone a little bit wiser.

The organizations mentioned appear to be very happy about the publicity, and it's great to see celebrities using their platform to bring awareness to issues that are far more important than what they ate for lunch.