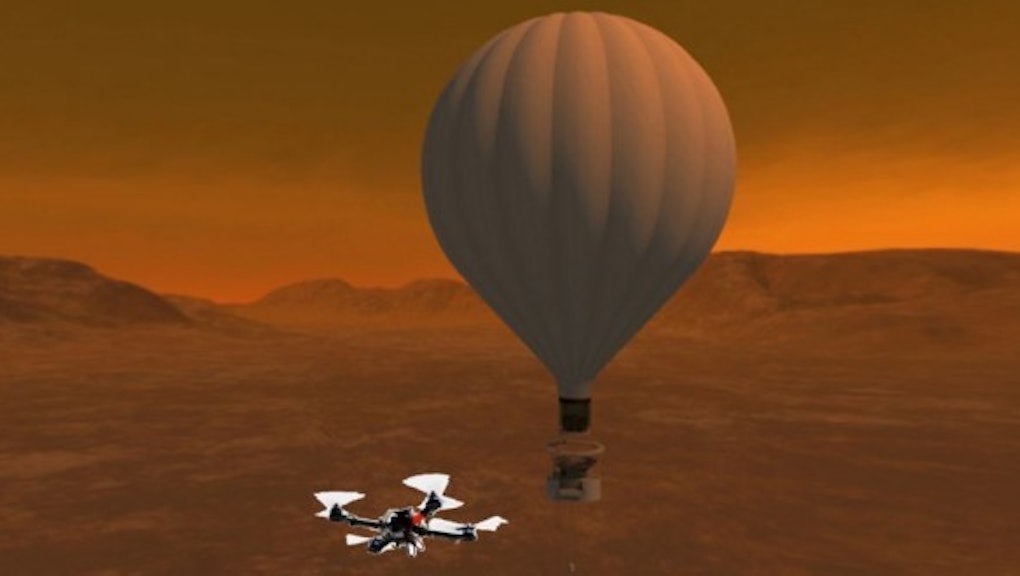 The Ingenious Way NASA Wants to Explore One of Jupiter's Moons

The news: Aerial drones could be coming to a moon near us soon. NASA may use a quadcopter to explore the surface of Saturn's largest moon, Titan, according to a new interview at Science Recorder with NASA Jet Propulsion Laboratory senior researcher Larry Matthies.

Titan is widely speculated to have chemical processes that are "prebiotic," which are similar to those that existed on a pre-life planet Earth. Scientists also believe that its icy shell masks a massive ocean of liquid water which could, in theory, be the nearest possible reservoir of life off our own planet.

While researchers at various space agencies and companies are working to figure out how to pierce the icy crust (which may be over 12 miles thick in places), NASA's potential quadcopter would likely be under 22 pounds and around 27.5 inches in diameter, nowhere near the scale needed to undertake such an operation.

The background: "Previous research specifically for Titan looked at either much larger aircraft, which don't fit the cost target we're shooting for, or small aircraft that had significantly less capability, in that they couldn't acquire samples or recharge their battery to fly multiple sorties," Matthies told Science Recorder. "One of the top priorities for Titan science is to do chemical analysis of surface material, which requires getting down to the surface. Since Titan is diverse, it's also very desirable to do that in a variety of places. Other approaches cannot currently achieve all of these objectives in an affordable fashion; our approach looks like a promising way to make this affordable."

Because Titan's atmosphere is denser than Earth's and its gravity far lower, a quadcopter would be the ideal vehicle to explore Titan's surface.

Realistically, the technology would take around 10 to 15 years to get a workable prototype, and another 10 years to prepare the drone for Titan's environment. The final model would likely be a daughtercraft launched off of another vessel, such as a balloon lowered into the moon's 98.4%-nitrogen atmosphere or a rover dropped onto its surface. In theory, the length of the mission would be limited only by how long the parent vehicle could keep charging the quadcopter and the life of their components. Geek.com's Matthew Humphries writes that compared to the difficulty of the Mars Curiosity rover landing, a quadcopter mission would be a "walk in the park."

Why are we going? Aside from its prebiotic chemistry, Titan is potentially the most Earth-like solar body that isn't Earth. Its thick atmosphere creates surface features similar to those found on Earth, including liquid lakes and flowing seas (even if they're made of methane), as well as dunes, deltas and canyons. Like Earth, it even has seasonal weather patterns and goes through a complete methane cycle similar to our water cycle. And it is "rich in complex organic chemistry, with a possible subsurface liquid ocean serving as a biotic environment." Titan is a long way off, but we may learn that it's a lot more like home than we ever thought.