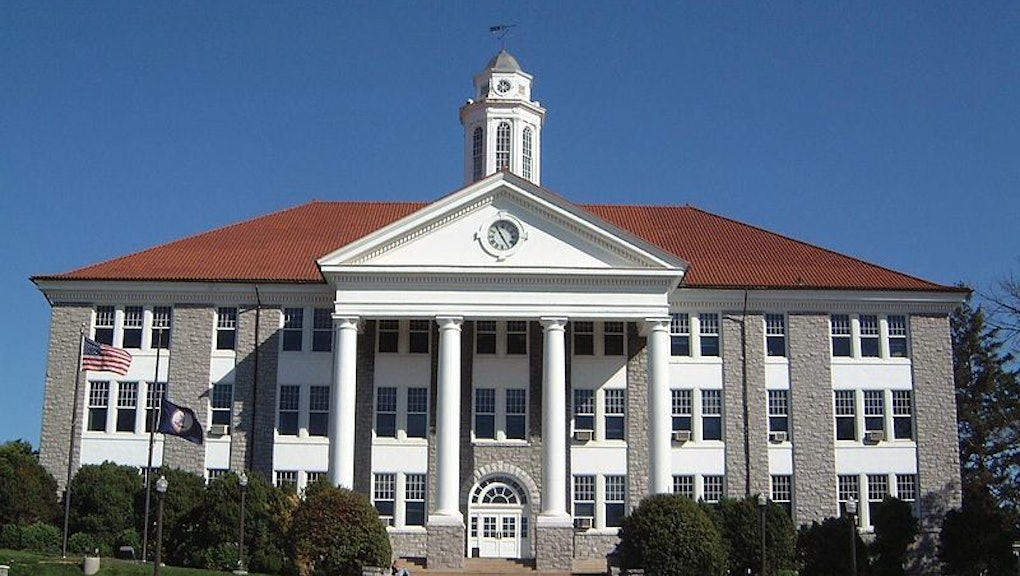 At One of America's Top Universities, Sexual Assault Perpetrators Graduate and Victims Drop Out

The last thing Sarah Butters remembers from the day she was sexually assaulted was going to a gathering of around a dozen classmates from James Madison University. It was held at an aquaintance's condo in Panama City, Fla.

Butters, a sophomore at JMU at the time of the incident in March 2013, was part of a group of friends that had traveled to Panama City. for Spring Break. But what started as a chance to unwind by the beach turned nightmarish when Butters started to hear rumors about what had allegedly transpired at the condo that night.

Although Butters struggled to remember the evening, the events had apparently been recorded in more permanent form: on a student's video phone.

"Once we got back from spring break and got to JMU, [the video] started spreading around more and more people were finding out about it," Butters told local television station WHSV. "People were contacting me about it. I had multiple guys texting me saying, 'I just saw this video of you, it's awful, it's pretty bad."

Although Butters confronted the boys and they at first denied the existence of the incriminating tape, her friends told her otherwise. In heartbreaking text messages shared with the Huffington Post as well as school officials, Butters' distress is evident as more and more people come forward, alerting her to the footage's existence.

"I know a lot of people have it but it's none of my business so I deleted and told the one person I sent it to to delete it as well," one person texted. "[I]t literally looks like a rape video like I wouldn't be surprised if they got jumped for it," another one said.

Eventually, Butters got her hands on the footage — which shows a topless Butters being groped by multiple men who laugh and attempt to take off her bathing suit bottoms — herself.

"I needed to see it for myself because I was just having a really hard time believing that my friends could do something like that to me," she told WHSV. "I watched the video and I was disgusted. It was just really humiliating that so many people had seen that."

Unfortunately for the young woman, her ordeal was far from over.

Armed with the video footage, Butters filed a complaint with JMU's Office of Judicial Affairs. Eventually, after months of appeals, the officials notified Butters that her three attackers were indeed guilty of sexual assault and harassment. Their punishment? Two would be expelled — but not until after graduation, a punishment that is as nonsensical as it is relatively meaningless. The third would remain on campus for his senior year.

Lisa Maatz, vice president of government relations at the American Association of University Women, told the Huffington Post that she was deeply troubled by the punishment.

"When this type of outcome happens, it seems like the school has dismissed the survivor's very real trauma and negated her courage in coming forward," Maatz said.

Located in Harrisonburg, Va., a few hours from Washington, D.C., JMU hosts a total undergraduate enrollment of close to 20,000 students on its 700-acre campus in the Shenandoah Valley. But despite it's relatively large student body, for Butters, the possibility of potentially running into one of her attackers on campus was just too much.

"What is a girl going to think that I had video proof and I still have to see these boys on campus?" Butters told the Huffington Post. "How would she ever feel comfortable coming forward?"

Feeling frustrated and with her grades were slipping, Butters filed a complaint with the Education Department on April 30. Two months later, and perhaps not surprisingly, it was announced that the school had been added to the now 62 institions currently under investigation by the federal government for their handling of Title IX complaints related to sexual violence.

"James Madison University takes very seriously any allegation of sexual assault and is committed to providing a safe and inclusive environment for every member of the JMU community," a JMU statement provided to the Washington Post said.

It is a statement that seems to stand in stark contrast to the experience of Butters, however, who has since decided to drop out of JMU after falling grades resulted in the loss of her financial aid package.

Cases like Butters' are exactly why the media and the public must continue the discussion regarding sexual assault on America's campuses. It seems that each day brings fresh outrage. But that's precisely the point. The news is oversaturated with these stories because American culture is still oversaturated with these examples. So while it may not be fun, enjoyable or even comfortable to be confronted by these cases day in and day out, they must be written about, they must be talked about, until the chorus of frustration becomes so overwhelming those in power have no choice but to act.