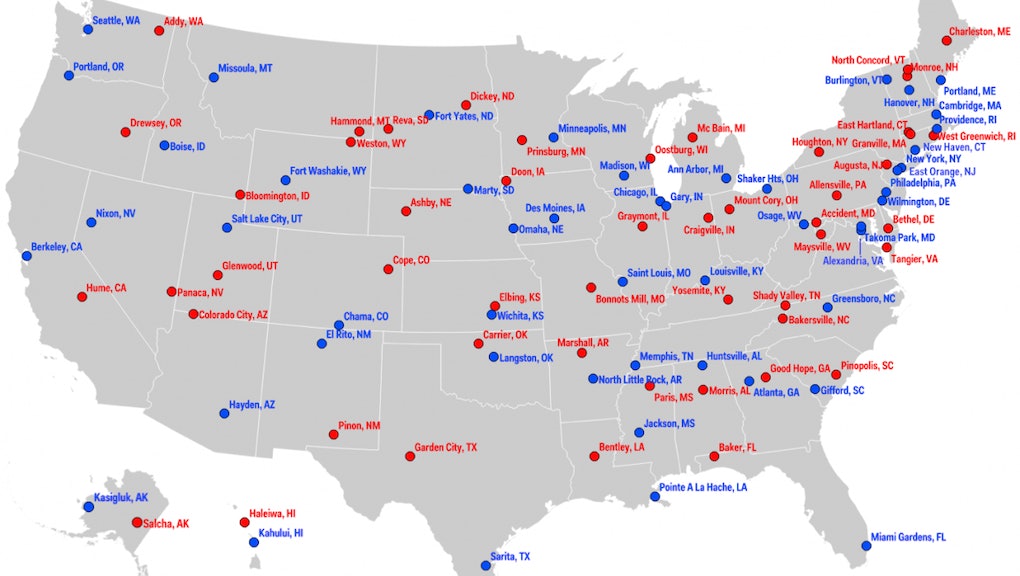 The Most Liberal and Conservative Cities in Each State, Mapped

The news: Business Insider compiled data by Clarity Campaign Labs and mapped the most conservative and most liberal cities in each state. Where do you fall on the list?

The methodology: These results are pulled from an online tool that allows people to find the city in their state that aligns with their political beliefs.

The results are pulled from Clarity's national models and SmartVAN Co-Op voter file, so they're pretty much as accurate as you're going to get and filtered right down to the zip code (having used similar tools before, I can tell you their system is capable of highlighting the specific addresses of everyone included). Their data set is composed of responses to the following seven statements. A "yes" answer on any of them except for religion indicated a liberal leaning:

- I identify with the Democrats more so than the Republicans.

- Abortion should be legal and accessible to all women.

- Climate change is an immediate concern that must be addressed.

- There should be more restrictions on purchasing and carrying guns.

- The government should reduce the deficit primarily by raising taxes rather than cutting services.

The statements regarding religious services and rural/urban preferences were not included in this data set, presumably to make sure the results were based entirely off political beliefs. You can try Clarity Campaign's tool here; I managed to get a section of New York just a 10-minute walk from where I live, but your results may considerably vary.

The map isn't exactly full of surprises — big cities tend to be liberal, and smaller, rural towns more conservative — but it's a good illustration that while left- and right-wingers might be more concentrated in certain regions of the country, huge pockets of both can be found pretty much anywhere. Case in point: Certain parts of Atlanta, deep in GOP territory, are 91% Democrat, according to Clarity's database. So a "real America" uniformly composed of one party or the other doesn't really exist.

For more fun: This is the same company that compiled lists of partisan leanings by name, which you can check out here (apparently, Hitlers are Democrats). Does either map match your preconceived notions of the local political scene? Let us know in the comments below.