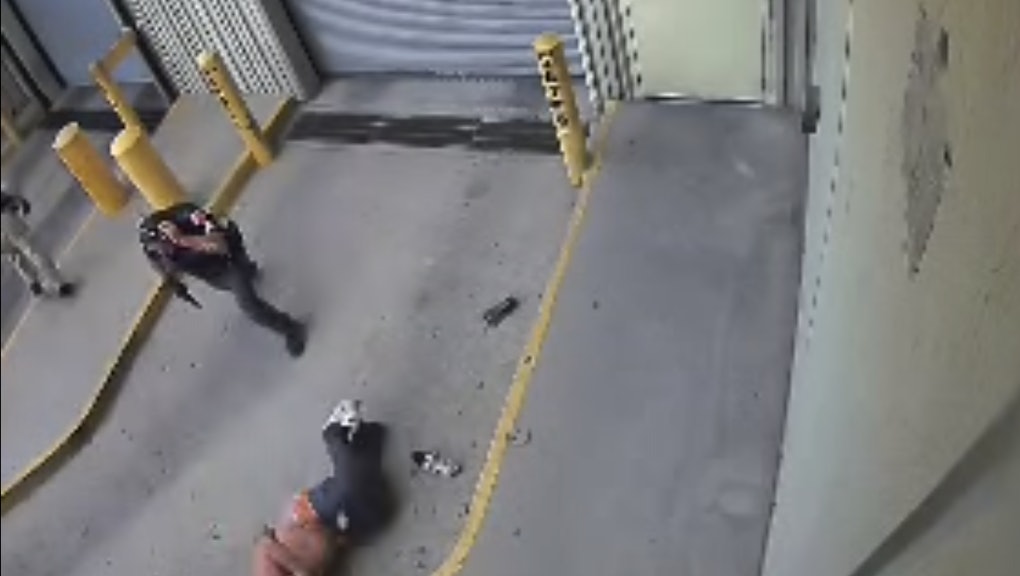 The news: This shocking video shows El Paso, Texas, police officer Jose Flores shooting Daniel Saenz, a 37-year-old bodybuilder, while the man was in police custody, handcuffed and within the security perimeter of a city jail. For resisting arrest, Saenz lost his life.

The bullet entered Saenz through his left shoulder, piercing his heart. El Paso police claimed it was an accident and that Saenz presented a lethal threat, capable of reversing his handcuffs and using them as a lethal weapon a la No Country For Old Men. But the graphic video released by a Texas court, which you can see below, is pretty clear. The relevant sequence, clearly showing the pistol shot that killed Saenz, begins around 18:00.

Saenz was brought into police custody after erratic behavior at a local grocery store led to him being taken to Del Sol Medical Center. There, he allegedly attacked an off-duty policeman and members of staff. No one questions that Saenz's behavior warranted intervention, and it seems clear that he was mentally unwell.

Yet despite video footage demonstrating that rash actions by Officer Flores led to the senseless death of a man in custody, he was never indicted, though the New York Daily News reports that it's unclear whether he is still on duty.

The video also makes apparent that there were options available to the personnel handling Saenz to resolve the situation without recourse to lethal force. It's not clear why Officer Flores didn't resort to a taser or call in additional personnel from inside the jail, or why he drew his gun and fired at a prone suspect just inches away from a prison guard, putting both in senseless danger. As Mediaite's Deborah Hastings writes, "In an effort to protect this obviously disturbed man from causing himself, or anyone else, any further harm, Flores made the decision to shoot him to death while he was handcuffed."

Texas authorities concluded Flores was not in error to do so. The Department of Justice says that lethal force is only justified when suspects pose an imminent threat of death or severe bodily harm to officers or bystanders.

This looks very much like an extrajudicial execution. But the media is hardly covering it, and where it has, the coverage is lackluster. A video report on CNN simply took Flores' lawyer at his word, failing to question the circumstances under which the officer decided to take Saenz's life.

The background: El Paso police are quick to portray Saenz's death as a tragic and unavoidable situation gone wrong, an isolated incident that doesn't reflect on the department's work. But the department's record of excessive force has raised questions for more than a decade. In 2004, the New York Times reported that dismissals for misconduct from the police department were rare, despite 1,830 accusations of excessive force out of about 36,000 arrests from 1999 to 2004. That means the department's officers were formally accused of using unnecessary force for about 1 out of every 20 arrests, yet just five officers were fired out of a force of 1,100. The New York Times said that special courts had intervened to determine whether the D.A.'s office was improperly shielding local police from prosecution.

Why you should care: Nationwide, excessive force and a culture of police impunity present a very grave problem. In 2011, the Department of Justice was conducting 17 systemic excessive force investigations into local police departments simultaneously, more than any time in the agency's history. It's not just a problem in big cities like New York, where the department has been experiencing some very ugly problems with officer conduct of late. An estimated 84% of people who had contact with police and experienced the use of force or were subject to the threat of force thought the authorities were acting improperly.

Another high-profile shooting in the Southwest started mass protests earlier this year in Albuquerque, N.M., after a heavily armed police team shot a mentally ill homeless man to death. A subsequent autopsy found that the bullet that killed him entered him in the back.

Turning a blind eye to police misconduct is not only horrible, it's dangerous to society in an age when law enforcement is gaining access to billions of dollars in surplus high-end military equipment and weaponry designed for war in Iraq and Afghanistan. SWAT teams are now deployed tens of thousands of times a year, even for what used to be routine police tasks, like liquor inspections and license checks. If America doesn't get a handle on this problem soon, average citizens will increasingly find themselves at the business end of a lot of guns, and with little recourse when they're used recklessly.