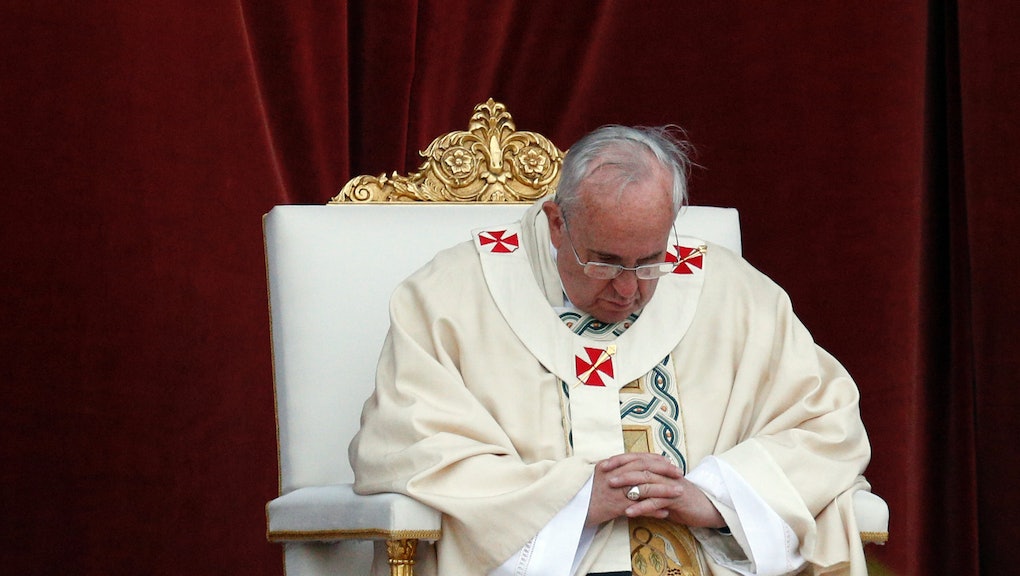 The news: The only smoke Pope Francis is fond of comes from the chimney of the Sistine Chapel.

The pope spoke out against the legalization of marijuana and other recreational drugs on Friday during the International Drug Enforcement Conference in Rome. "Drug addiction is an evil, and with evil there can be no yielding or compromise," he said, adding that legalization efforts "are not only highly questionable from a legislative standpoint, but they fail to produce the desired effects."

The comments come after Uruguay — neighbor to Francis' home country of Argentina — passed a law that not only legalized marijuana but nationalized it, putting in place a plan for the government to grow marijuana, harvest it and sell it in local pharmacies.

Meanwhile in America: Pope Francis' warning likely won't have much of an impact in the U.S., where the march toward full legalization continues. Twenty-two states have legalized medical marijuana, with Florida and New York set to be the 23rd and 24th. Two states, Colorado and Washington, have legalized it for recreational use as well.

We've had positive results in those states, though whether or not the pope is wrong certainly depends on your definition of "the desired effects." Colorado is expecting more than $1 billion in marijuana sales in the coming fiscal year, which means $134 million in revenue for the state.

Internationally, a CNN poll from earlier this year found that 55% of respondents want think marijuana should be legal. That's up from 16% back in 1987.

The "cool pope": Pope Francis has garnered praise (and earned a spot on magazine covers) for his populist leanings and seemingly more progressive policies. He has pushed for the world to address income inequality, chastised big banks and famously said, "Who am to judge?" when it comes to homosexuality.

But, as easy as it might be to forget given all the above: Dude's still the pope. The chances of Pope Francis, or any pope, coming out in favor of marijuana are pretty unlikely at this point. Give it some time though — especially with public opinion on the topic changing throughout the world — and we might see Francis or a successor singing a different tune.