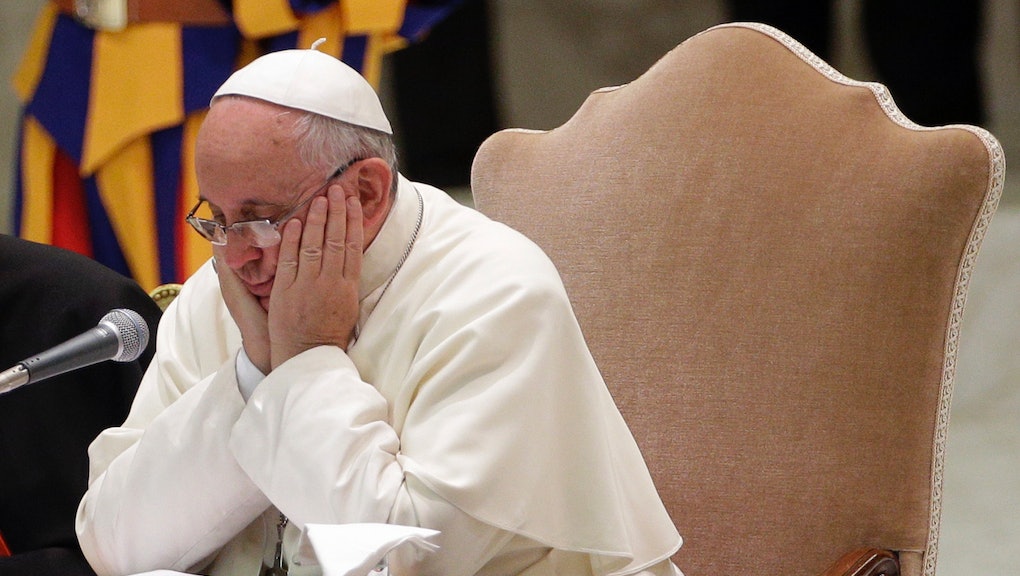 The news: Since Pope Francis' papacy began last year, His Holiness hasn't been shy about his distaste for large banks, income inequality, the trickle-down system and the basic tenets of capitalism. But now, he's tackling the financial industry head-on by asking investors and banks do do some soul-searching.

At a Vatican conference on ethical investments on Monday, the pope urged investors to put their money where their mouth is by choosing responsible lenders that focus on social good instead of profits. "It is important that ethics once again play its due part in the world of finance and that markets serve the interests of peoples and the common good of humanity," Francis told the crowd.

"It is increasingly intolerable that financial markets are shaping the destiny of peoples rather than serving their needs, or that the few derive immense wealth from financial speculation while the many are deeply burdened by the consequences," he added.

Why is the pope saying this now? Francis' pronouncements are not far from what he's said previously, but now he's taking a particularly active approach to promote ethical investing, and for good reason.

His comments come at the heels of a global increase in food prices, which many have attributed to financial market speculation. According to the United Nations Food and Agriculture World Food Price Index, food prices jumped up 2.6% in February and 2.5% in March before easing in April and May, interrupting a 17-month decline.

Living up to his moniker as "the people's pope," Francis said he was concerned about how these financial tactics would impact the weakest and most vulnerable. "Speculation on food prices is a scandal which seriously compromises access to food on the part of the poorest members of our human family," the pope said during the two-day symposium.

The financial sector could seriously use some ethics. While speculation is certainly a big concern, the pope's words also apply to all manner of criminal wrongdoing that have come out of the financial markets since the recession. At least eight banks — including Citigroup, Royal Bank of Scotland, Credit Suisse AG and Goldman Sachs Group Inc. — are still under investigation by U.S. attorneys for their involvement in the subprime mortgage crisis.

A healthy dose of self-awareness might also do some good. While the CEO of Goldman Sachs might be publicly decrying income inequality, his company still appears to be guilty of misleading the public on its securities. Some soul-searching could be good for him — and the rest of the financial sector as well.