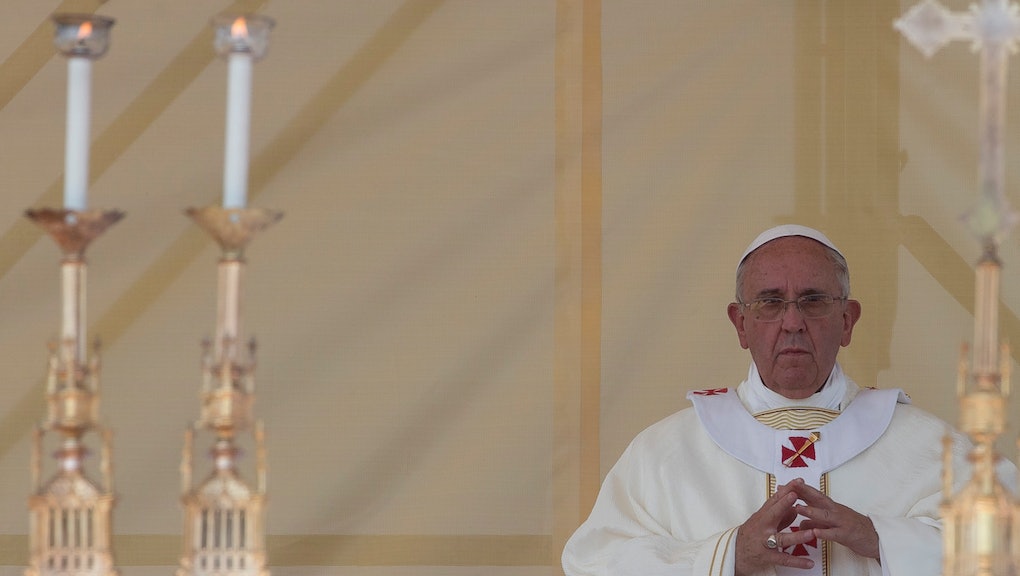 Excommunication: In front of a crowd of 100,000 people, Pope Francis sent a strong message to Italy's ever-present mob members on Saturday: If you belong to organized crime, the Catholic Church wants nothing to do with you.

"Those who in their lives follow this path of evil, as mafiosi do, are not in communion with God. They are excommunicated," Pope Francis said at a Mass in Calabria, Italy.

He fingered the local crime group, the 'Ndrangheta and called their actions an, "adoration of evil and contempt of the common good."

The Church will no longer condone members who commit criminal acts that distance themselves from God. So Church sacraments or other activities are off limits for any person part of a crime syndicate.

What brought on Pope Francis' comments? Particularly, the death of a 3-year-old boy. The boy was allegedly shot and burned in a car during a mob-related attack back in January after his parents were sent to jail on drug charges. The family is believed to have been associated with the 'Ndrangheta drug clan.

During the Saturday Mass, Pope Francis condemned violence against children, saying, "May a child never again have to suffer like this."

Who are these people? The Italian Mafia dates back to the 1500s. Currently, there are five prominent organizations, Camorra of Naples, Cosa Nostra of Sicily, 'Ndrangheta of Calabria, and Stidda and Sacra Corona Unita of Puglia.

Over the past two decades, the 'Ndrangheta have become one of the most powerful and dangerous crime syndicates. "It is believed that drug trafficking, extortion and money-laundering activities of the organization equate to least 3 percent of Italy's GDP," reports RT.

They were once tied to the Sicilian Mafia, but now operate independently. Annual revenue for the group is an estimated $72 billion, half of which comes from drug trafficking across 30 countries. Reportedly, the 10,000-member group is responsible for 80% of the cocaine trade in Europe.

'Ndrangheta members elude law enforcement because, unlike Soprano-style hierarchy, this group has a lateral structure and is less flashy than its counterpart, the Sicilian mob. And they maintain credibility with the locals by attending church services and sacraments, giving the allusion that they are pious people.

Should the Pope be worried for his safety? Possibly. Pope Francis' anti-mafia crusade potentially makes him a target for reciprocal actions from mafia members. Especially since one his predecessors came under fire in 1993 for his choice words.

At the time, Pope John Paul said that "one day [members of Sicily's Mafia would] face the justice of God." Months later, mafioso responded with bomb attacks on several different churches in Rome.

Despite the fact that this is the first time Pope Francis has verbally excommunicated the Mafia, it is actually not a full-on excommunication, which is a formal legal process. In any case though, it is a public attack on a very menacing group. The gloves are off and Pope Francis has nothing left to lose.