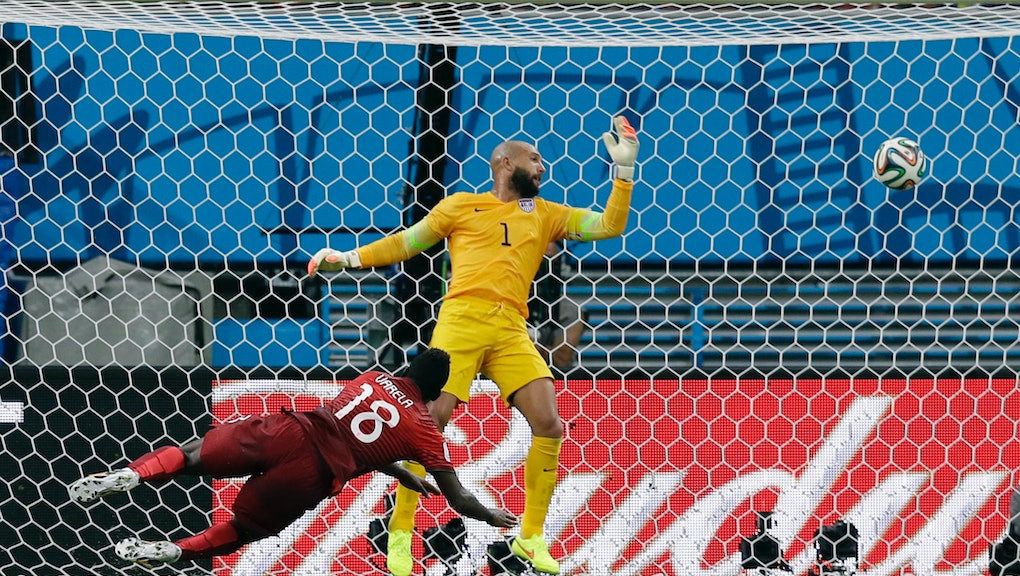 How the U.S. Fought Back — And Let It All Slip Away — Against Portugal

The United States' rollercoaster World Cup run continued Sunday with a 2-2 draw with Portugal. Americans were elated when Clint Dempsey scored an apparent late winner, but then crushed when an even-later equalizer kept the Yanks from advancing to the knockout stage. Here's a look at some of the tactical decisions by U.S. coach Jürgen Klinsmann that came into play during a match that left us feeling disappointed about what might — what should — have been.

A conservative start ... but not for long.

The game started much the way the Ghana game finished. The U.S. came out in a 4-3-2-1 formation and seemed content to sit in.

Dempsey was the lone target, while Michael Bradley and Jermaine Jones playing underneath were tentatively pushing forward, giving Portugal run of the midfield early. Kyle Beckerman, Alejandro Bedoya and Graham Zusi camped out in front of the back four until another early goal — aided by a botched clearance by Geoff Cameron — changed the course of the game for the better.

Down 1-0 after five minutes, the Americans woke up and played their best soccer of the tournament. The midfield, especially Jones, Bedoya, and Zusi, ventured forward and were able to maintain possession in the attacking half for solid stretches of the first half — all of which would have been for naught if not for the post and an amazingly athletic save by Tim Howard in the 44th minute.

Questions abounded at the break over whether we would see a substitution made before the second half. Klinsmann withheld initially and was rewarded by his team. In the 55th minute, Zusi found an overlapping Fabian Johnson driving down to the end line, who passed back across the box to a wide-open Bradley, whose one-time effort was saved off the line by Ricardo Costa.

The Americans' confidence was evident as they continued to commit more numbers in the attack. Both Johnson and DaMarcus Beasley began getting forward and involved offensively, while stepping up higher defensively to pressure the Portuguese midfielders in their defensive half.

Beckerman continued to play well in his holding midfielder role, sitting in front of the back four as the formation morphed into a 4-1-4-1. The persistent pressure paid off as Jermaine Jones pounced on a poor clearance, took a touch and fired a wonder strike into the side netting from about 25 yards.

The score was level and the U.S. was not content with holding for the tie. Nani and Cristiano Ronaldo were not willing defenders out wide and the U.S. was able to create several opportunities coming down both flanks. DeAndre Yedlin was brought in off the bench in the 71st minute and continued the trend. He ran onto a through ball starting the combination that led to Zusi's pass to Dempsey's goal for the 2-1 lead — a moment that had Americans everywhere believing the knockout stage was within touching distance.

Those same fans surely cringed as the U.S. slipped into complacency after five minutes of injury time were announced. Clearing balls, holding balls in the corner and hoping to hear the final whistle seeing them through to the next round, the U.S. allowed Portugal a few more opportunities — one of which made all the difference. Ronaldo was not ready for his World Cup to end and his picture-perfect cross — the last meaningful kick of the game — bent into the path of Silvestre Varela, whose header beat Howard at the far post to end the game in a 2-2 tie.

If you asked an American fan entering Sunday's game if they'd have been happy with a tie, I believe the answers would have been mixed. After going down a goal within five minutes — given the U.S. team's all-time record of 0-16-4 in World Cup games when conceding the first goal — every American would have answered with a resounding yes.

But the U.S. led 2-1 with under 10 minutes left. The ability to close out games separates the good from the great. On the final goal, every player on the field could have done something different to change the outcome starting with Yedlin down in the corner and then Bradley, whose giveaway in the final minute directly led to the equalizer.

Beasley could have closed Ronaldo quicker and the other three backs were all beat at the back bar losing track of Varela.

But it didn’t happen.

Instead the U.S. team must wait until Thursday for a second and final chance to advance out of the group stage. Fortunately, many of the scenarios are in their favor. Until then, Americans can embrace how far we've come as a soccer nation when getting a point from Portugal in the World Cup is disappointing.