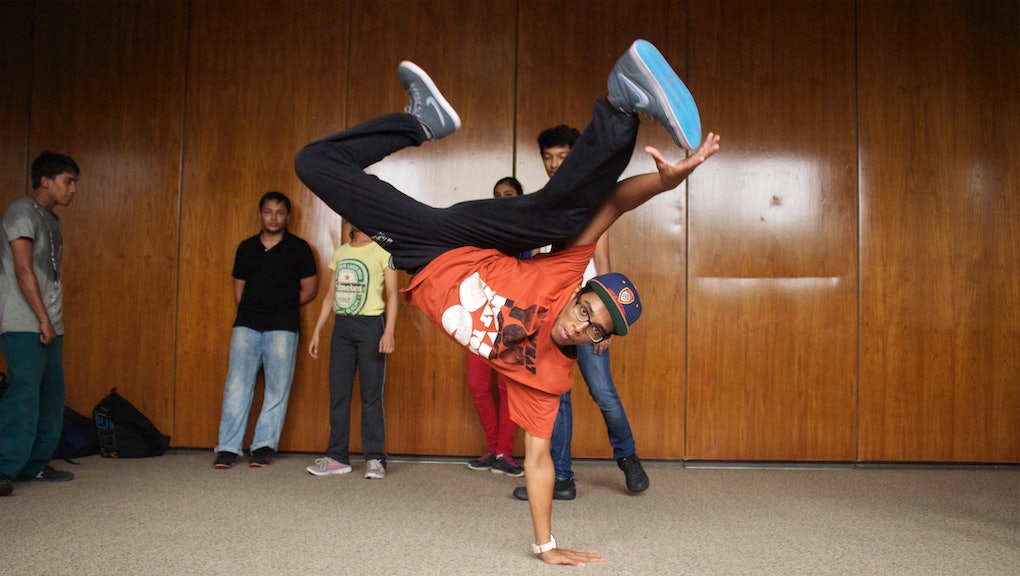 Other countries' approval of U.S. leadership has been steadily dropping since 2009. It kind of makes sense. Our detractors hear enough about America's questionable foreign policy to substantiate their disapproval. They hear about drone strikes hitting wedding parties, our wildly irresponsible spying programs and our occupations and interventions. But they likely don't hear as much about what American lives are actually like. That's where our music comes in.

For half a century now, America's best diplomatic tool has been its music. In the '60s, the State Department funded the Jazz Ambassadors, a program that sent artists Dizzy Gillespie and Louis Armstrong to play a series of concerts in Soviet Bloc and Third World nations to promote the "American way of life" and steer people away from communism. "We look at how we can collaborate and cooperate to address issues of shared concern ... and find ways to bridge the gaps between what's different and find what's common. And traditionally, culture provides that means just about better than anything," a representative from the State Department told Mic.

The legacy of those trips lives today on in an unexpected way. Embassies overseas still want American musicians to come for diplomatic reasons. But these days they're not asking for jazz — they're asking for hip-hop.

DJ 2-Tone Jones and Ko (Beatmaker) jamming at the Princeton Club in Kolkata, India. The concert was put on by Jamsteady and the U.S. Consulate General in Kolkata. Image Credit: Next Level

That's why the State Department created the Next Level program in conjunction with the University of North Carolina's music department. Next Level puts on two-week hip-hop workshops around the world that seek to teach the craft of hip-hop so young people the world over can learn to express themselves and, in the process, see the best of American culture. The program's director and principal investigator, professor Mark Katz, explained: "We're working with young people who are just everyday kids who are going to school, trying to work jobs and just exist. We're trying to work with them on whatever issues those happen to be."

Hip-hop has always helped people who are struggling find themselves and their way. By teaching classes in all the vital hip-hop skills — beatmaking, MCing, b-boying and b-girling (breakdancing) and DJing — Next Level is bringing that same opportunity to countries like India, Serbia and Zimbabwe.

Next Level's DJ professor, DJ 2-Tone Jones, talked to Mic about the poverty he witnessed in Patna, India: "You take away the geographical location, they're no different from teenagers in the '80s and the '90s in the ground zeros [where] hip-hop was born. They're living in harsh conditions. I can't even imagine what women are going through over there. [Hip-hop] is their escape and way to rebel against the system and the powers that be."

The turntables, mics and beat-making software that Next Level leaves behind provide those kids from underserved areas with a voice. Hip-hop helps them deal with the stress of living in poverty and turn their struggles and aspirations into art to empower their communities which, in turn, will hopefully provide others the strength to persevere, as it has done for so many of those marginalized here in the U.S.

Hip-hop isn't only a tool for self-improvement — it's also the site of a bigger cultural war that Next Level indirectly addresses. In certain areas overseas, hip-hop is a powerful manifestation of anti-American feeling. "Jihad rap," as it's often called in periodicals, is a particularly potent new form that uses hip-hop to spread extremist doctrine. That's partially because, even in America, Islam has had a strong presence in hip-hop culture, ever since Afrika Bambaataa founded the Zulu Nation in the 1970s. That collective's manifesto shares many ideological foundations with the Nation of Islam. But while the ideals of the Zulu Nation were "Love, Unity and Having Fun," some Islamic hip-hop of today is more akin to Abu Mansoor al-Amriki's "Make Jihad with Me." That's why a 2008 government-sponsored 2008 Brookings Institution report recommended the government make "greater exploitation of this natural connector to the Muslim world."

Next Level is indirectly promoting positive representations of hip-hop around markets where listeners might hear exactly the opposite. That's never explicitly their mission, but it helps that they focus so heavily on conflict resolution. In a class in Kolkata, India, the Next Level teachers used hip-hop to discuss gender conflict — a hot-button issue in India right now, considering the horrific incidents of rapes and torture that have been making international headlines. During a cypher in the MC workshops, Katz saw that the men were dominating while the women hung back.

"We used that as a way to talk about this. 'What is going on here?' 'Why is this happening?' 'Should this be happening?' and they didn't realize it was happening," Katz said. "So just using the model of the cypher, where equality is supposed to rule in that as long as you have talent you can participate, we used that as way to address gender conflict and gender relations." Hip-hop, once again, was a force for equality.

Next Level is only an example of what Americans artists do every day when their music reaches overseas. We're all always ambassadors for American culture; our music is always a national voice. Katz said he and his teachers try to keep programs open and flexible, so it can impact students in a way that feels personal. It's not about turning them into vocal proponents of American foreign policy, as past diplomacy might have tried. In the end, it's up to the kids to choose how to use the music they’ve learned.

"We try to be organic," said Katz. "We're not trying to foist some message on how they have to get along." It's their choice to decide how they want to harmonize in the world.