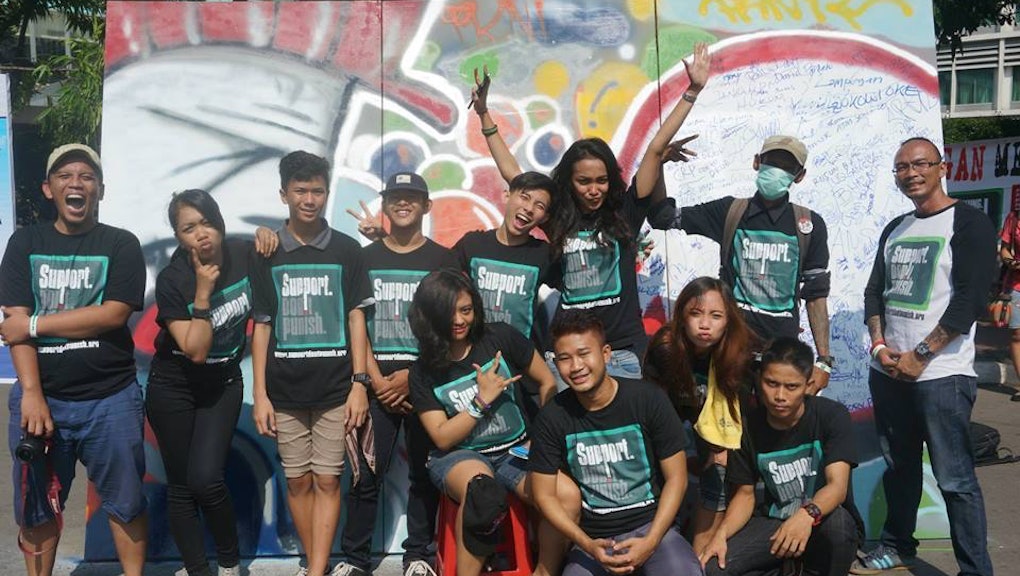 People took to the streets in many different countries Thursday, waving flags and chanting.

World Cup? Oh no — these activists are protesting the War on Drugs.

Support Don't Punish, an international organization seeking drug law reform, hosted a "day of action" to coincide with the UN International Day Against Drug Abuse and Illicit Trafficking, also held Thursday. Events were planned in more than 100 cities across 46 countries.

A global issue: We tend to think of the War on Drugs as a purely American phenomenon, but its ramifications affect the whole planet. A report released in May by economists at the London School of Economics concluded that "it is time to end the 'war on drugs' and massively redirect resources towards effective evidence-based policies underpinned by rigorous economic analysis."

Strict prohibition often ends up transferring problems rather than reducing them, the researchers found. While cracking down on drugs might lower related crimes in the U.S., for instance, it increases crime in producer countries like Colombia. And that's if the crackdown works at all — "the available evidence shows that there are very few success stories in the fight against drug production and trafficking," the report said.

The War on Drugs has cost the U.S. $51 billion a year, while producing no decrease in drug use or availability. Thanks in large part to drug laws and law enforcement (including use of militarized SWAT teams), black Americans are incarcerated at a rate more than six times that of white Americans.

The kicker? Even though black males have a 29% chance of serving prison time and Latino males have a 16% chance, compared to only 4% for white males, white and black Americans sell and use drugs at similar rates. Latinos actually sell and use drugs less than whites, though you wouldn't know it from sentencing and punishment statistics.

What we're doing: Thursday's protests aren't the only movement on the topic. Twenty-two states have legalized medical marijuana, while Colorado and Washington have legalized it for recreational use. Colorado is expecting more than $1 billion in sales, meaning the state will receive $134 million in revenue.

Public opinion around the world is changing, too. A CNN poll found that 55% of respondents felt marijuana should be legal, up from just 16% in 1987. (Helping those numbers? Fifty-two percent of respondents this year said they had tried marijuana in the past.)

Even if protesters can't convince the pope, maybe they can at least get through to other lawmakers: There are better ways to deal with this.