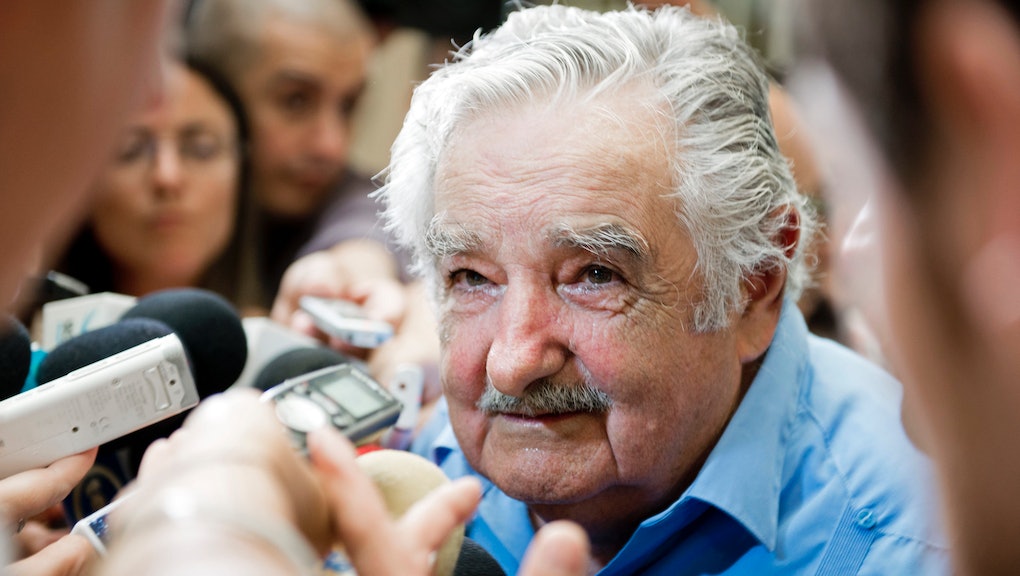 15 Powerful Quotes From the World's Most Humble President

"Modest yet bold, liberal and fun-loving."

Naming Uruguay the country of the year in 2013, the Economist may very well have described the rising nation's head of state, President José "Pepe" Mujica.

Known for his unusual frankness, fiery oration and bold leadership to turn ideas into action, the 78-year-old leader possesses and practices the very characteristics that many world leaders fail to emulate. He has also garnered international acclaim for his progressive policies, down-to-earth personality and simple presentation, which has earned him a reputation as "the world's poorest president."

Living in a small, one-bedroom farm with his wife, Sen. Lucia Toplansky, and a number of dogs (including three-legged Manuela), Mujica donates 90% of his salary to charity, leads by example in an age of austerity and has gained international acclaim for pushing ahead with policies on cannabis legalisation, same-sex marriage and abortion, while decrying excessive consumption.

Mujica practices the simplicity he preaches. Here are some of our favorite quotes by the one-of-a-kind president with a powerful message:

1. On revolutions and revolts

"I've seen some springs that ended up being terrible winters. We human beings are gregarious. We can't live alone. For our lives to be possible, we depend on society. It's one thing to overturn a government or block the streets. But it's a different matter altogether to create and build a better society, one that needs organization, discipline and long-term work. Let's not confuse the two of them. I want to make it clear: I feel sympathetic with that youthful energy, but I think it's not going anywhere if it doesn't become more mature." (Source)

When asked about opposition to legalizing marijuana, he said:

"It has always been like that with changes. In 1913, we established divorce as a right for women in Uruguay. You know what they were saying back then? That families would dissolve. That it was the end of good manners and society. There has always been a conservative and traditional opinion out there that's afraid of change. When I was young and would go dancing at balls, we'd have to wear suits and ties. Otherwise they wouldn't let us in. I don't think anyone dresses up for dancing parties nowadays."

"We have sacrificed the old immaterial gods, and now we are occupying the temple of the Market-God. He organizes our economy, our politics, our habits, our lives, and even provides us with rates and credit cards and gives us the appearance of happiness.

"It seems that we have been born only to consume and to consume, and when we can no longer consume, we have a feeling of frustration, and we suffer from poverty, and we are auto-marginalized." (Source)

"We can almost recycle everything now. If we lived within our means, by being prudent, the 7 billion people in the world could have everything they needed. Global politics should be moving in that direction. But we think as people and countries, not as a species." (Source)

5. On abortion and same-sex marriage

"We applied a very simple principle: Recognize the facts. Abortion is old as the world. Gay marriage, please — it's older than the world. We had Julius Caesar, Alexander the Great, please. To say it's modern, come on, it's older than we are. It's an objective reality that it exists. For us, not legalizing it would be to torture people needlessly."

When asked about Uruguay offering its services to try and end the 50-year-old conflict in Colombia between the government and the ELN rebel group:

"From afar, it seems like a war without a solution and like a long sacrifice for the entire country. So when a president appears who tries to open a path to peace, I think that deserves support, because there is a lot of pain, and if they try to settle scores, the war will never end. But there is an opportunity. I would feel selfish if I did not help in any way.

"Help does not mean to intervene. I will not meddle if I am not invited to do so. But if I can serve as a go-between with my experience, I will support the government's call for dialogue with the rebel forces who also have their problems, who also have their fears. I think all us Latin Americans have to help."

7. On staying humble in office

"As soon as politicians start climbing up the ladder, they suddenly become kings. I don't know how it works, but what I do know is that republics came to the world to make sure that no one is more than anyone else." The pomp of office, he said, is like something left over from a feudal past: "You need a palace, red carpet, a lot of people behind you saying, 'Yes, sir.' I think all of that is awful."

8. On redistribution of wealth

"Businesses just want to increase their profits; it's up to the government to make sure they distribute enough of those profits so workers have the money to buy the goods they produce," Mujica told businessmen at the U.S. Chamber of Commerce. "It's no mystery — the less poverty, the more commerce. The most important investment we can make is in human resources."

"What's sad is that an 80-year-old grandpa has to be the open-minded one. Old people aren't old because of their age, but because of what's in their heads. They are horrified at this, but they aren't horrified at what's happening in the streets?" (Source)

"Worse that drugs is drug trafficking. Much worse. Drugs are a disease, and I don't think that there are good drugs or that marijuana is good. Nor cigarettes. No addiction is good. I include alcohol. The only good addiction is love. Forget everything else." (Source)

11. On being called the world's poorest president

"I'm not the poorest president. The poorest is the one who needs a lot to live. My lifestyle is a consequence of my wounds. I'm the son of my history. There have been years when I would have been happy just to have a mattress." (Source)

"I have a way of life that I don't change just because I am a president. I earn more than I need, even if it's not enough for others. For me, it is no sacrifice, it's a duty." (Source)

13. On his goals for Uruguay

"My goal is to achieve a little less injustice in Uruguay, to help the most vulnerable and to leave behind a political way of thinking, a way of looking at the future that will be passed on and used to move forward. There's nothing short-term, no victory around the corner. I will not achieve paradise or anything like that. What I want is to fight for the common good to progress. Life slips by. The way to prolong it is for others to continue your work." (Source)

14. On being a president

"A president is a high-level official who is elected to carry out a function. He is not a king, not a god. He is not the witch doctor of a tribe who knows everything. He is a civil servant. I think the ideal way of living is to live like the vast majority of people whom we attempt to serve and represent." (Source)

15. On the secret to happiness

"To live in accordance with how one thinks. Be yourself and don't try to impose your criteria on the rest. I don't expect others to live like me. I want to respect people's freedom, but I defend my freedom. And that comes with the courage to say what you think, even if sometimes others don't share those views." (Source)