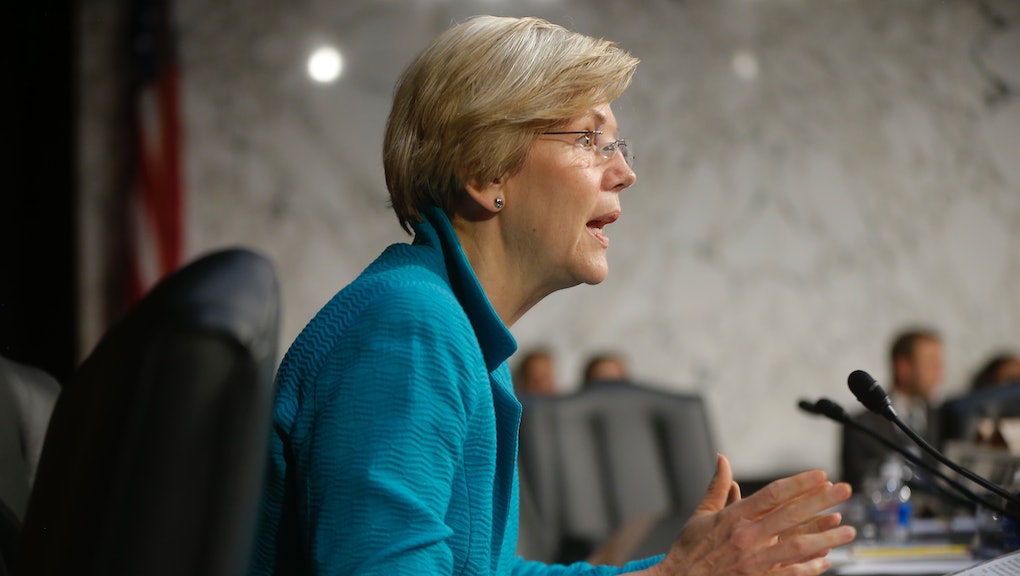 The statistic: 88%. That's how many young conservatives agree with Sen. Elizabeth Warren (D-Mass.) on one of her main talking points. Though Warren may be seen as a darling of the left, it could actually be America's conservative voters that propel her political career.

A new Pew survey groups together Americans based on political opinions and reveals that many conservatives come down on on the more populist side of things. Two groups, "young outsiders" and "steadfast conservatives," tended to agree that our economic system is unfair and that large companies have too much power. This has been an idea Warren has consistentyl been championing for several years now.

Eighty-eight percent of young outsiders, a more libertarian-leaning group mainly in their 20s and 30s, agreed that too much power is concentrated in the hands of a few companies, while an equally surprising 69% agreed that the economic system unfairly favors the powerful. Steadfast conservatives were more reserved on the former measure, with 48% believing it's unfair (compared to 47% who find it fair), but in line on the second — 71% think too few companies have too much power.

Business time: If that seems surprising, it's because the Republican Party line has shied away from statements about the economic system being unfair. You can thank a third group for that, according to Pew: "business conservatives."

Business conservatives are the most affluent of all the groups in the study, with nearly half making a family income more than $75,000. This group has the most members interested in finance and the most who invest in the stock market.

Unlike their fellow conservatives, 67% of this group think that the economic system is fair to most people and 57% think large companies don't have too much power.

What it means: Thanks to their political activism and large amounts of money, business conservatives do more than these other groups to shape the Republican party line. Steadfast conservatives are just as active, but can't donate nearly as much; young outsiders are extremely skeptical of both parties and less likely to donate or become involved.

Warren 2016? So if Warren were to run in 2016, would she be able to peel off some of these populist conservatives? It could be tricky: Warren's wing of the party has some fundamental disagreements with even the most corporate-averse Republicans, and Americans are more partisan than ever. But despite the recent electoral trends heading into 2016, looking ahead to 2020 or even 2024 opens up the possibility for radical shifts in voting tendencies, and as young outsiders become a bigger slice of the party (middle-aged insiders, if you will) there's a chance Warren could curry the favor of this voting bloc.

And if not Warren, these numbers could mean there's room for a more populist Republican candidate, that is, if they can survive without the big donations of business conservatives. Who's ready to be the Elizabeth Warren of the right?