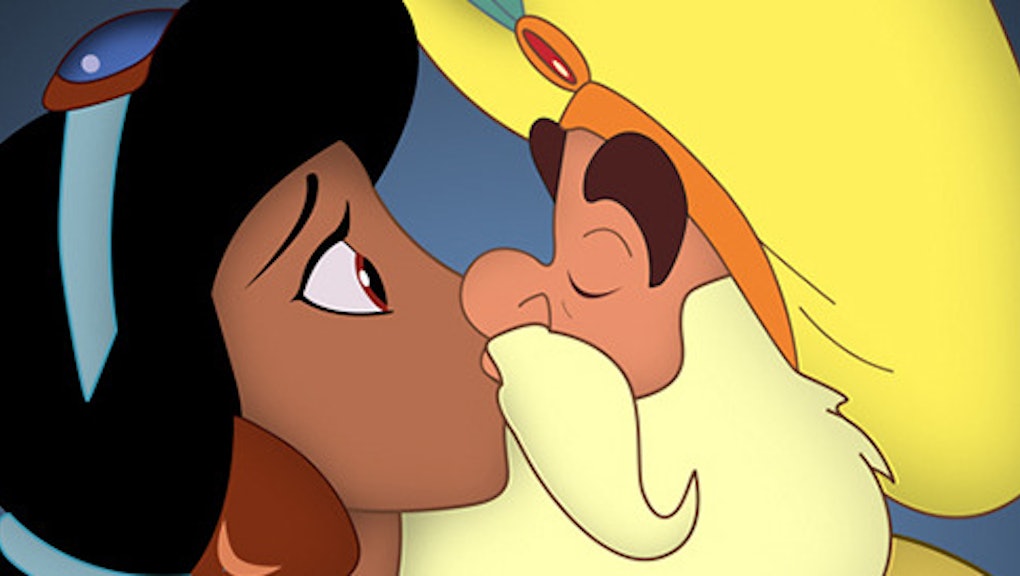 A controversial new awareness campaign called "The Princest Diaries" is hoping to use the famous fairy tale characters to raise awareness of a very dark issue. Created by artist Saint Hoax, the artwork is an uncomfortable juxtaposition of childhood fantasy and real-world nightmare.

While some of the artist's past pieces have been shocking, none have quite lived up to her newest campaign which depicts the princesses Aurora, Jasmine and Ariel being victimized by their own fathers.

Estimates of the number of child abuse victims in the United States are notoriously difficult to come by, due to the unsurprising fact that a vast number of such crimes go unreported. However, according to a Center for Disease Centers study from 2006, approximately one in four women and one in six men later reported being sexually abused before the age of 18.

Meanwhile, a report issued in 2000 by the U.S. Bureau of Justice Statistics found that 34.2% of minors who were sexually abused were victimized by a family member.

The artist told the Huffington Post that she was moved to create the campaign after learning that a friend had been abused.

"That story shocked me to my core," she told the Huffington Post in an email. "As an artist/activist I decided to shed light on that topic again in a new form. I used Disney princess because it's a visual language that my targeted audience would be attracted to."

There is certainly something to be said for the artist's use of imagery, as disturbing as it might seem. Creating campaigns that specifically target potential young victims has been used before, notably in Spain last year, when child-advocacy organization ANAR created powerful outdoor ads designed to send different messages to children and adults. Using a technique known as lenticular printing, the ads changed depending on the height of the viewer: Those under about 4-foot-3 saw a picture of a bruised child's face, along with ANAR's hotline number and copy that reads, "If somebody hurts you, phone us and we'll help you." Meanwhile, anyone taller saw the face without the hotline, along with a different message: "Sometimes child abuse is only visible to the child suffering it."

Although the Daily Dot notes that Disney — which is infamously litigious — may not be quite so pleased with the raw material, Saint Hoax said she stands by her choice of imagery.

"I was extremely hesitant about posting the series. I feared that it might be clashing with Disney's principles," Saint Hoax told BuzzFeed. "But today, just one day after publishing my posters, I received an email from a girl thanking me for the project and telling me that she decided to report her father after seeing the posters. I actually cried. You have no idea how glad I am now that I actually published the series."

"Although I tackle dark subjects, I'm a very colorful person," the artist told Mic. "My main concern at the end of each project is to send a message of hope, and I think that message goes across through my aesthetic treatment."