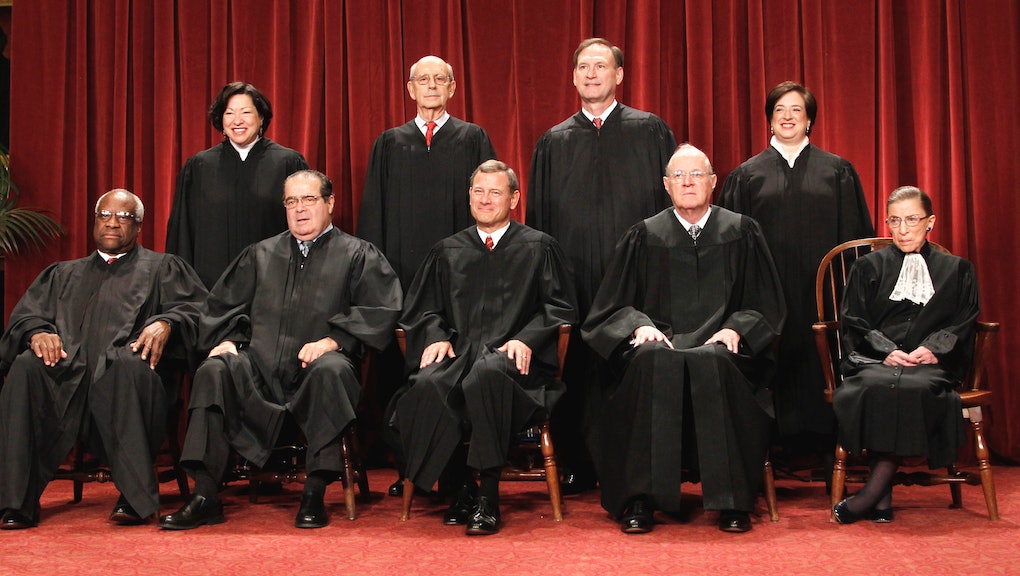 On Monday, the Supreme Court in their controversial Hobby Lobby ruling equated contraception to abortion. The problem with their decision is this: There's absolutely zero science to back it up.

"The owners of the businesses have religious objections to abortion, and according to their religious beliefs the four contraceptive methods at issue are abortifacients," Justice Samuel Alito said.

Of the four methods Christian company Hobby Lobby claims cause abortion (Plan B, ella, and two IUDs), exactly zero prevent a fertilized egg from implanting in the uterus. All four methods work by stopping fertilization from happening in the first place.

Unfortunately, this isn't the first time the Supreme Court has ignored science.

Last June in a case about the patenting of genetic material, Justice Antonin Scalia wrote, “I join the judgment of the Court, except [the portions] going into fine details of molecular biology. I am unable to affirm those details on my own knowledge or even my own belief.”

Clearly there's a science illiteracy on the Supreme Court.

And that's a huge problem: The Supreme Court has consistently favored the beliefs of a 78-year-old conservative male over the consensus of the scientific community. Here are just a few examples:

They’re behind on the science of our environment: In their most recent decision to uphold most of President Obama’s limits on power plant emissions, three justices dissented. Justices Scalia and Thomas said they didn’t think the Environmental Protection Agency should be able to make decisions about pollution over the states. But that’s exactly why President Richard Nixon formed the agency in 1970 — to give a group of expert scientists the ability to decide how to protect people and the environment. Then again, in the landmark 2007 case that designated carbon dioxide as a pollutant, Justice Scalia said there was no “causal connection” between air pollution and climate change. Wowza.

They’re behind on the science of us: Instead of listing the scientific reasons to rule that specific segments of DNA couldn’t be copyrighted in the landmark 2013 case on genetic patenting, the Justices peppered their ruling with generic statements ostensibly meant to hide their ignorance.

Here’s one little gem: “The study of genetics can lead to valuable medical breakthroughs.” Thanks Supreme Court. We had no idea.

They’re behind on the technology we use: In 2006, Chief Justice John Roberts couldn’t get his mind around eBay. When a lawyer told him it was an online marketplace, Chief Justice Roberts responded, “I mean, it’s not like he invented the internal combustion engine or anything. It’s very vague.” No, Pierre Omidyar did not figure out how to convert gas to energy. But his multimillion-dollar, 30-country technological innovation that did change the way people buy and sell goods across the planet.

They’re behind on healthcare: One point the Hobby Lobby case touched on, but didn’t expand upon, was the fact that health insurance in the U.S. is still tied to employers, a practice that began during World War II as a method of circumventing wage controls designed to respond to inflation. The U.S. doesn’t have wage controls anymore. So why are employers still providing health insurance? None of the judges addressed this on Monday.

The crux of the problem — aside from the justices’ hankering to boil down complex science into analogies ranging from baseball bats to chocolate chip cookies — centers on a 1993 ruling that directed judges to act as “gatekeepers” in the courtroom. The ruling, Daubert v. Merrell Dow Pharmaceuticals, said judges should had the authority to examine the scientific method underlying expert evidence and to admit only that evidence that was both “relevant and reliable.” Perhaps judges who compare eBay to the internal combustion engine are not the best authority figures to decide what is technically, or scientifically, relevant.

When the Supreme Court issued its opinion in Daubert, it suggested four criteria for determining whether the science was reliable and admissible:

1) Is the evidence based on a testable theory or technique;

2) Has the theory or technique been peer reviewed;

3) In the case of a particular technique, does it have a known error rate and standards controlling the technique’s operation; and

4) Is the underlying science generally accepted

It’s that fourth point that’s been a problem recently — in all of the critical cases we’ve seen, from defining abortion to deciding how pollutants should be regulated — scientists seem to agree, but the judges don’t.

We are losing patience. A June Gallup poll showed just 30% of Americans were confident in the Supreme Court’s decision-making ability, the lowest it’s been in five years and its second-deepest drop since 1991.

The Supreme Court’s lack of understanding about science and tech might make for a hilarious YouTube mashup, but it certainly doesn’t make us any better off.