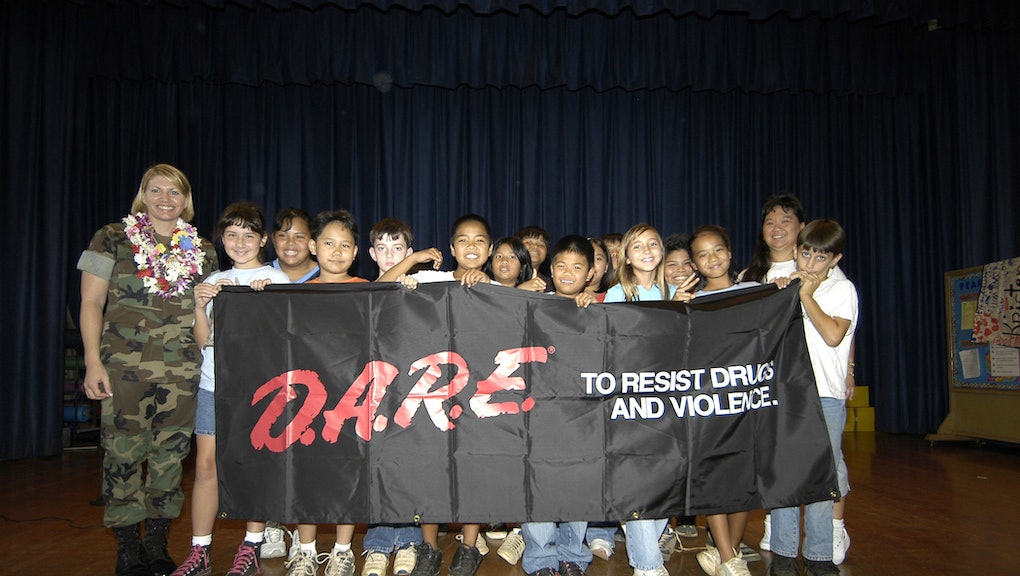 The 5 Big Lies That D.A.R.E Told You About Drugs

It's a fond school memory: the D.A.R.E. program that taught us all to "just say no" to drugs. We were lectured about the dangers of drugs and counseled on how to deal with risky situations.

But just how effective was the program at keeping kids away from drugs? Not very, and it might have a lot to do with the way D.A.R.E. consistently misrepresented the dangers of drug use.

"The programs were a scared-straight approach [that] appeals to people who aren't addicts. The biggest thing that sticks out is the emphasis on just say no," a drug addict told VICE about D.A.R.E. "We practiced saying, 'No.' I was on board with saying no to drugs. I think there was a really big emphasis on abstinence. They never showed us the realities of drugs and alcohol. We all saw a black lung and looked at a liver with cirrhosis, but the effects on your personal life were skipped over almost entirely."

In that vein, here are some common claims that you might have encountered during D.A.R.E. or from other drug warriors. Some of them are no longer being used, while others are still in vogue. But one thing they all have in common: They're patently false.

D.A.R.E. used to claim marijuana as a "gateway drug" — that marijuana use actually leads to subsequent abuse of more dangerous substances. And actually, there is a correlation between early use of marijuana and other substances.

But that correlation isn't as clear as it seems. Scientists have had major doubts about the gateway drug hypothesis since the 1990s. A 1999 report published in the Institute of Medicine of the National Academy of Sciences concluded that there was "no conclusive evidence" marijuana had any particular pharmacological properties that would encourage the subsequent use of other drugs. The vast majority of marijuana smokers never touch other drugs. In 2009, 2.3 million people reported trying pot, while just 617,000 used cocaine and 180,000 tried heroin. According to the Marijuana Policy Project, 107 million Americans have tried marijuana, while just 37 million have tried cocaine. Despite the huge number of pot smokers, less than 0.1% of Americans have used either coke or heroin in the past month.

One study of 12th graders published in the Journal of School Health indicated that if there is a "gateway drug," alcohol would be a more likely culprit. A 2012 review in Drug and Alcohol Dependence noted that 83.2% of hard drug users in Japan had never touched cannabis. A RAND report in 2010 even found some evidence that liberal marijuana laws in the Netherlands actually slightly decreased the number of young pot smokers that tried other drugs.

There are a number of ways to explain the correlation between marijuana and other substance use. One is that people who smoke marijuana may just be the type of person interested in exploring other ways of getting faded. Another is that pot smokers, integrated into the illicit market, may be able to more easily locate other illegal substances. Or possibly, weed is probably just the first drug American teenagers run into.

For what it's worth, D.A.R.E. now points to tobacco and alcohol as the primary gateway drugs. But the theory is still full of holes. Evidence suggests that there are many gateway behaviors which might lead to subsequent drug use. One study even suggested that teaching the gateway drug theory to middle and high school students was counterproductive.

Hardline drug warriors think that drugs actually cause crime and that cutting off the supply of drugs through strict enforcement will ultimately result in less crime.

Unfortunately, there's little to back this up. Anti-drug agencies, for example, actively tried to drive cocaine prices up to dissuade people from doing cocaine, but when cocaine got cheaper, violence actually decreased since the high profit margins and incentives for rough competition were removed. As an example, Llewellyn Hinkes-Jones at Citylab notes that "drug use in Mexico is relatively low, approximately 2%, whereas in America it hovers around 8%. Yet, violence there is at an all-time high."

In a survey of Mexican and Colombian drug violence, author and economist Francisco E. Thoumi argues that drug-related crime is the result of complex social conditions. Repressive anti-drug policies can't effectively deal with drug-related crime because the real causes of the violence are related to "governance and the rule of law," not the drugs themselves.

Violence arises from high-stakes competition in an illegal and unregulated market, and authorities can often accidentally aggravate the situation by destabilizing existing power structures. In other words, the strong correlation in modern societies between drugs and crime partially exists simply because drugs are illegal.

Research further suggests that the relationship between drugs and crime in other contexts is extremely complex. For example, drug use and crime may both have common origins like poor social support systems, poverty and difficulties in school. Unfortunately for D.A.R.E., this "simple" causal link appears to be false.

3. Just one dose will get you addicted.

In the 1950s and '60s, scientists were alarmed by a series of experiments in which laboratory rats were given unlimited doses of opiates. The rats wasted away, not even ingesting easily accessible food or water. The implications were ominous: What would happen if people became hooked like the rats? The takeaway was that drugs are so addictive that people need to be kept away from them at all costs.

But the story wasn't so clear-cut after all. Take heroin, one of the most addictive drugs, for example: Only 23% of users become dependent. By some measures nicotine is more addictive, possibly because tobacco companies made cigarettes more addictive by design. The actual rates for dependency are 15% for alcohol, 17% for cocaine, 23% for heroin, and 32% for nicotine. Marijuana clocks in at just 9%.

The famous "Rat Park" experiment conducted by Canadian psychologist Bruce Alexander suggested that the strict laboratory conditions (cramped, miserable and hooked up to tubes) in the original tests were at least partially causing the rats' deadly addictions.

Notable scientists like psychiatrist Stanton Peele and neuropsychopharmacologist Carl Hart argue that our current models of addiction, while well developed, are simply insufficient because they often disregard environmental factors. Peele argues that substance abuse problems are intertwined with "complex social factors relating to family disfunction, emotional unhappiness or work stress," and that blaming only the drugs themselves is a distraction from underlying psychological and social problems.

Dr. Hart described some of his research previously to Mic: "If you provide crack cocaine addicts with alternatives like money, will they take the money or will they take the drug? It turns out that they'll take five bucks or a merchandise voucher over a low dosage of crack a good amount of the time. Those results contradicted the popular conception of the 'crackhead' as someone who couldn't turn down another hit."

Evidence has repeatedly demonstrated that many Americans are able to kick their habits without going to drug or alcohol treatment, suggesting that a problem with alcohol or drugs isn't the death sentence D.A.R.E. and other drug warriors told you in school.

4. You'll get flashbacks for the rest of your life.

Stories about acid flashbacks that haunted users for the rest of their lives were a staple of anti-drug lectures and propaganda for decades. But just how common is the trip that never ends?

Some users of psychedelic drugs do report occasional flashbacks: brief, evocative sequences that invoke the illusion of tripping, usually just for a second or two. These can be disconcerting, but are typically mild and usually occur in a short time frame (within days) of taking drugs. They don't persist with time and generally don't interfere with a person's life or psychological state.

However, a much more severe condition exists called Hallucinogen Persisting Perception Disorder (HPPD) in which visual disturbances similar to the effects of tripping remain long after the drug has faded. The affected users are no longer under the effects of the hallucinogen, but have persistent visual anomalies that resemble the effects of the drugs, like seeing geometric shapes, flashes of color, afterimages and the movement of objects. Estimates of occurence range widely from one in 50,000 hallucinogen users to one in 25 on a web poll of 2,500 users on drug community Erowid. A 2002 review of 50 years of research by John Halpern found that existing evidence could not even "crudely" project HPPD's prevalence.

People take psychedelics for a variety of reasons and often have positive experiences as well as bad trips. But misrepresenting their effects to students won't gain trust and probably makes students less likely to take other information from the same source seriously.

By the late '90s, studies were showing that D.A.R.E. had minimal effects on drug use and might have actually been counterproductive. And this was all despite a growing annual budget estimated at around $1-1.3 billion. In 2000, a federal judge ruled that charges in Rolling Stone and New Republic stories that the program was ineffective were "substantially true." D.A.R.E.'s claims that all drugs are equally bad and that peer pressure and low self-esteem are major causes of drug use were being contested by serious research. Also being contested was the vaunted "Just Say No" approach, which relies on abstinence alone to keep kids off drugs.

The surgeon general classified D.A.R.E. as an "Ineffective Primary Prevention Programme" in 2001, and, by the program's own estimate, it subsequently lost some 80% of its federal funding. For a period of time ending in 2009, the organization wasn't recognized as following an evidence-based cirriculum, meaning that it might not have been much better than any other random person with strong views on how to raise teenagers.

The new program, Keepin' it REAL (yes, really), is an improvement, but it still has significant shortfalls. SAMHSA's National Registry of Evidence-based Programs and Practices rates it at just 1.7 out of 4 on substance use resistance and its "readiness for dissemination" at just 1.5 out of 4. (Other rankings are higher, and SAMHSA says the current cirriculum is scientific.)

In 2012, the Marijuana Policy Project noted that D.A.R.E.'s website was still circulating unproven claims that marijuana could weaken the immune system and cause insanity or lung disease. Its stance on the issue has since been kind of weird. While D.A.R.E. removed marijuana from its cirriculum that year, it's still open for discussion provided a sudent brings it up. Either way, their website still posts articles alleging legalization might "double or triple" pot smoking rates and is already causing "tragedies." Sometimes it cites the pope for direction on public policy. None of this bodes well for an open discussion about drugs.

Other alternative programs with consistently higher ratings exist, and many of them foster engaging and open discussions about drugs. It might be time to give them a try instead of letting D.A.R.E. continue to dominate the discussion.