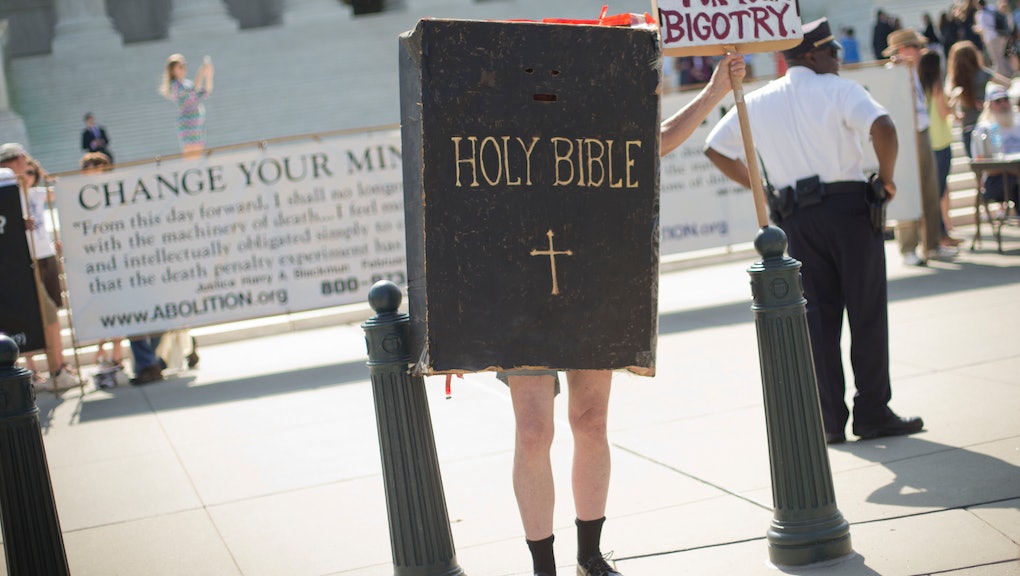 A letter from religious leaders answers the lingering question of how the Supreme Court's recent Hobby Lobby ruling will be appropriated to test the extent of religious exemption in other domains. The potential victims of these desired exemptions? The LGBT community — surprise, surprise.

In the stunning 5-4 decision, the Supreme Court essentially determined that private corporations have rights — like individuals — and can deny contraception to women if they believe that its use is immoral according to their religious beliefs. In other words, they can deny certain types of healthcare.

Some may not be surprised by the ruling, given the Supreme Court's penchant for favoring the rights of corporations (lest we forget, this is basically the same group that gave a middle finger to campaign finance reform by allowing corporations to donate like individuals and then loosening the cap on what individuals can donate).

Allegedly, Hobby Lobby's ruling pertains solely to contraception — cold comfort, perhaps, for women who argue it's de facto result is to give preference to corporations over humans.

In the aftermath of the decision, some wondered if maybe the ruling would be quietly beneficial for LGBT Americans. Mark Joseph Stern, a columnist over at Slate, described how the Hobby Lobby decision "is good for gays," a rather short-sighted — and, one might argue, insulting — argument that rhetorically assumes only men can be gay. Stern attempted to quell fears that religious exemptions, under the Religious Freedom Restoration Act (RFRA) and the First Amendment's free exercise clause, can be applied broadly to discriminate against women, and also gays (who are apparently not women), too. Citing conservative Justice Samuel Alito, Stern claims the the scope of the ruling is limited:

"RFRA [can] not be used as a 'shield' to 'cloak … discrimination in hiring' as a 'religious practice to escape legal sanction.' RFRA doesn't permit employers to break a law when there is a compelling government interest backing that regulation, and, according to Alito, the government 'has a compelling interest in providing an equal opportunity to participate in the workforce.'"

He quotes Justice Anthony Kennedy, who reiterates that the ruling doesn't revise RFRA to condone anti-discrimination hiring practices against the LGBT community. "While religious liberty may permit employers to exercise their own beliefs to a point," Stern writes, quoting Kennedy, "'neither may that same exercise unduly restrict … employees in protecting their own interests.' Translation: This case is about birth control and nothing more — and as a general rule, employees still have a compelling interest in most laws that protect their rights."

What irony that just two days later, religious leaders asked President Obama for an expansion of the Hobby Lobby ruling to apply to their hiring practices in light of the Obama's planned executive order banning federal contractors from discriminating on the basis of sexual orientation and gender identity.

According to Kevin Theriot, vice president of religious freedom litigation for Alliance Defending Freedom, which represented the owners of Conestoga in the Hobby Lobby case, the signing of the EO or the passing of ENDA, "coerces" religious businesses to adopt practices not in line with their moral code: "The government would be saying you can't get the benefits of getting a federal contract unless you give up your religious liberty rights ... It's another form of coercion. The courts will have to weigh which is more important, religious freedom or the government's interest in eliminating discrimination based on sexual orientation."

The letter asks President Obama to reconsider his executive order in light of the court's ruling: "We are asking that an extension of protection for one group not come at the expense of faith communities whose religious identity and beliefs motivate them to serve those in need," it says.

Speaking to the Atlantic, Michael Wear, who organized the letter and has worked with the Obama Administration, boldly claimed that "this is not an antagonistic letter by any means," but that "the administration does have a decision to make whether they want to recalibrate their approach to some of these issues" after the ruling.

The letter's argument hinges on an idea of the "common good," which would be compromised if businesses with overt religious bents were not given a religious exemption — you know, like the massive one known as their federal tax exemption — to carry on as is, without having to worry about equal opportunity hiring practices. According to the letter, however, these potentially discriminatory predilections are actually helping the community, as they "extend from [organizational] religious beliefs and values: the same values that motivate them to serve their neighbors in the first place."

But not everyone assumes that individual identity is based first and foremost in faith, nor that that the "common good" is defined as integrally connected to religion. While Stern and others may be convinced otherwise, this letter represents a new constitutional battle of First Amendment proportions, one that could possibly "free exercise clause" versus the "separation of church and state," with LGBT Americans caught in the middle.