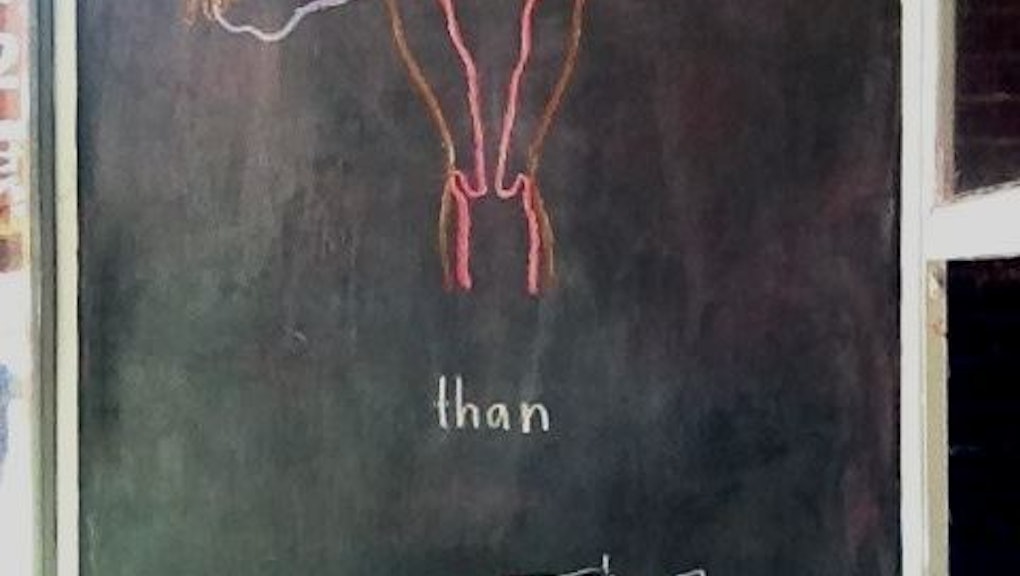 The Hypocrisy of America's Political Priorities, in One Hand-Drawn Image

What's that saying about a picture and its rhetorical worth?

It may be a cliche, but this Tumblr photo — originally posted by "jennwitte" but picked up and reposted to Facebook by RH Reality Check — features an almost childlike chalk drawing that points to an alarming reality in America:

Last week, the Supreme Court ruled in the highly publicized case of Burwell v. Hobby Lobby that family-owned corporations, including the craft supply chain, can abstain from offering their employees certain contraception options if those options are deemed religiously objectionable. In the aftermath of the ruling, which was widely criticized, the imagery above is looking more true than ever — need we even point to the fact that there is a constitutional amendment protecting an individual's right to "bear arms" but not for women to have access to critical forms of health care?

It's been said before, but we'll say it again, just for due diligence: Women use contraception for myriad reasons — not just for abortions.

That said, it is interesting to note the irony in how guns and contraception are federally regulated, considering that guns are much deadlier than the other.

Americans are more likely to own guns than anyone else in the world. We are also 20 times more likely to die by gunshot than a resident of another developed country.

Abortions, on the other hand, are at an all-time low since 1973 (the inception of Roe v. Wade), with researchers crediting the use of contraception in lowering the abortion rate.

With the Hobby Lobby decision it is not presumptuous to declare that this before-mentioned downward trend in abortions will reverse, and that abortion rates — and even illegal, back alley abortions — will increase due to regulations that make it difficult for women to have access to safe and affordable health care.

To put it a bit more bluntly, U.S. politicians allowed the nation's assault weapons ban — which outlawed 19 types of military-type assault weapons — to lapse in 1994 and have since failed to pass any meaningful reform measures. This is in contrast to the constant flurry of anti-abortion measures that have been proposed, passed and challenged in the similar amount of time. While gun violence obviously hurts everyone, women often bear the brunt of the rampages, especially when it comes to workplace or domestic violence.

According to the think tank Center for American Progress, between 2001 through 2012, "6,410 women were murdered in the United States by an intimate partner using a gun — more than the total number of U.S. troops killed in action during the entirety of the Iraq and Afghanistan wars combined." Meanwhile, as the number of abortions decreased, so has the number of complications; in 2008, the Centers for Disease Control noted that only 12 women were "reported to have died as a result of complications from known legal-induced abortions."