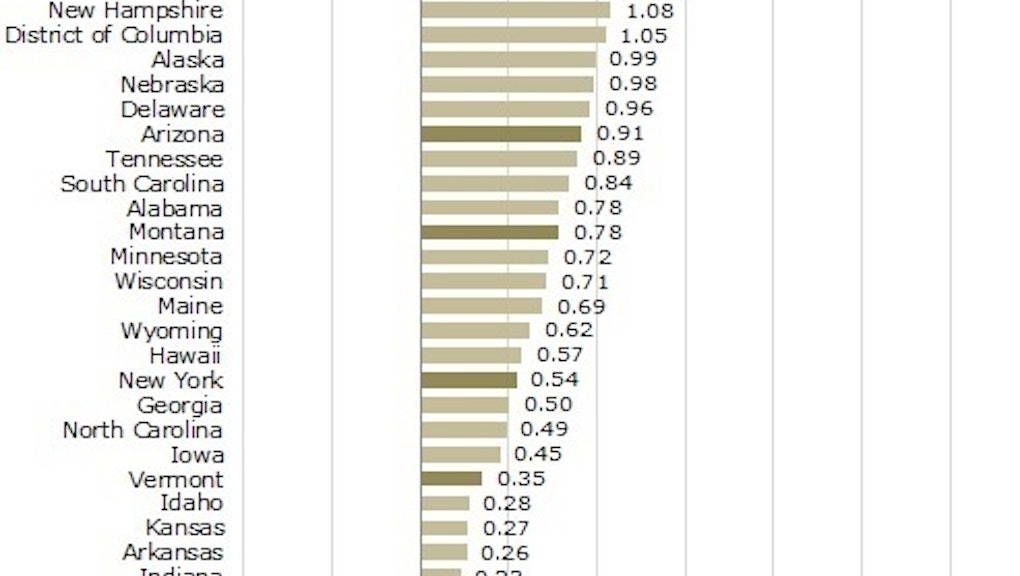 Each of these states has experienced higher employment: When critics lambaste an increase in the minimum wage in America, they often cite that it would be a job killer, an economic burden, and harmful to business.

New data may have debunked these arguments. Ben Wolcott of the Center for Economic and Policy Research found that in just the past five months, the 13 states that have increased their minimum wages saw higher employment growth than the states that did not.

It's not definitive, but the new results provide evidence that boosting the minimum wage does not hurt the economy.

Putting the job killer theory to death. Arizona, Connecticut, Colorado, Florida, Missouri, Montana, New Jersey, New York, Ohio, Oregon, Rhode Island, Vermont, and Washington have all increased their minimum wage either through legislation or through automatic increases tied to inflation. As a result, the employment rate is up in all those states by an average change of .99% compared to the first 5 months in 2013, which saw an average change of .68%.

Wolcott found that 12 out of the 13 states saw employment increase. Nine out of the 13 saw growth that is beyond the national median rate. This means that higher wages are not curtailing job growth because the states with an increased minimum wage mainly saw faster job growth than states that maintained their lower minimum wages.

This does not mean that increased minimum wages creates more jobs. But it does throw a wet blanket on the argument that minimum wages increases are detrimental.

What does this mean for the nation's economy? These state success stories are setting a precedent. Wolcott's new data adds to the mounting evidence that a boost in the minimum wage is good for America's economy in general.

A boost in the minimum wage from the national $7.25 an hour has done wonders for companies like Gap, cities like San Jose, Calif., and states like Washington, which saw the largest increase in small businesses last year.

If critics are still not convinced, they may want to consider former Secretary of Labor Robert Reich's accurate reasoning of why the minimum wage needs to be raised to $15 an hour. Even though the Democratic proposal to raise the minimum to $10.10 was killed by Senate Republicans, Reich's justification still applies.

Reich is constantly hammering in the idea that an increased minimum wage is not only smart economics, but it is also the right thing to do.