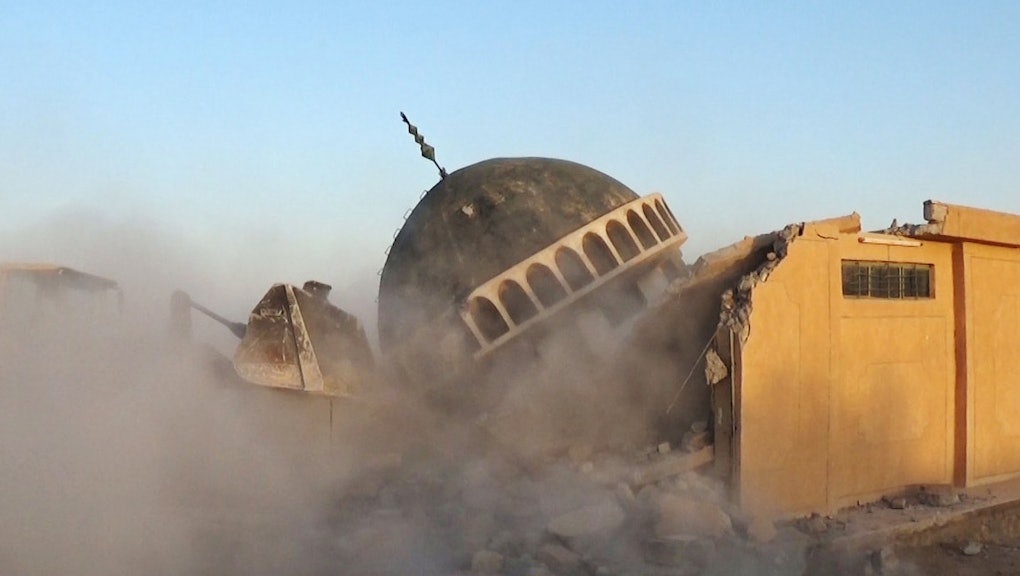 Islamic State (formerly known as ISIL), the violent militant group behind the bloody insurgency in Iraq, is also declaring war on religious icons and shrines.

A member of the group allegedly claimed that they would destroy the Kaaba, Islam's holiest site, once Islamic State conquers Saudi Arabia. The group now controls parts of Syria and Iraq as part of a plan to supposedly establish an Islamic state that adheres to their radical interpretation of Sunni Islam.

While it's unclear whether the group actually has its eyes set on destroying the Kaaba, Islamic State is claiming they have already destroyed important shrines in northern Iraq, a country that carries centuries-old history and was once the thriving cultural center of the Arab world.

Islamic State has declared war on "idolatry" and considers members of the Shia sect to be heretics. There's a problem deeper here than religion: The group has been taking advantage of discontent with the wildly corrupt and sectarian policies of Iraqi Prime Minister Nouri al-Maliki, who has disenfranchised the country's Sunni minority population.

Here are five photos of the important monuments that Islamic State has allegedly destroyed:

This place of worship in the city of Mosul is now in ruins. When Islamic State seized Mosul last month, the U.S. said their actions threatened the entire region of northern Iraq. Mosul's name translates loosely to "the junction," with a population of 2 million people before the attacks. The shrines' destruction shook the lives of many of those people.

The jihadists wiped out several places of worship in Tal Afar, 35 miles west of Mosul. This particular Shia mosque, once high and mighty, was destroyed with rigged explosives eight years after a suicide-bombing attempt on the same building.

This gorgeous dome was destroyed, along with at least four other mosques in Tal Afar, each one identified as a "Temple of Hussein." The reason for their destruction: supposed idol-worship. These places of worship were used for ceremonies to remember Hussein Ibn Ali's death.

4. The Tomb of the Girl in Mosul

Last month, Islamic State pulverized the Tomb of the Girl, a monument to a girl who is believed to have died of a broken heart. Islamic State's objection to the tomb is a display of the group's aggression toward any shrine at all. Historians believe the grave belonged not to a Shiite, but rather to a famous Sunni historian of medieval Islam.

Here's an old, undated photo of the tomb:

Many people with a broken heart have lost a place to grieve.

The statues of iconic poets, the mausoleum of a saint and the statue of the Virgin in the Church of the Immaculate in al-Shifa, have also all been destroyed.

The most harrowing quote comes from a schoolteacher in Mosul:

"No one protested even though these things are very dear to all communities in the city. Perhaps it is because everyone here is too busy trying to stay alive."

When extremism prevails, the footprints of history are wiped away.