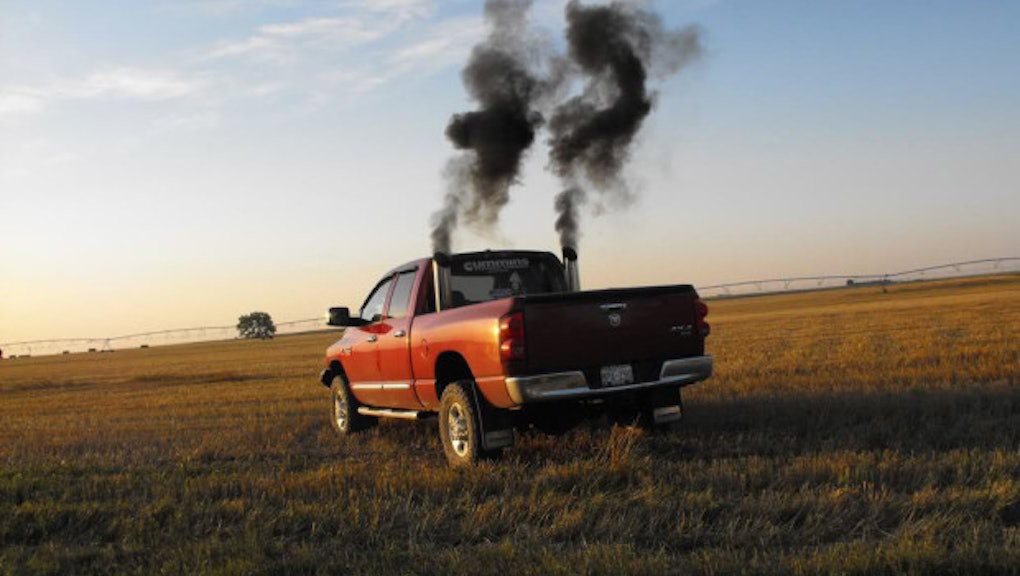 The news: There are legitimate acts of protest — petitions, lobbies, contacting your congressional representatives, taking to the streets — and then there is acting like an asshole.

The so-called "coal rollers" fall into the latter category. While the idea of jacking up diesel engines intentionally to release plumes of toxic smoke is nothing new, it's lately taken on a political dimension — specifically, against President Barack Obama and environmentalists.

That's right, people are actually going out of their way to pollute and waste money and fuel, all just to spite people who care about living in a clean world.

Why is this so popular? While Obama's proactive stance towards curbing carbon emissions and preserving the environment may be the root of many truckers' ire, it looks like anyone with a seemingly eco-conscious bent can end up as the target of coal rolling: hybrid car drivers, owners of "rice burners" (Japanese-made sedans) or anyone in a small car.

But the president remains a popular target. "I run into a lot of people that really don't like Obama at all," a coal rolling customization salesperson told Slate. "If he's into the environment, if he's into this or that, we're not. I hear a lot of that. To get a single stack on my truck — that's my way of giving them the finger. You want clean air and a tiny carbon footprint? Well, screw you."

And Facebook communities such as Rollin' COAL document these exploits:

There has to be a better way to protest. As Slate's David Weigel points out, coal rollers are akin to people who purposefully stock up on guns after a public shooting or waste electricity during Earth Hour. They may view these actions as civil disobedience against a certain liberal agenda, but they're more spiteful than effective acts of protest, particularly non-violent mass protest.

Even the most hardcore of coal rollers would admit that their hobby is not exactly good for the environment. They are just that invested in pissing off people who care about keeping the planet clean — that's the kind of energy and dedication that could be better used elsewhere.