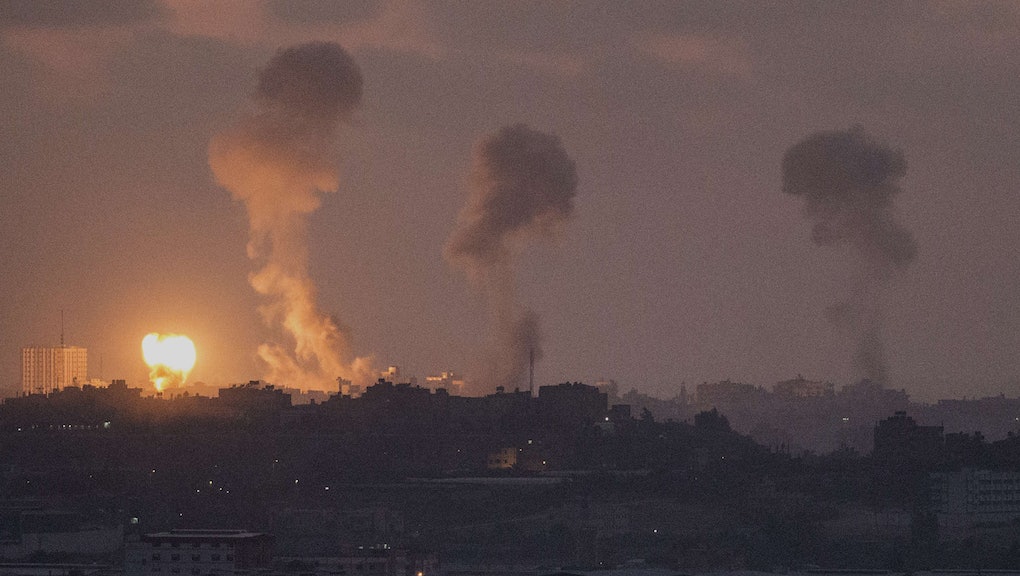 It's a photo that shows the bleak future that is to come for Gaza: plumes of dark smoke greeted residents of Israel and Palestine as they woke up Tuesday morning, signaling the start of a dangerous new phase of the conflict.

On Monday night, Israel escalated its attacks on Gaza, with the Israeli army, the Israeli Defense Forces (IDF), saying that 50 targets were hit overnight. The Israeli army is now contemplating a ground invasion in an offensive against Hamas. While plans have not been announced yet, the country's government approved permission to mobilize 40,000 reservists. The video below captures IDF infantry and tanks massing on the border of Gaza.

The people of Gaza — some 1.7 million people packed into a strip of land 25 miles long and seven miles wide — are currently struggling to keep up with their rapidly increasing losses. Haaretz reports that at least 16 Palestinians have been killed in the attacks, including children. According to Gaza's Health Ministry, more than 80 were wounded.

The photographs filtering from Gaza have been horrifying — melted, charred flesh that are unrecognizable as anything human. Harrowing details are also emerging: A strike on the house of the Kaware family, living in the southern Gaza, left at least seven people dead. Reports suggest that in an attempt to protect the house from attack, a crowd gathered on the roof in protest after Israeli authorities warned that the house would be targeted.

Image Credit: AP. Palestinians in Gaza City retrieve their belongings from the rubble from house leveled by an overnight Israeli airstrike.

Israeli Prime Minister Benjamin Netanyahu said the latest bombardment, officially named "Operation Protective Edge," was launched in response to 130 rockets fired at Israel by militants on Tuesday. Israel has tied the attacks to Hamas. The rockets have residents of southern Israeli towns like Ashkelon and Sderot in fear, in some ways like their Gazan neighbors.

The impact of rockets fired by Hamas is usually negligible. Of the 60 fired last month, just 28 hit ground. The majority of Hamas missiles hit open areas and cause very few casualties. That could change following the recent events. Tuesday afternoon, air raid sirens rang in Tel Aviv, and Hamas promised that the "enemy has crossed the red lines and will be made to pay the price for its crimes."

Image Credit: AP. A Palestinian salvaging his belongings from the remains of a house flattened by an Israeli air strike.

It's been a tense few weeks with rockets and air strikes from Israel exchanging almost nightly. During the fierce clampdown that followed the disappearance of three Israeli teenagers from the West Bank in June, the nightly targeting of Gaza has increased in intensity since Israeli authorities pinned the abduction on Hamas.

The Israeli government has also vowed to "expand the campaign." The country's defense minister, Moshe Ya'alon said, "Hamas chose to escalated the situation and it will pay a heavy price."

Among the more hawkish elements of Israeli society — those crying out for tough measures and even revenge in the wake of recent events — the fighting talk might be welcomed. But for the civilians who will undoubtedly be killed and injured, and for those lying awake in fear at night, the threat of more punishment is exacted on an imprisoned and impoverished population.