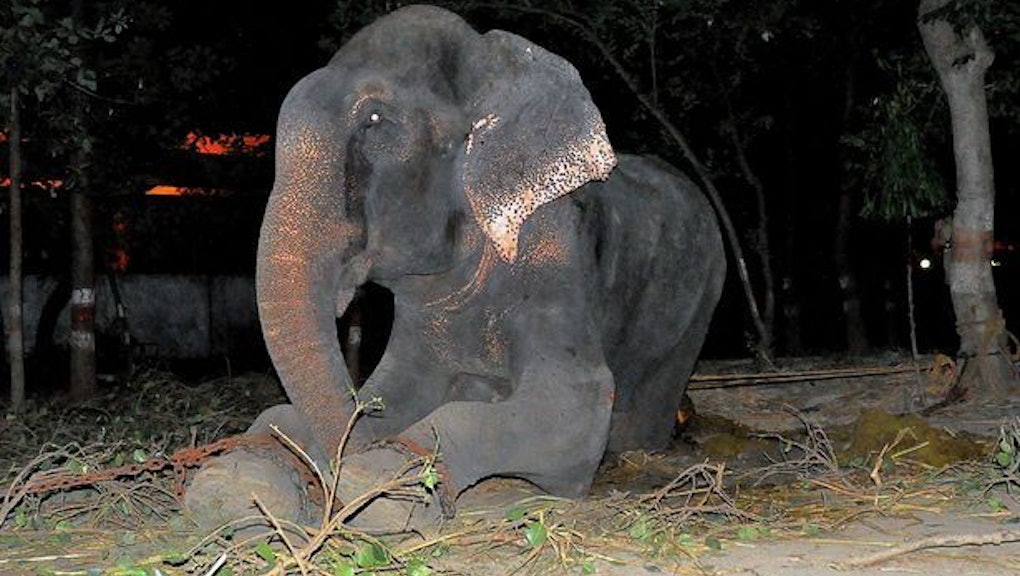 The news: The latest rescue mission of an imprisoned elephant in India is an animal rights victory.

After being shackled and abused for 50 years, Raju, an Asian elephant found in the Indian state of Uttar Pradesh, took his first steps of freedom in the early hours of July 4. And in response, he shed tears of joy.

"Raju was in chains 24 hours a day, an act of ­intolerable cruelty. The team were astounded to see tears roll down his face during the rescue," Pooja Binepal, a spokeswoman for rescue organization Wildlife SOS, told the Mirror.

From infancy, Raju has been chained, beaten and exploited. He was sold and resold from one captor to the next. Wildlife SOS's midnight mission to rescue him was spearheaded by 10 wildlife experts and veterinarians, along with two policemen. The team was able to free Raju from his spiked chains to bring him 350 miles away to SOS's Elephant Conservation and Care Centre. He has already started rehabilitation and eventually will join an adoptive family with two other rescued elephants.

The background: As the largest living land mammal in the world, elephants have no natural predators. Humans are their greatest threat, and from Asia to Africa, human development and poaching continue to jeopardize their existence.

Raju, like the majority of captive elephants in India, was taken from his mother as a calf. Poachers will often imprison an elephant for tourism, to transport goods, for circuses or as a domesticated animal, which is part of the mahout (elephant keeper) profession. As of 2013, there were "3,500 captive elephants in zoos, circuses, temples, government forest reserves and under private ownership in India," according to the Wall Street Journal.

Besides captivity, elephants also face the threat of poachers and smugglers who kill them for the Asian ivory trade. Approximately 20,000 elephants have to be killed each year for 220 pounds of ivory.

The takeaway: "Elephants are not only majestic, but they are highly intelligent animals who have been proven to have feelings of grief," Binepal said, "so we can only imagine what torture [for] half a century has been like for [Raju]."

Raju's life casts a dark shadow on how people can treat animals. But his rescue mission shows the brighter side to human intervention; because of humans, Raju will live out the rest of his days free and in peace.