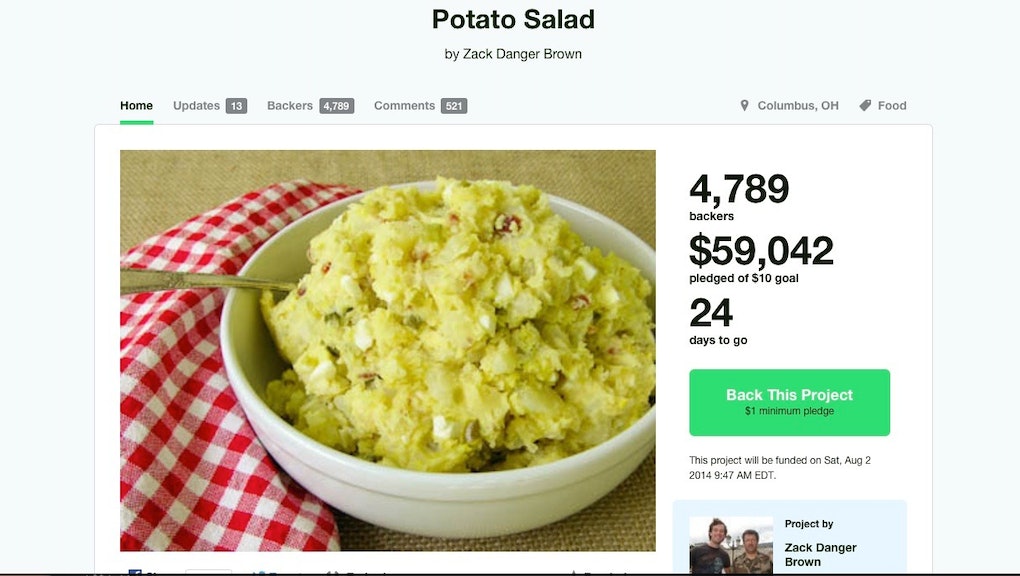 What on Earth Went Wrong With Kickstarter?

There is a man who has raised more than $40,000 on Kickstarter to make a potato salad. While this sounds like a decent premise for an Onion article, sadly it is not a spoof.

Unless you've been trapped under a WiFi-less rock, you're likely aware of the viral crowdfunding campaign by Zack Danger Brown, a genial enough-seeming fellow who has never made potato salad, and thought he'd like to give it a try. As any entrepreneurial young person is wont to do, he took to the Internet to make his potato salad dreams come true. Specifically, he took to Kickstarter, once used to lend a leg up to struggling artists and currently helping a man in Ohio make a mayo-based, starchy barbecue side.

While the story is ripe with jokes, and Brown is actually a pretty witty guy — Risks and Challenges: "It might not be that good. It's my first potato salad." — the campaign points to a larger and more important question: What in the world happened to Kickstarter, and when did it go so wrong? More pointedly, why do joke and celebrity campaigns get more attention than worthy artist pursuits?

When it launched in 2009, Kickstarter seemed like a utopian artistic venture, bright with energy and ideals. Who needs big business or deep pockets when you have an open market in which creativity can be financed based upon true merit — or at least true persuasion — rather than the commercial interests of some faceless executive? Funding countless artistic ventures, from self-published books to documentary films, the platform seemed too good to be true. And it sort of was.

One can trace the official downfall of Kickstarter to the death knell sounded in 2013, when Zach Braff nosed in on the action in order to fund his upcoming indie film, Wish You Were Here, his follow-up to Garden State. What did the Hollywood actor/director want from Kickstarter? A couple million bucks to make the movie happen. And he got it.

Braff's groundbreaking foray into crowdfunding for people who already have more funds than they know what to do with paved the way for other celebrities hoping to suckle at the Kickstarter teat. Some were successful, like Veronica Mars director Rob Thomas' campaign to raise funds for a big-screen version of the popular television show. Some were not, like Girls’ Zosia Mamet's failed effort to grub up money to fund a music video for her band. (The project raised $2,782 of the $32,000 goal.)

But overall, people didn't like this. One person disliked it enough to create the Facebook page "Keep Celebs Off Kickstarter."

Over the past year or so, the Kickstarter crowdfunding has seen some worthy triumphs — notably a recent campaign to "Bring Reading Rainbow Back," which raised more than $5.4 million for a reboot of the old-school educational program. However, it's also seen celeb kickstarting, shameless pleas to fund half-baked projects and, as is evidenced by #PotatoGate2014, extremely pricey and elaborate internet jokes.

But in all these campaigns, especially those that begin as irreverent comedic ploys that snowball into multi-thousand-dollar ventures, who's the butt of the joke? Is it Kickstarter, those opening their wallets or the artists struggling to gain traction for their legitimate projects and getting overshadowed by potatoes?

Kickstarter, for one, which has de-legitimized itself enough over the past few years to have earned itself hipster parody-cred as the butt of not one, but two, Portlandia spoofs.

But the joke is also on us, the people scraping the bottom of our often less-than-deep pockets to, in good faith, help fund projects we believe in — or believe to be legitimate. And lately, more often than not, they aren't.

Kickstarter's initial success spawned a number of similar sites, like IndieGoGo and GoFundMe, through which random users crowdsource funds for anything from exorbitant medical bills to tuition for study abroad trips to money to finance their honeymoons. When a singer/songwriter seeking funds to record their debut album shares space with a couple who would like $10,000 so that they can take their dream romantic vacation to Honolulu, please and thank you very much, it becomes hard to take either or any of it very seriously.

But where do we draw the line? And how much culpability must we, as partakers in (and funders) of these jokes take in the cheapening of a platform that once sought to provide an honest service for artists seeking an honest donation for an honest cause?

Plenty. And while Brown could yet make something good out of this runaway joke (donating all that cash to a charity for hunger — or at least some support group for potatoes and the people who love them) he's set a precedent for all manner of (likely less witty) idiots looking to get Internet famous by crafting fake Kickstarter projects in the name of comedy.

Has Kickstarter kicked the bucket? The proof is in the pudding. Er, the potato salad.