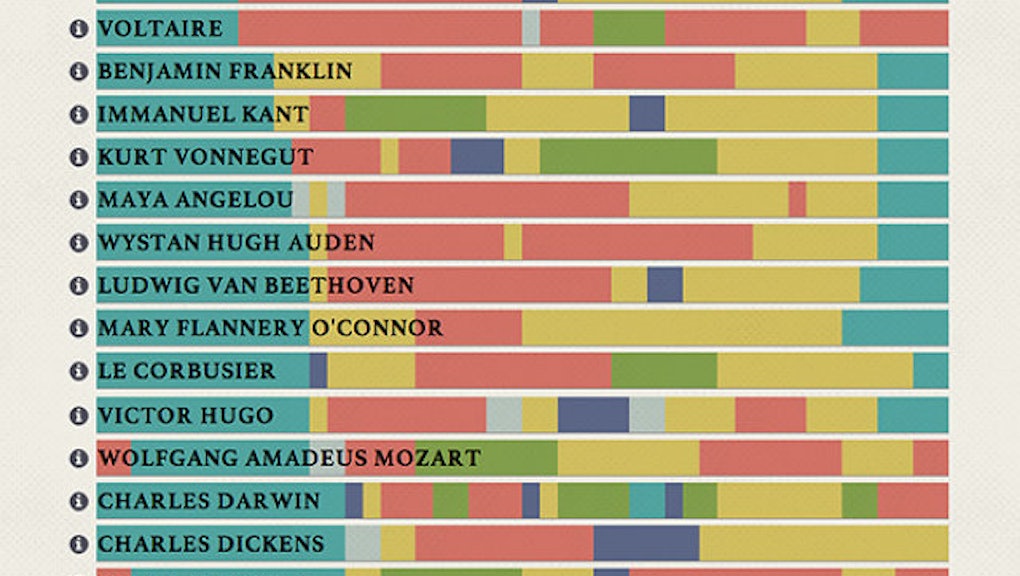 Here's How History's Most Brilliant People Scheduled Their Days

How do you spend each hour of your day? Based on research from Mason Currey's Daily Rituals: How Artists Work, Podio created beautiful charts that show how some of modern society's greatest thinkers, writers, artists and philosophers spent their days. It begins with the earliest risers and reveals how much time each of them spent sleeping, working, socializing, relaxing, exercising and at their day jobs or doing administrative stuff like managing their holdings or paying taxes.

A first observation, shared by Fast Company, is that many of our great thinkers and artists were pretty privileged people. A comparative few had day jobs and only Franz Kafka had an occupation outside his creative field (He "complained constantly that his day job at the Prague Workmen's Accident Insurance Institute oppressed his artistic calling"). Others were lecturers, professors, teachers or actually lived full-time doing what they loved — such as Sigmund Freud. In fact, there's a chicken and egg problem: Since the greats examined here were already generally well-off and moderately successful before the peak of their careers, it's hard to tell whether the schedules helped them reach success or were a product of it. But what is clear is that the vast majority spent large stretches of time doing intellectual and creative work on a regular basis.

That falls in line with Picasso's belief that "Our goals can only be reached through a vehicle of a plan, in which we must fervently believe, and upon which we must vigorously act. There is no other route to success."

Info We Trust points out that a surprising number of them spent large portions of the afternoon on vigorous walks.

Most of them also seem to have gotten enough sleep. Sleep deprivation can cause major problems for one's physical and mental health, so that's not a surprise. Kafka is another exception here, the only one to stay up all night — as it turns out, from about 11:00 p.m. to 6:00 a.m.

It's time to get to work figuring out how to work your time.