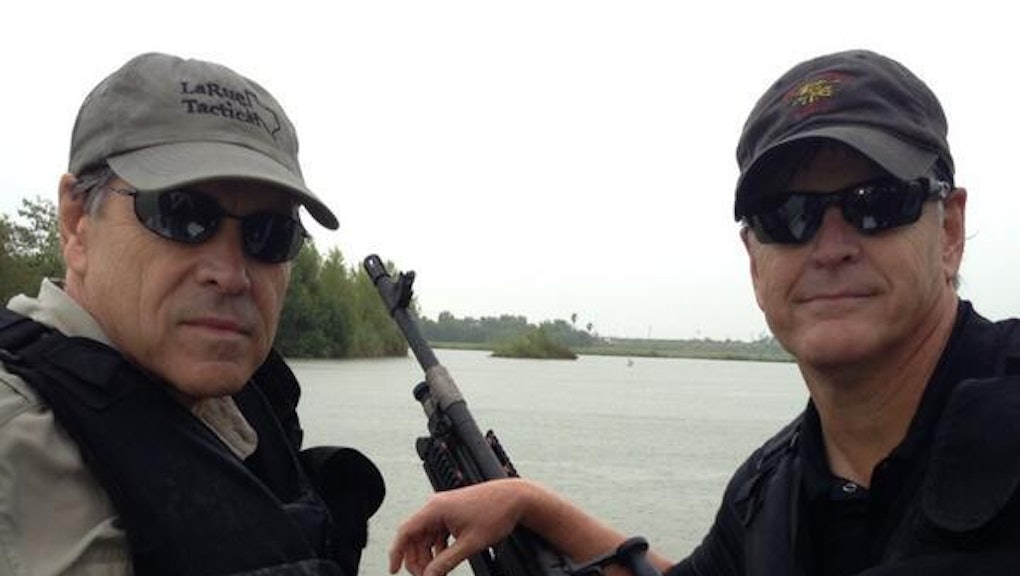 One Embarrassing Image Sums Up America's Disturbing Attitude Toward Immigrants

The news: So this happened.

And no, these aren't freeze frames from your nightmares. They're actual things that happened this week at the U.S.-Mexico border.

Why? These photos are pretty horrifying responses to the recent surge of Mexican and Central American immigrants into Texas and Arizona. They come shortly after Governor Perry met with President Barack Obama to criticize the president's "failure" to "secure the border."

Here's how that meeting went:

Background: The irony of the situation is who Perry and Hannity are "protecting" us from. The recent influx of immigrants consists mainly of unaccompanied children fleeing poverty, gang violence and instability in El Salvador, Guatemala and Honduras.

The UN is currently working to classify these kids as "refugees" — which is what they are.

But thanks for protecting us, governor! We know there's nothing scarier than a bunch of terrified refugee children.

More: Observers of the situation predict that 60,000 unaccompanied minors will be detained crossing the U.S. border by the end of 2014. The numbers are already startling: According to reports, 400 kids were caught in Texas' Rio Grande Valley on just a single day in June, and over 37,000 were detained between October 2013 and June 2014.

Obama has declared it an "urgent humanitarian crisis," and recently requested $3.7 billion from Congress to address the issue. The influx has become so overwhelming that established detention centers are over capacity, and border patrol officials are scrambling to find alternative holding centers for processing and deportation.

Also: The children have not been met with open arms.

Case in point was this scene from Murrieta, Calif., last week, when over 100 anti-immigration zealots blocked three buses carrying detained women and children from entering a processing center:

The route was blocked for so long that the buses had to turn back and go to an alternate center in San Diego County. Welcome to America, boys and girls.

The problem: These reactions encapsulate the increasingly troubling attitude many Americans have toward Latin American immigrants. The protests and "homeland security" rhetoric not only reflect illogical anxieties around the theft of American jobs and resources, they also smack of xenophobia and racism.

But the image of an elected official purporting to "defend" America with heavy weaponry is especially absurd. First of all: Calm down, Rick. Second of all, the border's heightened militarization is a key ingredient in the startling number of immigrant deaths plaguing our southwestern deserts lately. It's certainly not something to flaunt, or to celebrate.

And all told, it completely minimizes the human cost of the influx: The broken families, the gang violence, the lethal danger of the journey and the very real possibility that it was all for nothing. It's increasingly clear that a humanitarian solution is necessary, but apparently our government is unwilling to let that happen.