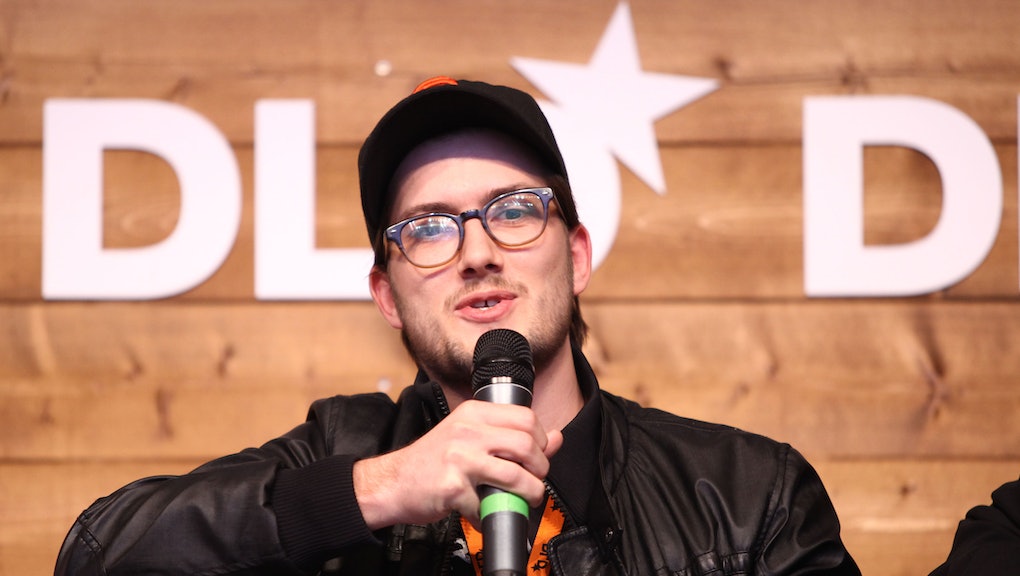 On Wednesday, representatives from more than 700 independent record labels signed the "Fair Digital Deals Declaration." The statement, mocked up by the Worldwide Independent Network, ensures fair and transparent compensation for musicians' digital downloads and streaming revenue. The declaration basically prevents record labels from using murky digital copyright laws to exploit artists' music online. Turns out there was good reason for it.

According to a report in Bloomberg News last week, Sony, Universal and Warner — the "big three" record labels, which control 89% of global music sales — are nearing a deal with SoundCloud, the popular Berlin-based music site that since 2007 has allowed its 250 million monthly users to upload and stream music. The deal would grant SoundCloud licenses to play big three-copyrighted music (and "avoid legal trouble") in exchange for a 3-5% stake for each company in SoundCloud's estimated $500-600 million net worth (plus a chunk of future revenues).

That's $15-30 million per record label to not sue SoundCloud. The kicker? The musicians might not see a dime of it.

Like most any sound-sharing platform that came before it (including MySpace, which it utterly destroyed), SoundCloud is neat because it allows previously unknown musicians to become DIY stars overnight. It also, however, opens the door to a lot of copyrighted content to be made freely available on the web. That's why the labels are interested.

But SoundCloud's first and primary function was collaboration, specifically through remixes. For this reason, it needed to be legally hands-off; to this day, when users upload audio to SoundCloud, they grant the site a "worldwide, royalty-free, fully paid-up" license to stream their content. They also accept responsibility for their upload. This one-two punch clears SoundCloud from both royalty obligations and (sort of) legal liability.

The obvious consequence of such infrastructural openness is that any old schlub can upload any old song whenever he wants, like this very much copyrighted one by Metallica, some of music piracy's most outspoken detractors:

Of course, major labels have tried vehemently to prevent these crimes against humanity. Back in January, SoundCloud implemented overly sensitive content ID software, which scans websites for copyrighted material and removes any hits (or, in this case, anything that might be mistaken for a hit). And last month, Universal came under fire for their "trusted sender" program, which allows labels to issue takedown notices in bulk without SoundCloud sifting through the pile for exceptions.

But the big three's new deal could be their most egregious yet: They've effectively bullied SoundCloud into paying royalties without calling them such — without addressing the bands' cut. At least when Universal was quietly weeding their music from SoundCloud, they weren't getting rich in the process. (In fact, they were probably losing money; free streaming and illegal downloads have been known to boost legit album sales.) But now, by exchanging legal immunity for corporate ownership, the big three have monetized their gavel. It would be no different than if UMG kept 100% of the FM radio royalties to "Fancy" — and that's a ton of royalties.

This isn't to suggest that streaming services are a viable source of income for musicians. They aren't. At $10 a month per subscriber, the dollars just aren't there for most musicians. When cellist Zoë Keating tracked and published her streaming earnings last year, she ended up netting only $3,002 from 428,027 plays.

But if there's any money to be made at all, how could we justifiably let it slip into the hands of an increasingly irrelevant middleman? What's worse: While we bumble around trying to figure that out, we risk the loss of any music worth buying in the first place.

Correction: July 31, 2014 - An earlier version of this story cited a story that mistook SoundCloud's "Trusted Sender" program as granting Universal access to their servers, but a UMG spokesperson maintains that allegations of backdoor access are misguided.