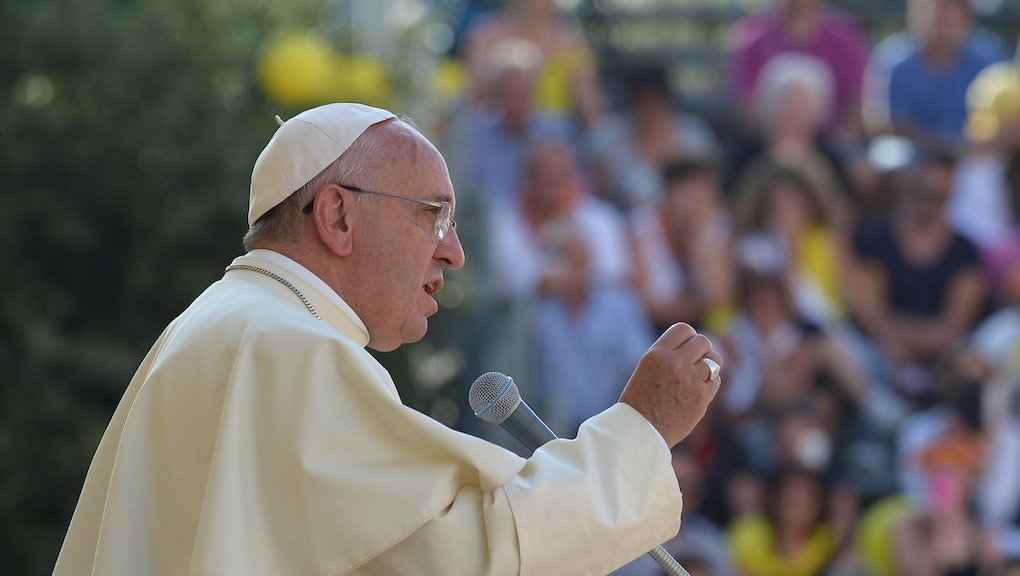 Pope Francis Calls for Action on the Humanitarian Crisis at the U.S.-Mexico Border

The line: "The attention of the international community [must be paid] to this challenge."

As America's immigration problem builds and the UN urges the U.S. to grant refugee status to the tens of thousands of Central Americans who have crossed the border, Pope Francis has finally decided to weigh in on this crisis.

On Monday, leaders from the Vatican, Mexico, Guatemala, Honduras and El Salvador held a conference on migration and development, specifically focusing on the brewing crisis on the United States' borders. Although Pope Francis did not attend, his papal envoy read a statement on his behalf, in which he stressed that "such a humanitarian emergency demands as a first urgent measure that these minors be protected and duly taken in."

"This is a category of migrants from Central America and Mexico itself who cross the border with the United States under extreme conditions and in pursuit of a hope that in most cases turns out to be vain," the pope added, referring to the fact that most migrants are unaccompanied minors.

The growing problem: U.S. authorities have already detained 57,000 unaccompanied minors since October — twice as much as the same period from the year before — and the number is expected to reach anywhere between 60,000-80,000 by the end of the year. Most of the minors hail from Guatemala, Honduras and El Salvador, where systemic poverty and gang violence have forced many young people to flee.

According to U.S. authorities, 82,000 migrants have already been sent back to their home countries this fiscal year. That's a costly process that doesn't actually solve the root of the problem: overburdened border controls, unrest in Central America and rampant rumors spread by smugglers that the U.S. will grant sanctuary to asylum seekers.

Under U.S. law, migrant children from Central America must be given a court hearing or allowed to stay. Because of the immense backlog, most are shuffled off to detention centers, where they have to wait for an indefinite amount of time.

What can be done? The White House has asked Congress to authorize $3.7 billion in emergency funding to address the crisis and cover costs such as increased patrols and air surveillance, legal aid to migrants, hiring immigration judges and care for the minors. But again, that's putting a band-aid on the problem.

The issues leading to this mass migration are more deeply seeded, as Pope Francis argued in his statement on Monday. The pope, who is reportedly considering a trip to America's border region, has called for Central American governments to inform citizens about the reality of migration to north, as well as international cooperation to develop and stabilize the region. That means bringing the U.S. government to the table to develop measures not only to maintain security in the border area, but also in the Central American region — but given that Congress can't even seem to manage the former, it remains to be seen what they can do about the latter.