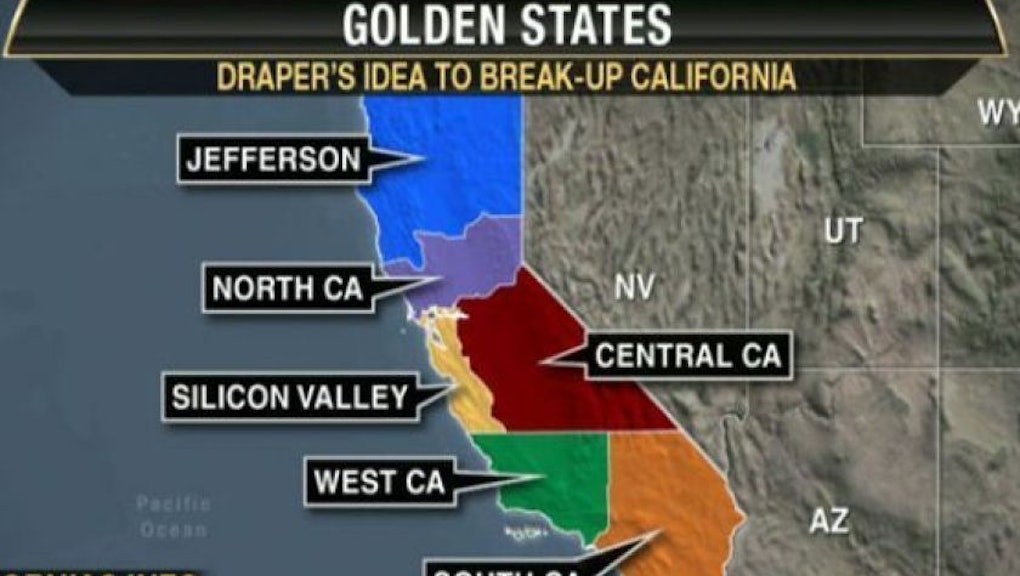 The news: If one billionaire activist has his way, the state of California may look very different in the not-so-distant future. A new initiative to divide the Golden State into North California, Silicon Valley, Jefferson, Central California, South California and West California is making legislative headway.

On Tuesday, Timothy Draper's pipe dream will inch toward reality when he submits more than 808,000 signatures for the Six Californias measure to go before state voters in two years. By having the division plans go up for a vote, the long-shot effort has the chance to stave off critics and ultimately let Californians decide the state's future.

What's the idea behind Six Californias? Smaller, localized governments. Roger Salazar, a spokesman for the Six Californias campaign, said that "the idea ... is to create six states with responsive local governments — states that are more representative and accountable to their constituents."

California is the nation's most populous state and the world's eighth-largest economy. Proponents say that Sacramento, the state's capital and governing body, doesn't properly represent every city or community within the huge region and doesn't understand the particular needs of each sector.

Chopping up California would prompt smaller and more efficient governing bodies, supporters believe. According to Mic's Jeff Fong, "Smaller jurisdictions means the ability to better tailor policy to local concerns. The more centralized policy-making becomes, the more one-size-fits-all prescriptions get handed down, which may or may not meet the needs of diverse constituents."

The split would lump the San Francisco Bay Area and Silicon Valley in their own eponymous state. Jefferson, named after the third U.S. president, would be the northernmost region. Sacramento would anchor North California. Los Angeles would be in West California, while San Diego and L.A.'s eastern suburbs would be in South California.

For and against: According to Draper, he knows that he is waging an uphill battle, but also that private polling showed some conservative areas in favor of the measure. After committing $1.3 million to the cause, he is dedicated to seeing the initiative through.

A 2013 Field Poll determined that 59% of Californian residents are opposed to the idea of splitting up the state. And even if Draper convinces the majority of voters to back the measure, he would still need both Congress and the state legislature to approve the change.

Besides politicking, the border shift would be extremely expensive for a state that is already suffering, incurring costs through the transitions and implementation. Fong reported that "each new state would need to take over responsibility for services currently administered from Sacramento. Responsibility for things like roads and other infrastructure would have to be apportioned and existing state-owned properties divided up. The process would be complicated and time-consuming, but not impossible."

The idea to split up the Golden State is rooted in decentralizing the state's government to make it more efficient. Draper's Six Californias measure has a long road ahead even after Tuesday's step to include it in the general elections. But Draper is pursuing it nonetheless.

"This is not going to happen overnight," he said.  In any case, the more than 800,000 supporting signatures mean that Californians will choose for themselves in November 2016.