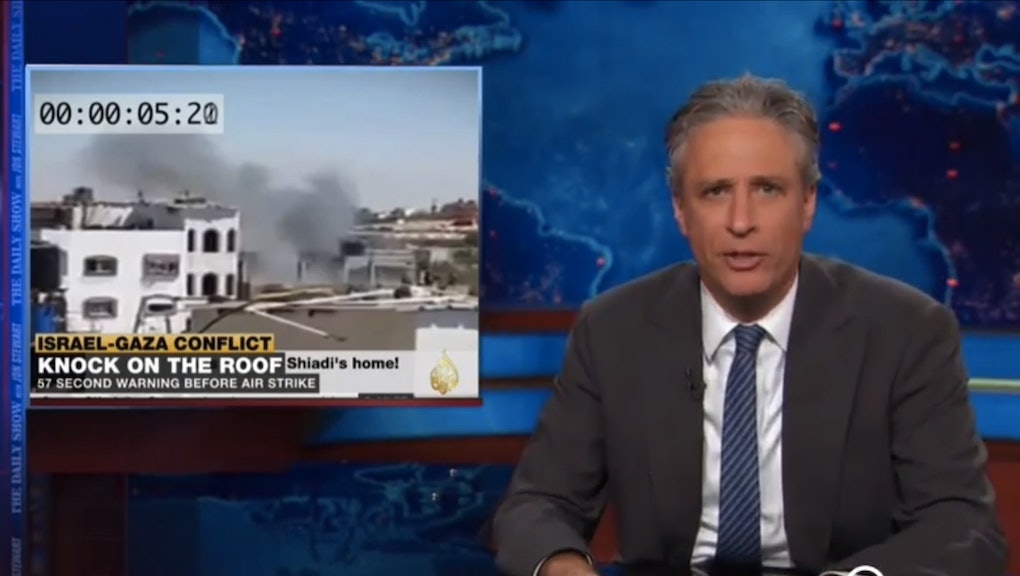 Leave it to the Daily Show's Jon Stewart to be the person to perfectly sum up the current situation in Gaza.

On its first episode after a two-week break, Stewart picks apart the hot-button headlines that he missed while he was away — including Israel's bombardment of Gaza, which first began on July 8.

We first see an announcer repeating a line familiar to anyone that has been following the news from Gaza: "Israeli tanks are positioned outside the entrances to Gaza, waiting to invade, as the aerial bombardment from both sides continues."

It's technically true: While Israeli forces have been relentlessly striking the Gaza Strip, Hamas has bombarded Israel with rockets.

Image Credit: AP. An Israeli woman inspects the aftermath of a rocket fired by Palestinian militants in Ashdod, July 15.

But as Stewart points out, it's also highly misleading to present the Palestinian and Israeli experiences as equivalent, when in fact there is a dramatic and fundamental disparity between the two.

Stewart points out that while Israelis can download an application on their mobile phones to show them the places where Hamas rockets are landing, Palestinians in Gaza have been warned of attacks with "a smaller warning bombing" — an "amuse-bomb, if you will," he jokes.

It's an inequality that's hard to ignore. Take the tragedies of the past few weeks: Israel's Operation Protective Edge has now killed 194 Palestinians and injured 1,485, 80% of them being civilians.

Image Credit: AP. A man carries the body of four-year-old Sarah Omar el-Eid, killed along with her father and uncle by an Israeli air strike, July 15.

On the other hand, thanks to Israel's sophisticated military, much of the militant group's offensive has been intercepted, mostly avoiding tragedy, apart from an Israeli man who was killed today while delivering food supplies to the country's soldiers at the border.

In a scramble to present "both sides" of the story, media outlets have a tendency to place the same amount of weight on Palestinian and Israeli narratives. While both stories deserve to be told, equating them only helps ignore the vast difference in reality between the two.

That false balance also helps obscure the reality of what's actually going on. As Stewart explains in the clip, the "exchange of fire" here is between two types of weapons that cannot even be compared. Hamas rockets are generally crude devices, incapable of causing vast damage, though the organization's arsenal has expanded to include larger and more accurate models. Israel, on the other hand, has one of the most powerful armies in the world. The vast difference between the two was laid out when a Hamas drone, the first to have been launched from the Gaza Strip, was shot out of the sky by a $1 million Patriot missile.

This sort of narrative also helps ignore the reality of life in Gaza, and not just during times of war. The Gaza Strip's 1.8 million residents face basic human rights troubles, including food insecurities and water shortages. It is certainly frightening for Israeli civilians to live under the uncertainty of rockets, but Palestinians do not have the same might protecting them from Israel's deadly air strikes. It's an inequality that's important to keep in the narrative, no matter which story we are telling.

It's a story that deserves to be told correctly.