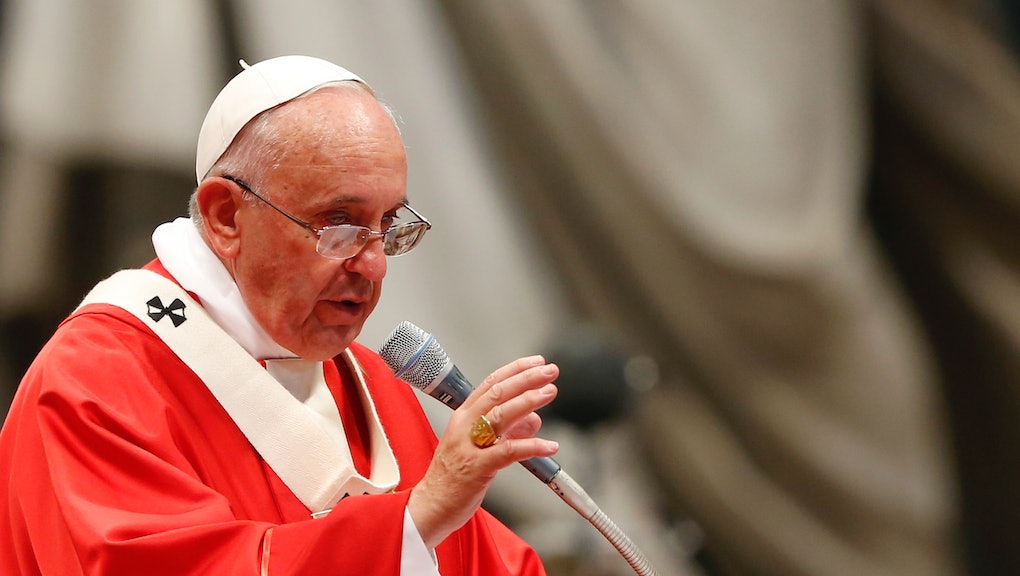 The news: Once again, Pope Francis is seeking to bring the papacy, the Vatican and the Catholic Church into the 21st century. In an interview with La Repubblica editor Eugenio Scalfari, Pope Francis reportedly hinted at doing away with the celibacy rule for priests.

Adding to his ever-growing list of radical statements, the pontiff said, "There definitely is a problem, but it is not a major one. This needs time, but there are solutions and I will find them," referring to the issue of priesthood celibacy. His latest announcement seeks a remedy for old-fashioned rules that prevent the Catholic Church from moving forward.

What else did he say? In the interview, Pope Francis suggests that eradicating clerical celibacy is only the tip of the iceberg. He also claimed that in the future he hopes to lift the marriage ban for priests.

Additionally, the pope is quoted as saying that "about 2%" of Catholic Church clergymen are pedophiles, and that the abuse of children was a "leprosy" infecting the Church, according to the BBC. He added that he would tackle that issue "with the severity it demands."

It is worth noting that Pope Francis's interview was with 90-year-old Scalfari, a famous atheist, and the quotes are not a precise transcript from their encounter. Rather, what was printed is a result of Scalfari's memory. A Vatican spokesman said that the quotes attributed to the pontiff were not his exact words.

The background: The latest news affirms a position on priesthood celibacy that Pope Francis announced in May when he said, "It is a rule of life that I appreciate very much, and I think it is a gift for the church. But since it is not a dogma, the door is always open."

The Vatican has a history of being inflexible on the issue. But the doctrine, adopted 900 years after the death of Jesus, is largely seen as a business decision by many historians. According to the New York Daily News, "the Vatican simply did not want priests to marry and have heirs because they wanted all the clergy's property and wealth to be bequeathed to Rome."

Even Pope Francis himself has backed the idea; in a published conversation from before he assumed the papacy, he wrote that he supported celibacy "because there have been 10 centuries of good experiences rather than failures… But it is a question of discipline, not faith, and it could change."

Whether or not his remarks to Scalfari are direct quotes, the sentiment the pope wants to impart is clear: Priesthood celibacy and the marriage ban are old schools of thought. And this pontiff wants out with the old and in with the new.