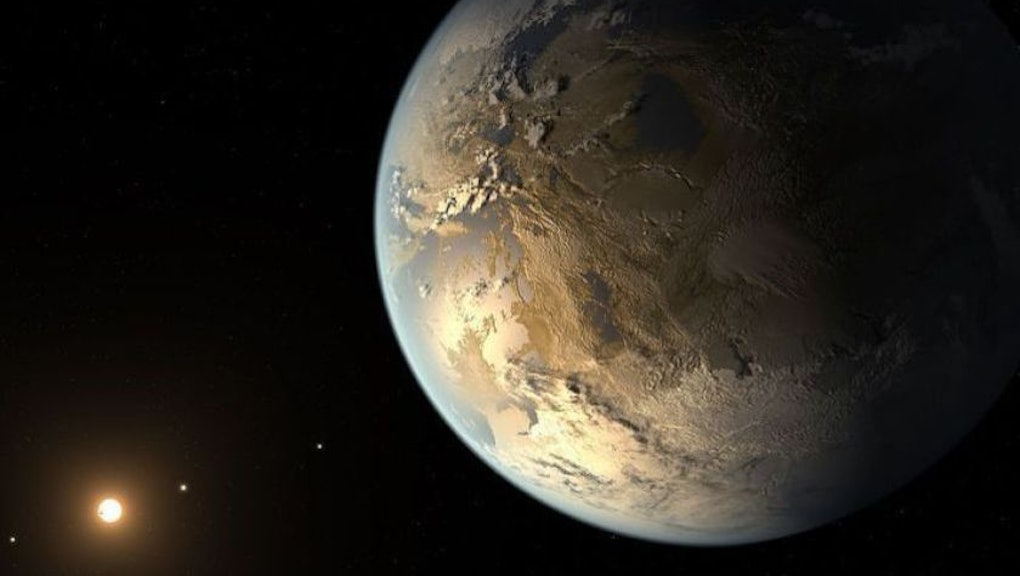 NASA: We'll Prove We're Not Alone in the Universe Sooner Than You Think

The news: NASA scientists claim that within 20 years, the space agency will likely have evidence of at least one other Earth-like planet.

"We believe we're very, very close in terms of technology and science to actually finding the other Earth and our chance to find signs of life on another world," Sara Seager, professor of planetary science and physics at the Massachusetts Institute of Technology, said at a recent panel discussion held at NASA headquarters in Washington. NASA astronomer Kevin Hand emphasized that, "I think in the next 20 years we will find out we are not alone in the universe."

Here's the science: NASA isn't necessarily talking about finding aliens, though that remains a small yet tantalizing possibility. Instead, they mean that they will likely discover that the chemical building blocks of Earth-like life and the planetary conditions to support it are widespread throughout the universe.

"We already know that our galaxy has at least 100 billion planets, and we didn't know that five years ago," explained Space Telescope Science Institute director Matt Mountain at the NASA panel. He's referring to a 2012 study by an international team of astronomers that concluded a minimum of 1,500 planets are likely within 50 light-years of Earth. Meanwhile, space scientists are quickly realizing that some of these terrestrial worlds exist in the habitable zones — where water could exist in liquid form — of other stars.

Another study recently discovered that grains of space dust drifting throughout our solar system contain tiny pockets of water, implying that life could exist throughout the cosmos. Professor Hope Ishii of the University of Hawaii in Honolulu, one of the researchers behind the space dust study, told New Scientist that it was "a particularly thrilling possibility that this influx of dust on the surfaces of solar system bodies has acted as a continuous rainfall of little reaction vessels containing both the water and organics needed for the eventual origin of life."

And here are the counterpoints: There's ample room for caution. For one, none of this evidence actually demonstrates that life would be likely to develop on these potentially habitable worlds. Physicist Ofer Cohen and his team found that extreme solar weather may be more common than previously thought, which would decrease the number of planets where life could have had a chance to develop.

Other scientists believe that life may exist but could be very rare or so different that we would lack the capability to detect it. And some have suggested that all the supposed evidence about the commonality of life is actually just cognitive bias: Since life on Earth is widespread, we may be buying into an illusion that the same is true throughout the Milky Way. Life throughout the universe could ultimately prove to be patches of lichen in a barren wasteland. The organisms we do find in the distant future, if they even match our definitions of organisms, could be a huge disappointment.

Why you should care: NASA head Charles Bolden counts himself among those scientists who believes it is "highly improbable in the limitless vastness of the universe that we humans stand alone." Even if he's wrong, humans should be very interested in research about possible life on other worlds.

Think of it this way: If life is common, the ramifications are huge. Humanity would have to radically re-adjust its self-perception among the cosmos. If it is uncommon, and we're probably totally alone in the galaxy, life would become an even more special thing. Either way, wouldn't you want to know?