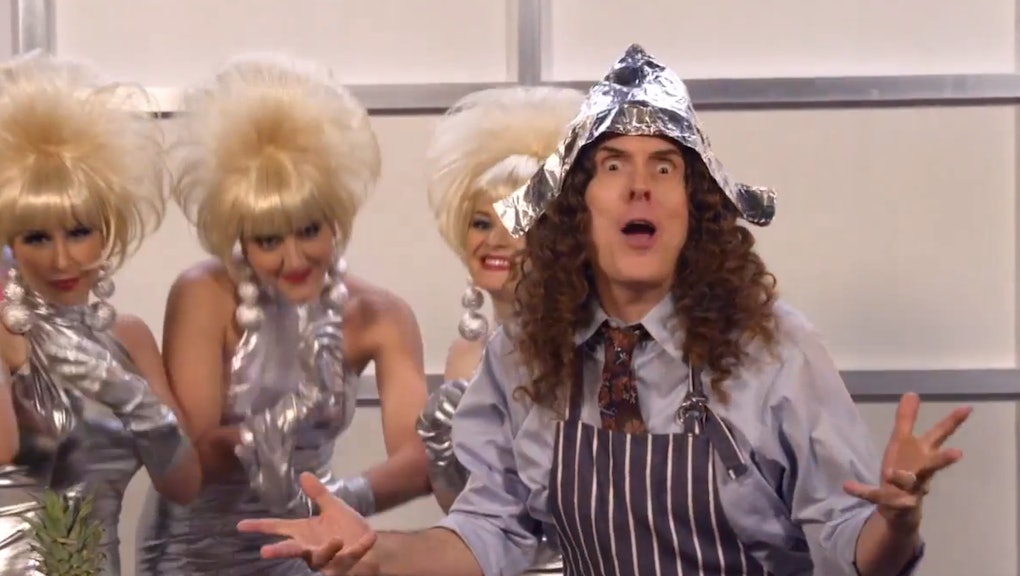 Every few years, the god of musical parodies returns to the airwaves to hold up a mirror to the current state of pop and enhance it with a few clean jokes. Weird Al Yankovic is currently on a ridiculous streak. Today, he released the third of eight consecutive videos from his new album Mandatory Fun. Today, he blessed the internet with his greatest new rendition thus far: Lorde's "Foil"

"Foil" is a triumph. Following his well-known modus operandi, Yankovic turned Lorde's dark horse hit "Royals" into a song that deals with the myriad uses of aluminum foil, starting with food preservation and ending with the tinfoil hats that keep The Man from reading your thoughts. So far, Yankovic's parodies have targeted big, mainstream radio hits like "Happy" by Pharrell and "Blurred Lines" by … Pharrell, again. But "Royals" was a grassroots hit that Lorde described as "a response to everything that's on pop radio." That's a mission that clearly resonates with Weird Al. The restless, heartfelt lyrics of "Royals" drew fans everywhere as Lorde reminded the world that "Pop music doesn’t have to be stupid." Well, Weird Al is here to remind us that, even if it isn't stupid, we can still mock it without being mean.

In "Foil" Yankovic gradually turns a TV cooking demonstration into an impromptu exposé on the shadow organizations that secretly control the world. The show's producer, played by Patton Oswalt quickly catches on and shuts it all down, but not before Weird Al can sport that tinfoil hat on camera for a few precious seconds.

What better fitting crown for the king of parody?