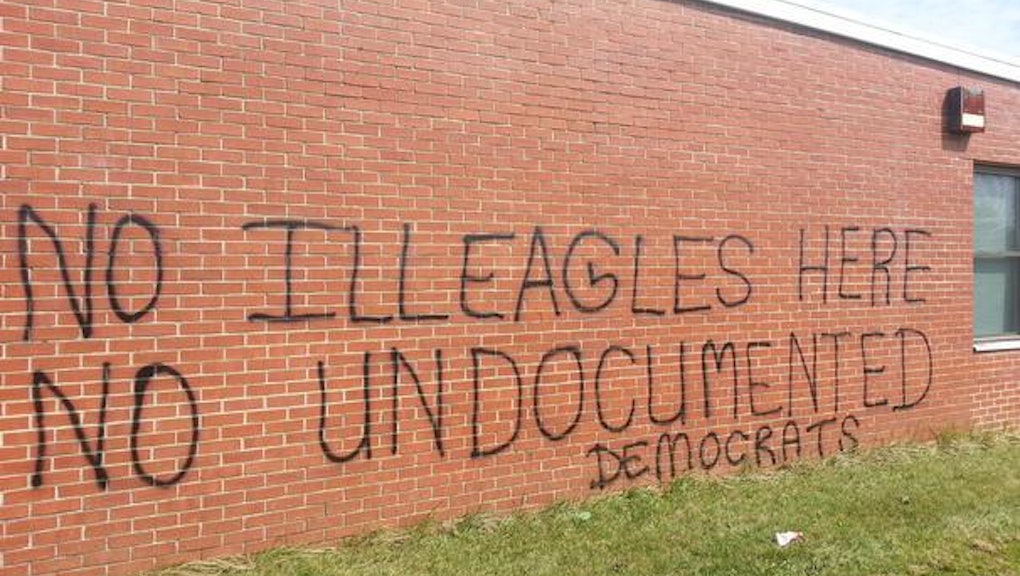 This Was a Very Bad Week for Immigration Reform in America

"I was actually able to see some of the children in the buses. The fear on their faces ... This is not compassion."

That's what Arizona state legislator and Republican congressional candidate Adam Kwasman told a reporter after his sad run-in with a bus full of child migrants. Earlier, he tweeted, "Bus coming in. This is not compassion. This is the abrogation of the rule of law."

Only one problem: Those weren't child migrants. They were local schoolkids heading to a YMCA camp. See the cringeworthy reaction here when Kwasman learns of his mistake:

More stupidity: Something about the immigration debate — the meeting of culture, race, socioeconomics and nationalism — really seems to bring out the idiocy in people. Take this graffiti in Maryland. (Rest assured, the "speak English!" irony did not go unnoticed.)

We also have Congressman Phil Gingrey (R-Ga.), who warned that child migrants might be carrying the deadly Ebola virus, which has only ever affected humans in sub-Saharan Africa. Mother Jones has a helpful map noting the difference between there and Central America if you're still concerned:

Gingrey went on to warn of unvaccinated child migrants infecting Americans, even though children in Guatemala, El Salvador and Honduras are actually more likely to be vaccinated than American children. That, and Gingrey has worked with an organization that opposes mandatory vaccines and once wrote an amendment to allow parents to stop their children from getting the HPV vaccine. It seems shots are only important when you can use them to scare people about supposedly diseased immigrants.

And then we have the strangely persistent conservative meme that child migrants, um, aren't actually children.

Adults and children, it should be noted, are kept in separate locations in immigration detention. And no, this does not mean that you should go looking for those children at the nearest YMCA.

The crisis: The U.S. has detained 57,000 unaccompanied minors attempting to get into the country since October, already twice as much as during the same time period a year earlier. The children are generally sent from Guatemala, El Salvador and Honduras to escape gang violence and poverty.

One thing you won't hear from conservative critics — but will hear plenty about from immigrant advocates on the left — is that President Obama has deported more immigrants than any other president in U.S. history. This fiscal year alone, 82,000 Central American migrants were sent back to their home countries.

The president is asking for $3.7 billion in emergency funding to address the crisis, but Republicans in Congress are balking at the price. If the past is any indication, you can expect plenty more stupidity as the fight continues.